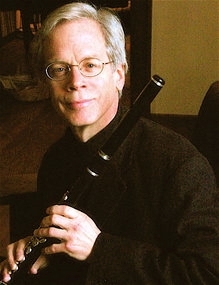 Christopher Kantner received his musical training at the Peabody Conservatory, the University of Michigan and S.U.N.Y. Stonybrook where his teachers were Bonnie Lake, Keith Bryan, Clement Borone, Samuel Baron and Albert Tipton. He studied most recently with Jacques Zoon of the Boston Symphony, working with him on reintroducing the wooden flute as a solo and orchestral medium.

Since joining the Grand Rapids Symphony as Principal Flutist in 1976, Mr. Kantner has made numerous solo appearances with the orchestra, playing works of Bach, Mozart, Lucas Foss, Nielsen, Martin and Schoenfeld. His work as a soloist and chamber player is well known to Michigan audiences through his association with the Fontana Ensemble and as a charter member of  Baroque and Beyond,  the Mackinac Trio, and the Hartwick Duo.

A Naumburg finalist, Mr. Kantner has been a fellow of the Aspen and Bach Aria Festivals. He has appeared with the Bach Aria Group in a cycle of the complete Brandenburg Concertos and as Principal Flutist and soloist with the Colorado Music Festival.  Mr. Kantner's other solo appearances within Michigan include the Ann Arbor Symphony and Lansing's Renault Chamber Orchestra. He has held appointments on the faculties of Interlochen, Grand Valley State University and Michigan State University.