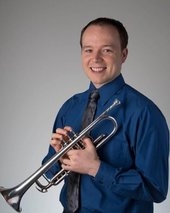 Alex Wilson, trumpet professor at Grand Valley State University, holds a Bachelor's degree from GVSU, and a Master's degree and Doctorate of Musical Arts from Arizona State University.  Alex has played with the Arizona Opera, the Phoenix Symphony, the Holland Symphony Orchestra, and currently subs with the Grand Rapids Symphony.

He has also toured Asia with the Shen Yun Performing Arts as well as performed as soloist for the Shen Yun Symphony Orchestra during two national tours, at venues including Carnegie Hall and the Kennedy Center.  Alex was a performer at the 2013 International Trumpet Guild conference in Grand Rapids.