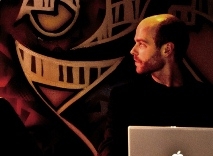 Nathaniel Bliton is the Equipment & Performance Space Technician for the Department of Music, Theatre, and Dance at Grand Valley State University. At GVSU, Bliton is responsible for audio/video recording, production and inventory, managing the stage for many performances in the Louis Armstrong Theater and Sherman Van Solkema Recital Hall, and the inventory and maintenance of equipment between the Music and Dance areas.

He holds M.M. and B.M. degrees in Music Composition from Michigan State University, and is an active performer, composer, educator and hobbyist. He has written music for and performed in many settings, including a variety of Michigan Orchestras, chamber music groups, Indie Rock and Folk bands, Salsa and other Latin music ensembles, theater companies, film scoring and sound design projects, dancers, and live improvising painters. With a special emphasis on interactive, low-budget physical electronics, his programming and electronics work has been featured in Make Magazine, appeared in art installations and professional theatrical productions. Additionally, he has instructed individuals and groups in computer music composition and open-source hardware in settings ranging from college courses to middle-school after-school workshops and individual lessons. Recently, he has presented on Arduino as an inexpensive hardware platform at the United States Institute for Theatre Technology conference in Long Beach, CA, and has performed in premieres of his music with Dr. Geoffrey Deibel at the University of Florida in April 2012, and with the ensemble Triola at the Taneycomo Festival Orchestra in June 2012.