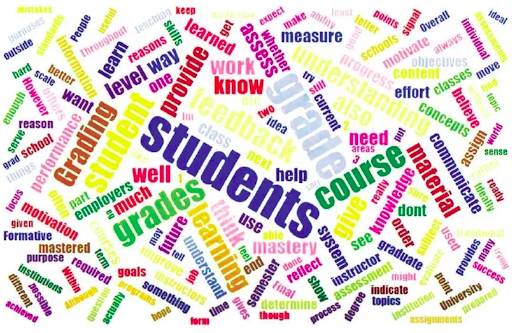 Across the globe, faculty are rethinking how they assess student progress.  The GVSU Mathematics Department is playing a leading role in the conversation, with many faculty using new approaches to assigning grades, including what has often been called “mastery grading”.  Perhaps a better term is “alternative grading”.

Alternative grading is a way to make grades more meaningful, fair, and equitable. Professors engage in alternative grading when they respect how people actually learn: clearly stating goals on each assessment, giving feedback that students can actually use, and allowing multiple chances (without penalty) to demonstrate learning, even if it takes extra time for the student and the professor.

The GVSU Department of Mathematics has long been filled with thoughtful and reflective teachers who really care about students.  Indeed, we are a department that operates on two foundational principles: (1) students and their success are our primary focus and (2) we embrace taking creative risks with our instruction or course design if it looks like they may be helpful to students and their success. In a lot of ways, alternative grading is just an expression of that culture -- we're focused on growth and innovation, so we find a lot of affinity with alternative approaches to grading that put growth at the center and normalize risk-taking and don't punish failure when it happens as the result of a good-faith effort to grow.

Collectively, many of us have realized just how bad traditional grades are for both learning and motivation, so we have felt compelled to find a better way. Once we started to figure that better way out, it has spread quickly – locally and globally. Also, across the country, there seem to be an especially large number of mathematicians interested in alternative assessments.

In 2020, GVSU hosted the first mastery grading conference in mathematics.  While originally planned in person, COVID forced the conference online, where it was held in both 2020 and 2021.  Starting this year, the conference is called “The Grading Conference”. Robert Talbert's blog post – A Word About Words – gives good background on the name change from the former “Mastery Grading Conference”, which will also occur online via Zoom to increase accessibility and affordability for attendees.

When asked about the biggest highlights from the 2020 and 2021 events, Prof. David Clark said, “... how interactive, enthusiastic, and engaged our attendees are. I've never seen anything like it, in person or at other online conferences. We've had over 500 attendees each year, and they take full advantage of our two days together. Zoom chats during the sessions move so fast that they're hard to follow, full of people sharing and discussing ideas. Q&A sessions are overflowing and filled with thought-provoking ideas.”  Prof. Robert Talbert added, “... how much *fun* we all had. Unlike most conferences, there was actual community taking shape and you could really sense that there was a hunger for what people were speaking about, just an overall clear recognition that it's time to blow up the way we do grading and replace it with something better.”

Other highlights include keynotes by people such as Linda Nilson (author of Specifications Grading, one of the approaches that many of us use) and Josh Eyler (author of How Humans Learn). They have each had a huge impact on many of us as we think about assessments, and especially how to humanize them.

The first conference in 2020 was originally going to be a small in-person event in downtown Grand Rapids. Professors Clark and Talbert were “basically planning to invite a bunch of friends and colleagues to talk about alternative assessments and enjoy great restaurants and breweries.”  Then COVID hit, and they had to move the conference to Zoom on incredibly short notice (they wrote an article about that). After keeping it free and sending out the word on social media, 500 people registered!  There was huge demand, especially after so many people struggled with assessments in the Big COVID Pivot.  Prof. Talbert adds, “the pandemic made the urgency of our message -- that grading is broken and it needs to be repealed and replaced -- all the more urgent, since it was against a backdrop of students having tremendous struggles with, well, everything. And there was (still is) a sense that, as long as everything else is being upended, we might as well revolutionize grading while we're at it.”

They got a lot of positive feedback: how well-organized the online conference was, how accessible it was for people who didn't have the resources to register for an expensive conference or travel to Grand Rapids, and how useful and important the assessment ideas are. With more than 500 participants in 2021, they’ve been online ever since, and don't have plans to go back.  Now there are even two different conferences, tailored to different needs: one aimed at higher education STEM faculty, and one for K-12 teachers.  Everyone reading this article is invited to attend:  come learn about ways to make your assessments more meaningful, fair, and equitable! We have concrete examples, resources, and support to help you make it happen.

All of the key ideas in alternative assessment apply to K-12 as well as higher education: connecting assessments to clear criteria (standards), giving helpful feedback, getting rid of partial credit and replacing it with progress indicators, and allowing students to make new attempts to show their learning (without penalizing them for needing that extra time). These don't require a huge amount of work either: making even a small move in one direction, such as finding a way to let students reattempt some key assignments, can have a big impact.

For the most part, K-12 is far ahead of higher education in terms of adopting better assessment practices (especially what's usually called "Standards-Based Grading", which is used widely in K-12). We would love to hear from readers about what they can tell us! But if they're new to these ideas, we have a K-12 focused conference as well.

Prof. Clark gives a final pitch for alternate grading practices: “When I moved my classes online due to Covid in March 2020, a lot of things had to change. But one thing that *didn't* need to change were my assessments. The alternative assessments I used were already set up to support students who needed more time and flexibility." As another math professor, Joshua Bowman at Pepperdine University told us, his alternative assessments ‘exhibited flexibility in extreme circumstances’, where they had a dress rehearsal for Covid, in the form of two weeks online due to wildfires near campus.

In 2022, it's time to move from thinking about changing the way we grade, to actually doing it. We don't need any more empirical or anecdotal data than we already have, to know this is the case. The upcoming Grading Conference is your invitation to plug into a community that is making this happen, so that you can make it happen too.


Page last modified April 8, 2022
Report a problem with this page