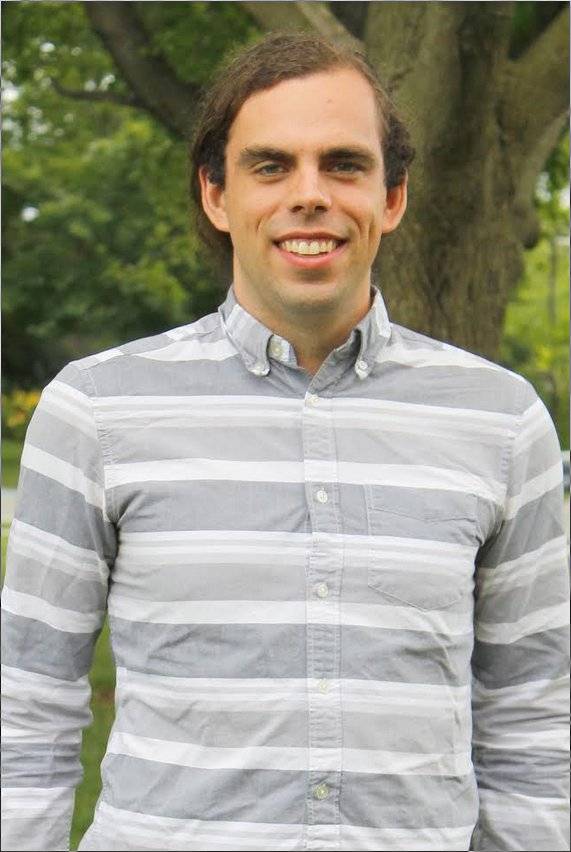 Casey Koch-Larue, of Grand Rapids and a graduate of City High School and City Middle School, is the 2018 GVSU Outstanding Graduate in Mathematics.

A double major in mathematics and philosophy, Casey finds mathematics appealing because it involves attending to abstractions in a very precise way (which differentiates the subject from philosophy). In his younger years, he distinctly recalls learning about and discovering for himself some of the many beautiful patterns found in Pascal's triangle. His natural love for mathematics made it an easy choice as one of his majors in college.

In the math department at Grand Valley, Casey has appreciated the small class sizes and the deployment of collaborative learning activities during class, as these make for a pleasant classroom environment. He has also benefited from the liberal arts emphasis of the university by taking classes outside of his main interests in order to expand the domain of his thinking.

Casey has especially enjoyed taking a wide range of advanced courses in mathematics. He says that the two modern algebra classes (MTH 350 & 450) helped develop his broad interests in abstract algebra, and that Linear Algebra II (MTH 327) enabled him to understand some of the important aspects of linear algebra over the real and complex numbers. Real Analysis (MTH 408 & 409) pushed him to grow in a number of ways, including writing clear, rigorous proofs, and Complex Analysis (MTH 402) offered a very different perspective on analysis. Casey even took both of our capstone courses, MTH 495 and 496, and found that 495 gave him an opportunity to develop a better background understanding of the enormous field of mathematics, while 496 presented an opportunity for a research experience within the GVSU curriculum.

Beyond his class experiences, Casey found that his time in the GVSU S3 (Student Summer Scholars) program shaped him considerably as a learner and person. He shares that “undoubtedly the experience in summer 2017 with Dr. Steven Schlicker has shaped me most as a prospective mathematician. The continual engagement with a new subject matter in mathematics, with its challenges and successes, helped me understand mathematics as a practice.” Casey has had numerous opportunities to attend conferences and give presentations; conferences have been a rich source of ideas and provide one way for him to gain insight into new areas of mathematics. One of the presentations he gave was at the West Michigan Regional Undergraduate Science Research Conference where only four students are selected to give oral presentations. Casey’s talk was received very positively by an audience of mostly scientists. He also received the Ronald Mosier Award for best undergraduate talk at the recent Michigan Undergraduate Mathematics Conference held at the IL-IN-MI MAA TriSection Meeting at Valparaiso University.

Casey will be going to graduate school to pursue a PhD. in mathematics with the goal of becoming a university professor at a university where he can engage regularly in conducting research.

The GVSU math department congratulates Casey on his outstanding work and thanks him for all of his excellent contributions to the department. We wish him the very best in his future endeavors, particularly those in mathematics as he pursues further study and new adventures.