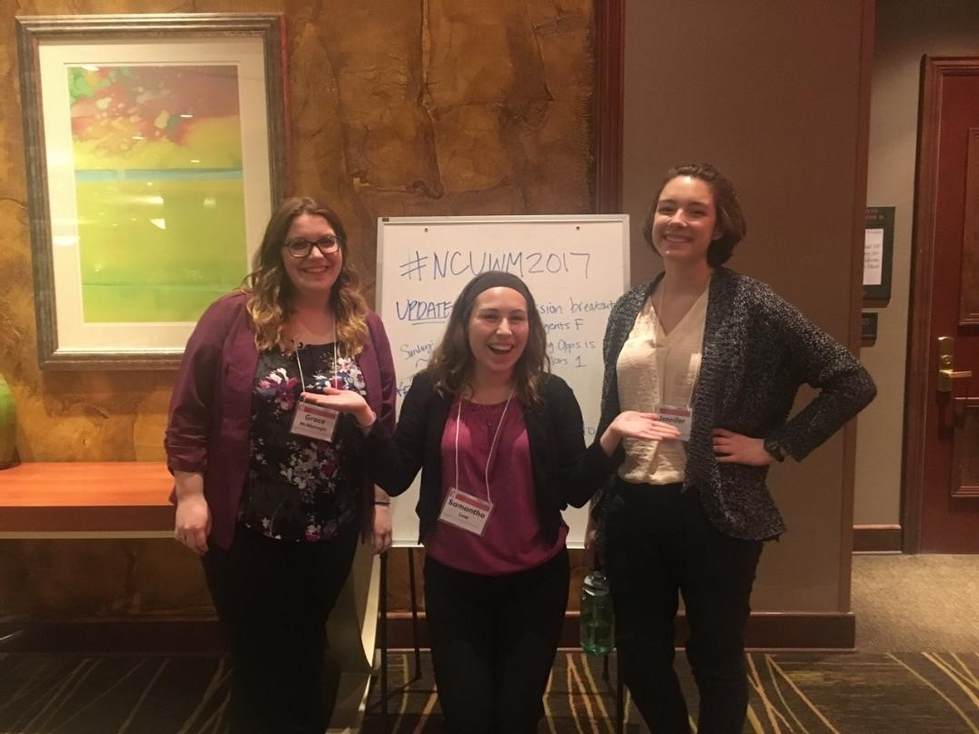 The Nebraska Conference for Undergraduate Women in Mathematics (NCUWM) is hosted yearly by the University of Nebraska-Lincoln. The conference aims to provide information and networking opportunities to undergraduate women mathematics majors to help them be more successful mathematicians and to encourage them to pursue graduate study. From GVSU, Samantha Law ’18, Grace McMonagle ’18, and Jennifer Moon ’17 attended the 19th Annual Nebraska Conference along with UNL-alumnus Dr. Lauren Keough. The group took a road trip to the conference in a van along with Dr. Stephanie Edwards from Hope College, and three other students from Hope College and Davenport University. 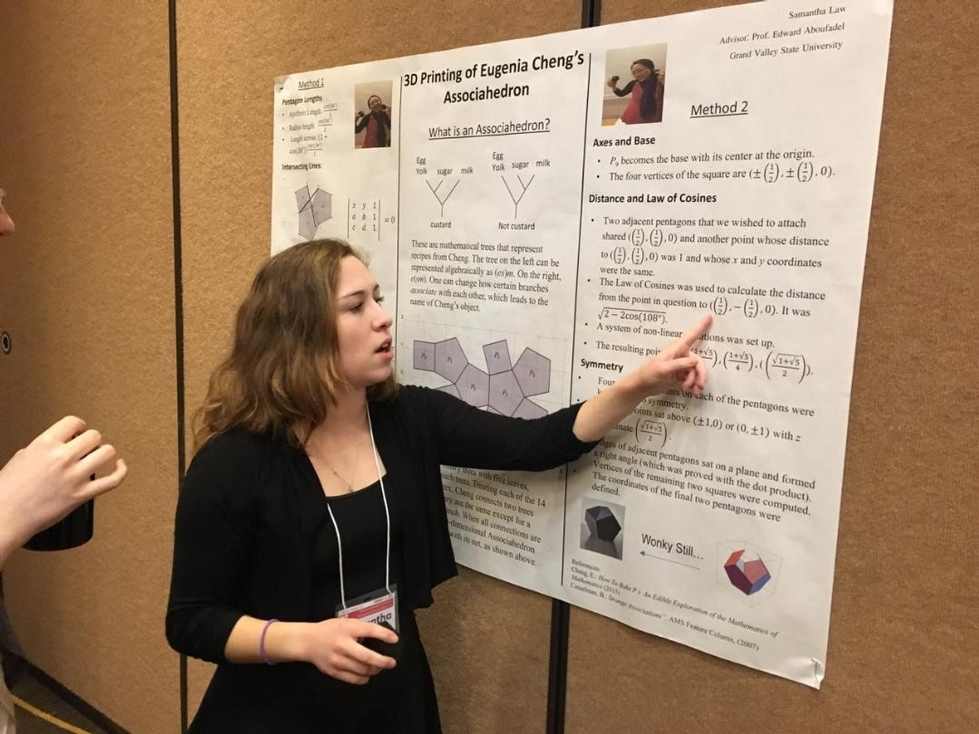 Dr. Keough has been attending the NCUWM since her days as a graduate student. When asked about what she enjoys about the conference, she said: “I really like the wealth of information and advice available to women at all stages of their career and the networking that happens there. For me, the conference always reenergizes me by reminding me why I love what I do.”

The conference also gives attendees a chance to present their research. Samantha presented research she conducted with Dr. Edward Aboufadel on trying to construct Eugenia Cheng’s associahedron. Samantha said, “The conference showed me that I had many different options for my future, whether it be a job or graduate school. I am very excited about my future in mathematics.” Moreover, she said she left the conference feeling much more confident in herself and her major. 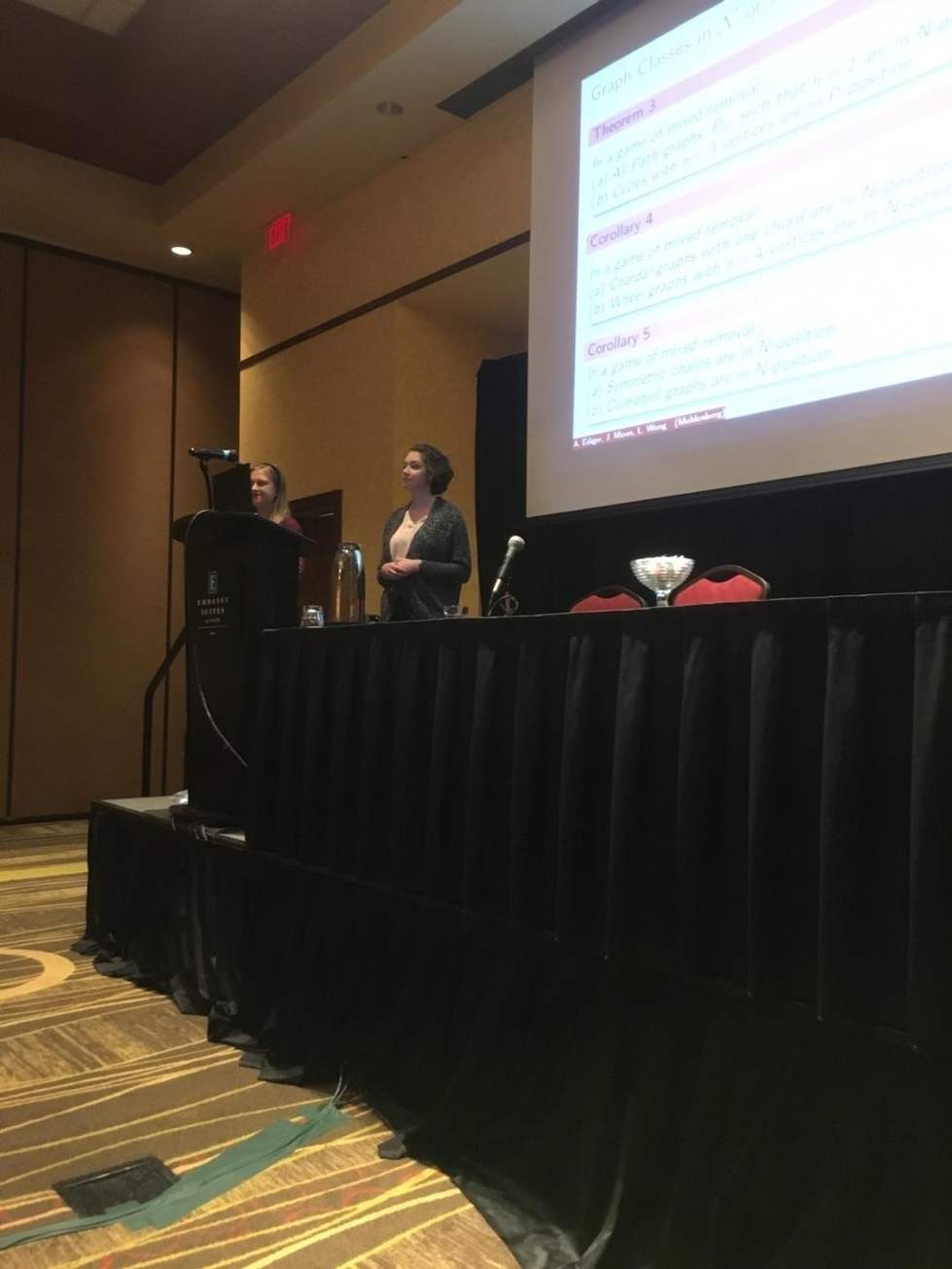 Jennifer presented the research she conducted at Muhlenberg College’s 2016 REU, titled Expansions on “A Game of Edge Removal on Graphs,” with two other members of her REU cohort. According to Jennifer, “It was incredibly inspiring to see women from all around the country present original, interesting, and rigorous mathematical research. The environment was incredibly supportive, both professional and comfortable, and by far the best conference I have attended.” Jennifer will be attending UNL for graduate school in Fall 2017.

For Grace, this was her first experience at a math conference. She thought “it was really empowering, and feeling the larger community of women in mathematics had a big impact on me.”

Attendees of the conference heard from two plenary speakers. The first plenary speaker was Dr. Ami Radunskaya, professor at Pomona College and president of the Association for Women in Mathematics. She spoke on her personal journey from professional cellist to studying chaos theory. The next speaker was Dr. Brooke Shipley, professor at the University of Illinois at Chicago, and she told a clever analogy on the relationship between algebraic topology and her personal experiences.

Additionally, ‘breakout sessions’ (small, intimate group sessions that explored specific topics) were offered. Among the topics at these sessions were graduate school applications and what it’s like to be a woman from a minority group in mathematics. In these settings, attendees had the opportunity to network with women all around (and from outside!) the country.

Overall, those who attended the conference enjoyed learning about different areas of mathematical research and meeting women from different backgrounds united by a common interest: math.


Page last modified April 14, 2017
Report a problem with this page