Char Beckmann and five students visit the Museum of Math 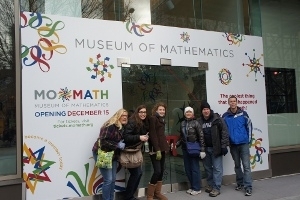 As the culmination of their capstone course in mathematics (MTH 496) during the fall semester 2012, Prof. Char Beckmann and five prospective secondary teachers visited the Museum of Mathematics (MoMath) in New York City. MoMath's goal is to enhance public understanding and perception of mathematics. It contains a broad range of exhibits designed to stimulate inquiry and is geared toward students in 4th through 8th grade, although the GVSU students found plenty to engage them as well!

On their 4-day trip to New York City, Dr. Beckmann and Bill Brown, Bridgette McGuire, Kenny Osbeck, Dani Poll, and Katie Smith visited iconic landmarks such as Central Park, Times Square, the United Nations, Ground Zero, and the New York City Public Library. They also toured Wall Street and heard how former GVSU mathematics department faculty member Dr. Manish Chakrabarti uses applied mathematics to forecast risk. They also used mathematical problem solving as they calculated distances and navigated through their walking tour of New York City. Student Bill Brown particularly enjoyed the mathematical observations he could make about the architecture of buildings. While walking the Hi-Line, an abandoned elevated railroad that has been converted into a linear park, he noted, "the rail line was marked in lengths using pi instead of more normal length measurements...I wish I could have deduced why pi was chosen for these markings."

Their trip culminated with a day at the MoMath. While there, they played with mathematics games and puzzles, used a hyperboloid chair, traveled on a cycloid tricycle with square wheels that rode smoothly over a surface formed by congruent half cones whose vertices were arranged around a central point, and used a laser rectangle and Plexiglas objects to study cross sections of solids. (Here is more information about the exhibits including the cycloid tricycle.)

Dr. Beckmann and the students think that several of the exhibits they visited have potential to be made available to GVSU's mathematics department. For example, the tessellation wall and the SOMA cube puzzles from the museum could be modified to work within the department. Similarly, some of the puzzles they explored at the Enigma Café could be posted on bulletin boards and students could move the pieces to solve them. In addition, Dr. Beckmann and GVSU librarians Deb Morrow and Erin Fisher have discussed the possibility of making several of the puzzles and building tools available in the Innovations Center planned for the new GVSU library. 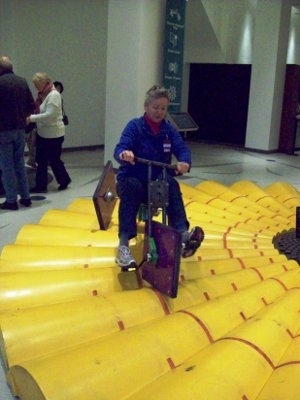 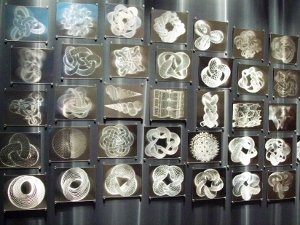 The prospective teachers also saw potential for using some of the activities in the museum in their own classrooms. Kenny Osbeck states, "Perhaps my biggest take-away from the trip was the realization of the importance of puzzles in math...knowing that math is not every student's favorite subject, possessing these small activities in my classroom will engage even the most unmotivated students to do some math... Disguised under the robe of fun, these activities would help stimulate mental problem-solving." Fellow student Bridget McGuire agrees and states, "I think these types of activities can be incorporated into a math scavenger hunt...a variety of logic puzzles could also be incorporated at different "stops" on the hunt."

This trip was made possible through funding generously provided by GVSU's College of Liberal Arts and Sciences, College of Education, Frederick Meijer Honors College, Mathematics Department, and Regional Mathematics and Science Center. As a result of the trip and capstone course, the students and Dr. Beckmann are working to create 15 kits, 5 for each grade band, K-2, 3-5, and 6-8, to be made available through the Regional Mathematics and Science Center for check-out by teachers and librarians. Each kit will contain all the materials needed to engage 30 students in a recreational mathematics activity aligned to the Common Core. These kits will contain the activities written by the students during Math 496 and revised based on their experiences at MoMath.