These questions and more are answered on the new History of Mathematics at Grand Valley website. Created by Ted Sundstrom on a recent sabbatical, this detailed site records the evolution of the mathematics curriculum and the various mathematics programs offered, documenting the changing face of the faculty and mathematics pedagogy. This site is a companion to the more general History of Grand Valley State University site. 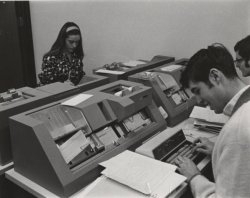 While on a long driving trip a few years ago, Ted had the thought: "We have to tell our story." As a long-time faculty member, having arrived in 1973, Ted felt uniquely qualified to describe the twists and turns in the development of mathematics at Grand Valley. In addition, his eight years as a faculty member in College IV gave him an understanding of mathematics at Grand Valley outside the mathematics department. Working as an historian, however, presented some novel challenges so Ted developed a collaboration with historian Lynn Mapes, whose expertise taught Ted methods to comb through the university archives and interpret his findings.

Though Grand Valley may appear rather traditional to contemporary observers, Ted's website presents a rather different picture of the early days of the university. Instead of a single college, Grand Valley was divided into four, semi-autonomous degree-granting colleges. (In fact, the university was called "Grand Valley State Colleges" in those days.) These colleges each aimed to offer unique experiences for their students. For instance, Thomas Jefferson College was structured to give students the freedom to design their own curricula. College IV, later renamed to Kirkhof College, featured self-paced instruction and the modular design of a liberal arts curriculum.

In spite of his painstaking efforts, Ted feels that there is more that could be added and hopes that there is interest in keeping the site up-to-date. Whether you are interested in recalling the early days of the university or curious to know how innovative pedagogical techniques found their way into standard usage here, you will find plenty on Ted's site to amuse and intrigue you.