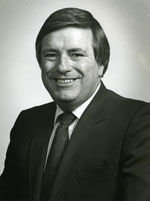 In the 1970s, Don helped develop a computer science major at Grand Valley and was instrumental in having it housed in the Department of Mathematics. The same is true for the statistics program. By hiring statisticians in the 1970s, it was then possible to have the statistics courses at Grand Valley taught in the Department of Mathematics. Computer Science and Statistics are now separate departments.

I have missed having Don in the department these past few years and am deeply saddened by his passing, but I am also grateful for his friendship and the contributions he made to our department.