Few students have accomplished as much at Grand Valley (and after graduation) in the same short time as Nicholas Ceglarek. As an undergraduate, he played football for five years and distinguished himself an Academic All-Conference quarterback, a GVSU Scholar-Athlete of the Year, and even a Rhodes scholar candidate. As a mathematics major, he excelled in the classroom and also completed an undergraduate research project with Professor Fishback. Along with one other student, they studied the Fundamental Theorem of Calculus as it applied to some especially complicated functions. 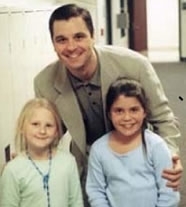 Upon receiving his undergraduate degree, Nick was hired as a high school mathematics teacher by the Rockford Public Schools. He quickly established himself and was soon teaching a wide range of courses, including algebra, geometry, and advanced placement calculus. Nick says the experience was “extraordinary” and that the “best part of teaching is the ability to positively impact the lives of children.”

While teaching in Rockford, Nick continued his education at Grand Valley, earning a master’s degree in educational leadership in 1999. About that time, a position as assistant principal and district assessment coordinator arose, one that took advantage of his expertise in both statistics and assessment. While he would miss some of the one-on-one impact with students in his own classes, Nick saw this as a chance to reach an even greater number of students through “building a school climate of respect, developing programs, and serving students and staff.”

A few years later (at just 29 years of age), he had the good fortune to be offered his current job as the superintendent of Baldwin Community schools, a position that emphasizes assessment and school improvement. While his job has many challenges, Nick says he is especially thankful for the mentoring role his mother plays in his life, for she is also a superintendent (in another district), and provides advice and guidance throughout his life and career.

Nick says that his education has prepared him exceptionally well for his current position. “Grand Valley instilled and fostered a way of thinking, not just establishing a knowledge base.” Moreover, a “mathematics degree helps strengthen an analytical approach to leadership. When a situation occurs, a logical progression of thought follows. The process fostered in many mathematics classes assists me in my daily operations.” He also speaks fondly of how his athletic and academic experiences developed his understanding of teamwork and collaboration with others.

Even amidst the busy times of his current job, Nick has continued his education. He is just 9 dissertation credits shy of earning his doctorate in educational leadership through a joint EMU/GVSU program and should finish the program in 2005. Nick stands as a shining example of one who has taken advantage of so much of what Grand Valley offers and who, consequently, has made a significant impact on the world around him