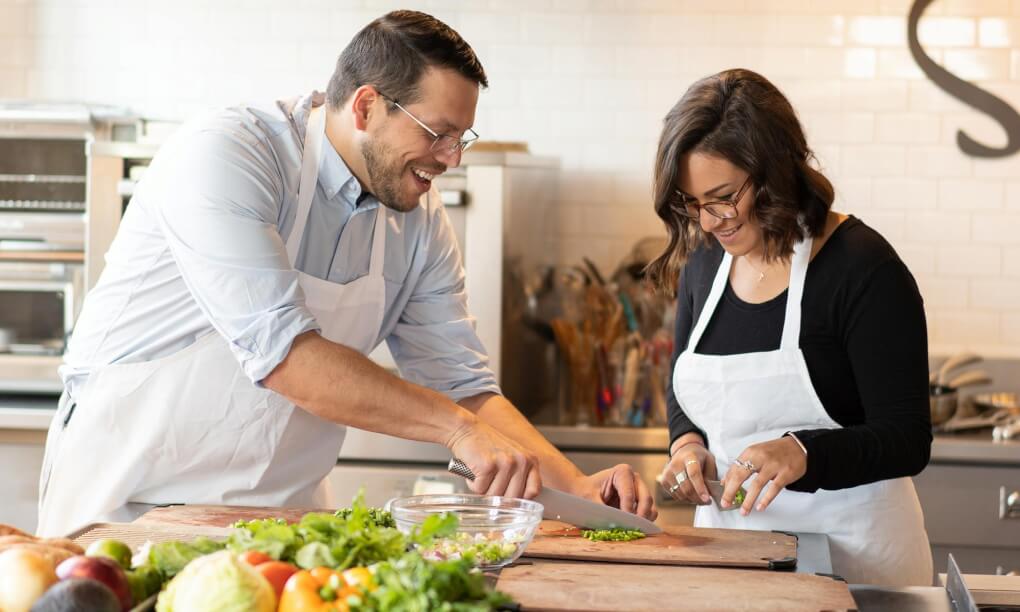 It wasn’t a traditional classroom, but Jesse Bernal was definitely teaching.

Bernal made his recipe for ancho turkey tacos, a recipe that won him the People’s Choice award in June at a healthy cooking contest sponsored by Blue Cross Blue Shield of Michigan and held at the Kroc Center in Grand Rapids. He donated the $500 prize to Grand Valley’s Inclusion and Equity Endowed Scholarship.

He said the fat content in traditional Mexican food sometimes makes it difficult to create healthy dishes, adding his 83-year-old grandmother would be unhappy knowing he used coconut oil instead of lard in the tortillas. Bernal created the recipe for the contest by combining two recipes and drawing from his years as a hobbyist chef and baker. 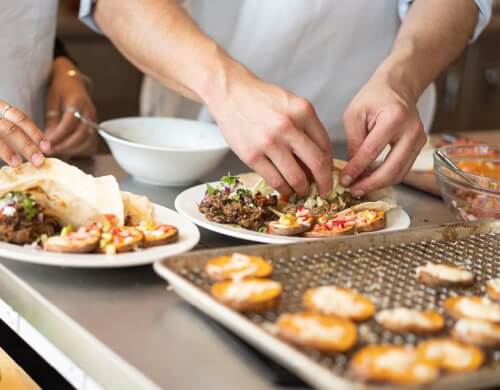 “I was raised by a hard-working, single mother, so my brothers and I often contributed to the household by preparing meals for our extended family.”

“I was raised by a hard-working, single mother, so my brothers and I often contributed to the household by preparing meals for our extended family,” he said. Bernal grew up in south Texas with many family members who were Mexican immigrants.

He takes their influence into the kitchen and said he hasn’t had formal training other than occasionally watching cooking shows on television. “Cooking is a stress reliever, and when there’s time to do it, it’s really fun,” he said.

While living in California and working for Santa Clara University, Bernal auditioned — on a dare — for a TV reality cooking show. To his surprise, he was invited to advance to further rounds but the timing conflicted with the job offer from Grand Valley. “At that time, you had to give the show a nine-month commitment and you couldn’t work during that time. It wasn’t really for home chefs,” he said. 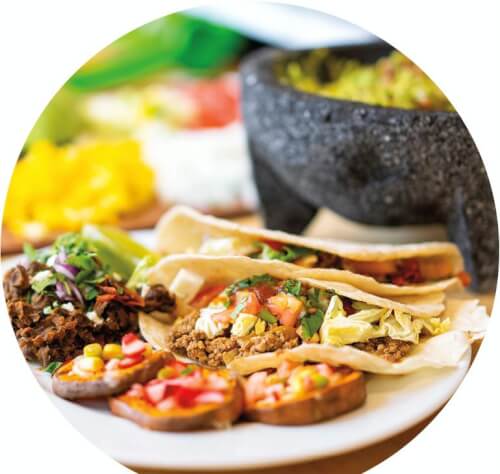 TORTILLAS: (Or buy your favorite) In a large bowl, combine flour and salt. Stir in water and oil. Turn onto a floured surface; knead 10-12 times, adding a little flour or water if needed to achieve a smooth dough. Let rest for 10 minutes. Divide dough into eight portions. On a lightly floured surface, roll each portion into a 7-inch circle. In a large nonstick skillet coated with cooking spray, cook tortillas over medium heat for 1 minute on each side or until lightly browned. Keep warm.

MEXICAN REFRIED BLACK BEANS: Soak the beans in a pot of water overnight. Drain. Heat the olive oil in the pot over medium heat. Add onion, garlic, jalapeño and cumin and cook, stirring occasionally, about 5 minutes. Add oregano and beans, then add enough water to cover (about 9 cups). Increase the heat to medium high and bring to a boil, then reduce the heat to medium low, partially cover and cook, stirring occasionally, until the beans are just tender, about 3 hours. Add 2 teaspoons salt and simmer, uncovered, stirring occasionally, until the liquid is mostly absorbed, about 45 minutes. Season with salt. Let sit 15 minutes before serving; top with queso fresco and cilantro, if desired.

Bernal learned how to make Korean foods like bibimbap, galbi pizza and bulgogi while living with a family during his first year as an undergraduate student at Westmont College in Santa Barbara. He continues to enjoy making Korean dishes although said it usually means going to more than one store to find specific ingredients.

The tortillas Bernal and Dittrich made started with ingredients similar to those that go into his homemade pasta: flour, salt, water and, in this case, coconut oil. The dough, once flattened, browned quickly in cast iron skillets; tortillas were kept in a warmer with paper towels.

Bernal started his recipe the previous day by soaking dried black beans overnight in water. He sometimes makes this dish with shredded turkey, after roasting a turkey breast in a crockpot for two or three hours, but said ground turkey is a quick substitute.

Before browning the turkey, Bernal showed Dittrich how to efficiently chop the onion and bell peppers that would flavor the meat along with Mexican spices and ancho chili paste. “Rolling your knife back and forth on the cutting board, rather than picking it up, helps keep your fingers safe,” he said. He also taught Dittrich how to smash a garlic bulb with the back of a knife and peel it quickly (a Bernal tip: adding a pinch of salt to garlic cloves makes them easier to peel).

A side dish of sweet potato chips roasted in the oven for 20 minutes while the chef and sous chef prepared vegetables and browned turkey. The inch-thick potato chips were then topped with cheese and the pickled vegetable mix of diced radish, jalapeño peppers and green onions tossed with lime juice. Bernal topped the potato slices with mozzarella, which he said is similar to a creamy Mexican cheese like queso Oaxaca.

The tacos were assembled by first adding a layer of crema to a tortilla. Bernal mixed Greek yogurt, lime and cilantro together to provide a lighter alternative to sour cream.

Dittrich said she learned a lot from the cooking lesson. “It reminds me of cooking with my relatives, who were also immigrants from Mexico,” she said. A native of Holland, she earned a bachelor’s degree from Grand Valley in advertising and public relations and is pursuing a master’s of education degree in college student affairs leadership.

Bernal said he usually doesn’t have time during the week to prepare large meals from scratch but he and his partner enjoy cooking from the meal delivery service that periodically arrives at their door. “I feel like we are learning a lot by preparing those meals,” he said.