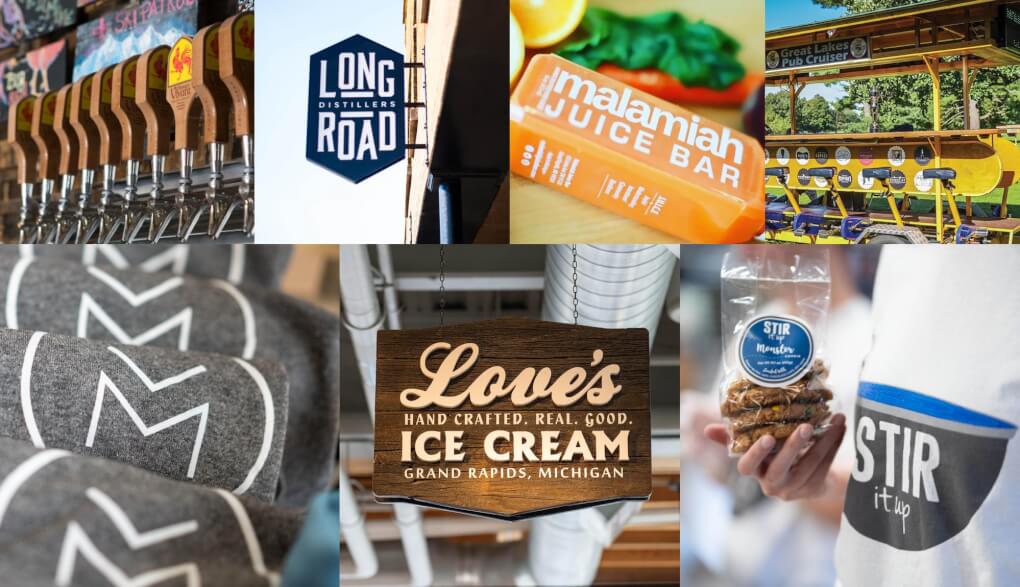 There’s no question about all there is to see, do and experience in Grand Rapids. Tourists and residents alike explore the city for its diverse scenes and activities, from art and food to history and music. It’s a city full of creativity and growth, where new businesses can thrive. The River City has become a destination, a place where visitors would buy a postcard to mail, touting their travels.

Grand Rapids is not only home to Grand Valley’s Pew Grand Rapids and Health campuses, but it boasts many alumni-owned small businesses that offer a (sometimes sweet) glimpse into the city’s culture. 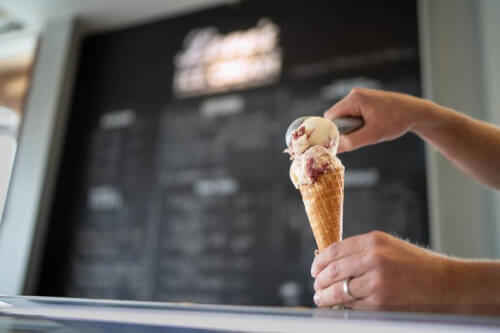 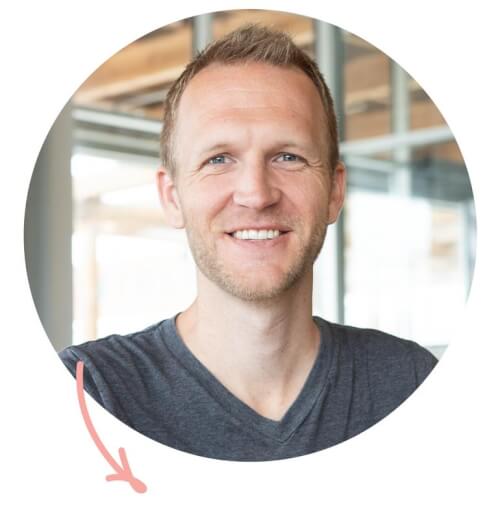 What is Chris McKellar’s favorite ice cream flavor? That’s an easy one.

“Campfire S’mores because it reminds me of summers up north at the cottage,” he said.

That, and because it’s one of the most labor-intensive flavors he and his team make at Love’s Ice Cream, located in the Grand Rapids Downtown Market. A small batch of the marshmallow-meringue, graham-cracker-base and fudge-infused flavor is made twice a year for Memorial Day and Labor Day weekends.

McKellar is founder of the ice cream company. The Grand Rapids native earned a bachelor’s degree in business and marketing from Grand Valley in 2002. He and his 15-employee crew pride themselves on making hand-crafted ice cream and confections from scratch using minimally processed, organic and Michigan-sourced ingredients.

“Grand Valley was a good stepping stone from high school and into the business world,” he said. “I’m the black sheep of my family; my parents and siblings all went to Western. I chose Grand Valley because it was affordable and the downtown campus was so new at that time.”

Shortly before opening Love’s, McKellar returned to school to learn culinary arts at Grand Rapids Community College. The Downtown Market was under development at the time and he learned that the organization’s leasing committee was searching for an ice cream maker.

“I happened to be making ice cream at home all the time, so I thought, ‘Maybe that’s the next step. Everyone loves ice cream and there’s no one in Grand Rapids doing that right now,’” he said.

That was five years ago. Since then, the shop has expanded to a larger space in the market and has begun selling pints of ice cream at specialty grocery stores throughout the state.

McKellar said he gets inspiration for new flavors and ideas from his travels, emerging food trends and ingredients from cultures abroad.

Oh, and if you see a 1961 retro van outfitted as an ice cream truck around town, that’s Chris and his team, taking the shop on the road to food truck events and catering gigs.

“Grand Valley was a good stepping stone from high school and into the business world.” 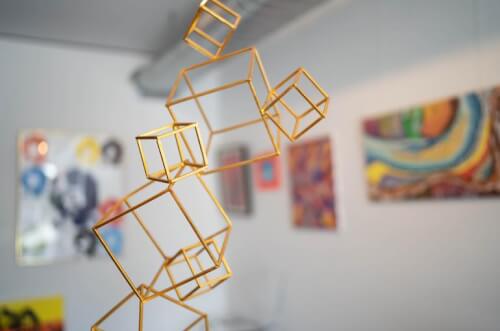 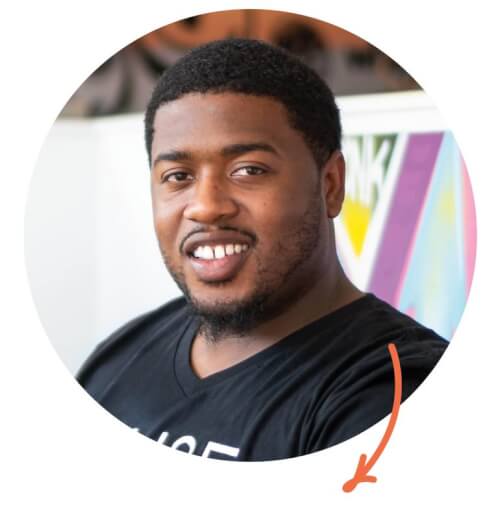 Creativity and collaboration are at the core of Muse GR, an interactive art gallery located off Leonard Street on Grand Rapids’ West Side.

Stephen Smith and his wife, Taylor Smith, opened the colorful, open space in May after an extensive five-month renovation. Muse GR is open to the public to visit, display artwork and host workshops. Many of the pieces on display were created by Grand Rapids-based artists, with a few pieces by Detroit artists.

The idea for the business began when the couple took a nontraditional route to buy a house; they wanted to find a space that would help offset the cost of a traditional mortgage. Stephen said the concept for Muse GR came from their creative interests; Stephen is a photographer and Taylor has a background in writing and video editing.

“We knew we wanted to do something business-related, like a live-work type of space,” said Stephen. “We also wanted our space to be interactive. We recently hosted an artist who displayed her clothing line and people could try on the pieces — it was live art.”

Education is a major part of Muse GR as well as Stephen’s job at Martin Luther King Jr. Leadership Academy, where he provides academic and social support for students. At Muse GR, he hosts photography workshops, and in September, the pair hosted several youth workshops as an ArtPrize education partner and venue.

Stephen earned a master’s degree in educational leadership in 2014. He said he was able to take much of what he learned in class and apply it to his job the next day.

“I had great professors, especially Dr. (Liz) Margulus because she did more than teach,” he said. “She guided me through some critical decisions I had to make on the job.”

“We recently hosted an artist who displayed her clothing line and people could try on the pieces — it was live art.” 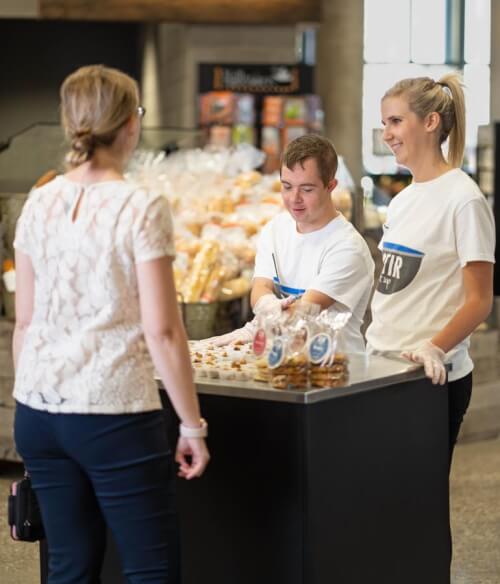 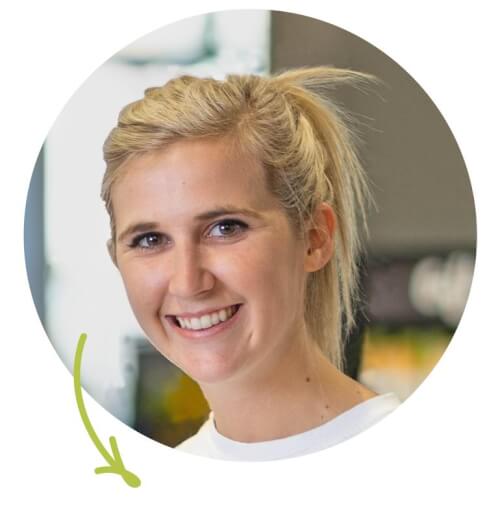 Zoe Bruyn, '17, Stir It Up, Bachelor's degrees in management and marketing

Stirring opportunities for people with disabilities

The idea for a unique bakery came to Zoe Bruyn when she was serving as a leader with the Young Life Capernaum Ministries, an organization for young adults with disabilities.

“I noticed these individuals would struggle to find employment after aging out of school at 26,” said Bruyn, who graduated from Grand Valley in 2017 with bachelor’s degrees in management and marketing.

She began researching employment statistics and found that nearly 70 percent of individuals with intellectual and development disabilities are unemployed.

“However, when you employ them, they are some of the most loyal and dedicated employees,” she said.

Bruyn’s team at Stir It Up bakery includes six employees: two Grand Valley students who are managers, a student from Huntington University who’s completing her occupational therapy residency with the team, and three individuals with disabilities.

“Jesse, Kyle and Kim are involved in every step of the process, from prepping dough to baking to decorating to packaging, as well as interacting with our customers at various events,” she said.

“When you employ people with disabilities, they are some of the most loyal and dedicated employees.”

Since her first year at Grand Valley, Bruyn was involved with Grand Valley’s Richard M. and Helen DeVos Center for Entrepreneurship and Innovation (CEI) in the Seidman College of Business. She participated in multiple business pitch competitions and won prizes ranging from $1,000 to $20,000.

Bruyn hopes to raise enough money to open a bakery in Grand Rapid’s Creston neighborhood, an area she called up-and-coming.

“The most rewarding part about owning a small business is when our team sees our success and gets excited about their jobs,” she said.

The alumni featured in this story are just a few of many alumni who own businesses in Grand Rapids and beyond. 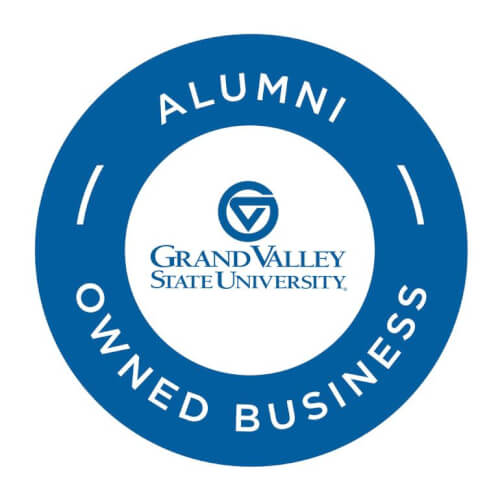 Do you own a business?

Share your story with the Grand Valley Alumni Association by submitting a career update at gvsu.edu/lakerlandings. 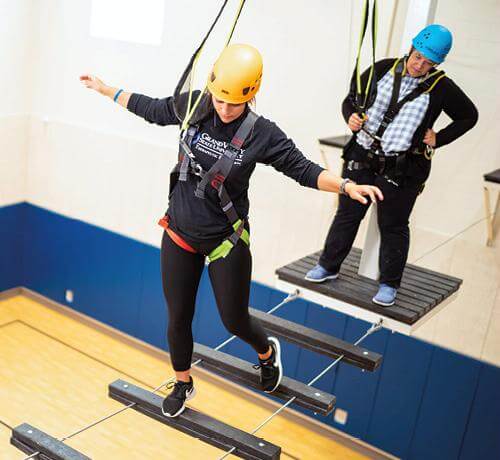 Elena Brownell was shaking a bit as she carefully walked along the suspended ropes course high above the floor of the two-story therapeutic recreation lab in Raleigh J. Finkelstein Hall. 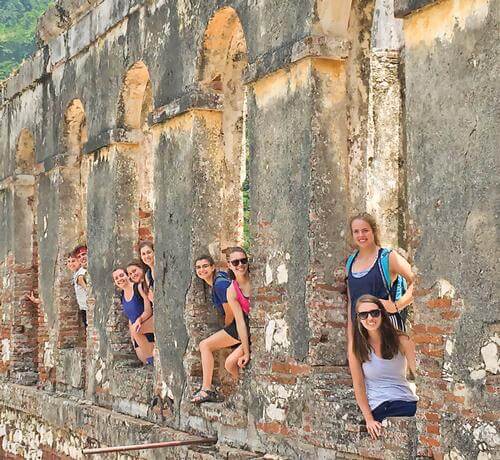 A Haitian proverb that roughly translates to "The tall tree sees far, but the wandering seed sees more," served as the theme for a study abroad trip taken by a group of Lakers to Haiti.