The ravines are a beautiful resource which should be protected, as well as a potential hazard to the surrounding infrastructure of the university if not carefully managed (Figure 1). The steep hillsides and ravines are currently undergoing rapid erosion, down cutting, and widespread slope instability. It is likely that this erosion is due, at least in part, to an increase in stormwater runoff, which is directed to the ravines from impermeable surfaces such as parking lots and walkways.

Dr. John Weber has done previous studies with students which suggest that the down cutting rate over the past 40 years may be as much as an order of magnitude greater than it was prior to the construction of GVSU (John Weber, personal communication).

Dr. Peter Wampler and student summer scholar Patrick Womble are collecting data during the summer of 2006 to better understand the affect GVSU urbanization has had on the ravine system. Specific research questions that we hope to answer include:

Here is a small PDF version of the Summer Scholar poster 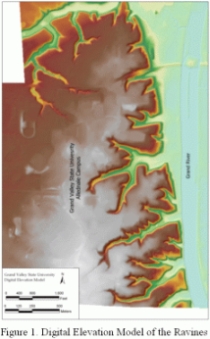 Page last modified April 27, 2017
Report a problem with this page