New Perspectives on the 1904 Flood in Grand Rapids, Michigan

In March of 2004, we retook the classic photographs of the 1904 flood in Grand Rapids.  The purpose of this project is to raise awareness of the impact of a similar flood if it were to happen today.  We wish to thank Evelyn Sawyer of Web Project for allowing us to use her images. 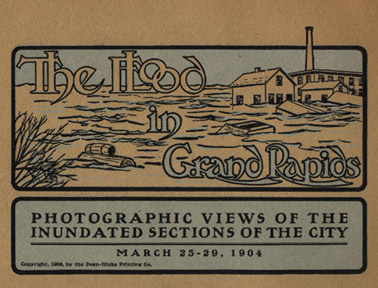 "The accompanying photographic views illustrate the greatest and most destructive flood ever experienced in Grand Rapids -- the inundated territory being larger in extent, perhaps, than that ever under water at one time in any city similarly situated. The Grand River began to overflow its banks on Thursday night, March 24th, steadily rising until 6 o'clock on the morning of Monday, the 28th, when it registered 19.6 feet, more than two feet above the highest previous mark.

More than one-half of the entire populated portion of the city lying on the west side of the river was completely underwater, over twenty-five hundred houses, affecting fourteen thousand persons, being completely surrounded.

Most fortunately and, indeed, miraculously, no casualties occurred, but much suffering from cold and hunger and exposure resulted, alleviated in a measure by the prompt measures for relief.

The monetary loss, direct and contingent, is conservatively estimated at one million eight hundred thousand dollars. Eight thousand men were temporarily thrown out of work, fifty factories being forced to shut down.

On the east side of the river the flood effects were limited to inundating numerous factories, and the flooding of two to three hundred business basements.

All of the bridges spanning the river within the city limits, eight in number, withstood the flood.

The net proceeds from the sales of this souvenir of the flood go to the relief fund."

Web Pages on the 1904 Flood Centennial

Views at the Corner of Pearl and Front Streets

Fourth Street, Between Turner and Broadway

Panoramic View - South from Corner of Allen and Winter Streets

At the Gas Plant


Page last modified June 20, 2017
Report a problem with this page