Monthly newsletter of the TT faculty of the college 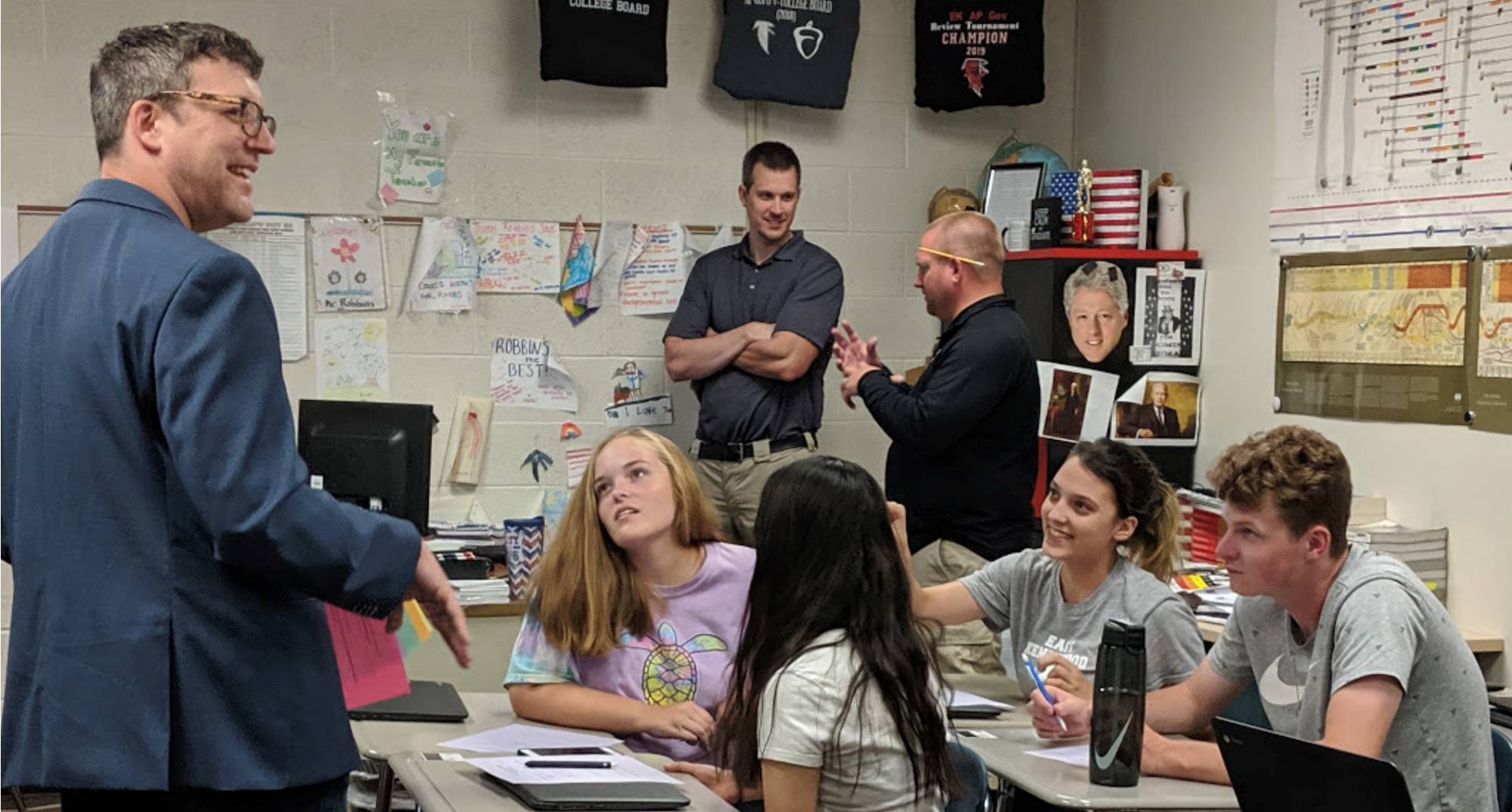 Democracy Inside Out—Grappling with Hard and Relevant Questions

Classics faculty answered the call when Democracy 101 was looking for appropriate programming.  In its first year, Professors Diane Rayor and Quinn Griffin helped to run the voter registration effort.  Last year, Chuck Pazdernik and David Crane developed a session to make the most of the ancient Greeks’ status as democracy’s designers and early adopters.  Their workshop Democracy 101: Democracy in Ancient Athens was soon surprising GVSU students and has even been a successful outreach effort to a local high school.

Students admit in their session evaluations that they imagined that they would receive a lecture on the birth of democracy, but David and Chuck describe their goals rather differently.

“We wanted to defamiliarize democracy because Athenian democracy is different from our own.  They appointed by lot versus having elections as we do.  We wanted students to think and discuss those choices.”  David queries, “Does ‘by lot’ mean more transparency at the front end?”[i]

Session attendees are randomly placed in small groups and invited to discuss one of six questions presented on a handout.

A. Is it more democratic to elect public officials or to select them randomly from a pool of qualified candidates?

B. Would politics be improved if candidates had to submit to formal scrutiny and approval before they were allowed to hold public office?

C. Would public life be better if democratic majorities could exclude polarizing figures from participating in politics?

D. Would legislators make better laws if legislative districts were drawn to break up regional interests rather than to concentrate them?

E. Would justice be better served if verdicts in civil and criminal trials were decided by juries consisting of hundreds of citizens, randomly selected, casting their votes without formal deliberation?

F. How can democratic decision-making be reconciled with the fact that some people

These compelling explorations get to the heart of many of the differences between ancient and contemporary democracies, but also proclaim the degree to which these questions raise perennial challenges for any democracy.  The findings of the groups are shared in a plenary discussion.

Depending on the time allowed for the session, some images can be shown to display the material culture involved in Athenian democratic practices, such as the ostraka (pottery shards) involved in votes to "ostracize" polarizing figures (a practice not undertaken lightly).  This presentation and even the number of questions can be adjusted to fit the available time.

David notes, “Sometimes dispassionate discussion of issues is hard to cultivate, and people can feel politics is too personal for them to talk.  Our discussion of Athenian democracy has the benefit of being ‘not now’.”

GVSU students have responded enthusiastically and remarked in evaluations on the startling degree of their own engagement.  They talk about becoming more open-minded, use words such as “fascinating” and “insightful”, and they even draw connections to work they are doing in their courses and undertake to talk with friends about what they have learned.

Our students will have their next opportunity to experience this when the session is held on November 13 .  And some local high school students had the chance recently.

When Chuck and David were approached by Justin Robbins, coach at East Kentwood High School of the We the People team, they realized this was a session they could take into the community.  “Classics faculty make the investment of our time to get ourselves out there,” Chuck explains.  “We want to be visible in multiple contexts across campus and in the community.  Classics is at the heart, at the starting point in many stories of our relationship to the past, but that relationship is much less direct and familiar than we often realize.”

David and Chuck see that because Athenians had “different defaults” the questions posed in the Democracy 101 discussions cut against the grain.  They are posed in the form, ‘what is more democratic?’.  This gets students thinking about which values are being endorsed and how to place values in dialogue with one another.  This framing both makes it easier to discuss the role of money and influence in ancient and modern politics and also gets students to think about who is qualified to represent and who to vote.  What is ‘qualified’?  Who decides?

Another Classics Department colleague, Charles Ham, team teaches the Worlds of Greece and Rome sequence in Honors with Chuck; they have made use of a version of the session there.  The adaptability and scalability of Democracy in Ancient Athens has worked in a 50-minute section of CLA 121 Greek Civilization as well as in a format that David and Chuck consider the sweet spot—two hours and 48 participants.

They find that it is refreshing to think about classical political theory (which is often taught via philosophers or historians who had trenchant criticism of democracy or via courtroom speeches that provide positive arguments but tied to a particular context) in this highly engaged way.   They can get at questions of how democracy is made to work year after year and how we can reconstruct the safeguards and principles and timeless structural concerns about money and electioneering.  Students come to grasp the enormous human capital required to maintain these critical structures from the village and regional levels up to the central organs of government.  They come to appreciate the investment by hundreds of highly motivated citizens in making it work.  They get to see that the Athenians found it worthwhile to do it.

Chuck explains that the Classics Department sees itself as a resource for outreach and a reservoir of expertise.  The Department’s founding in the year 2000 was an expression of how integral to liberal arts institutions these fundamental inquiries are.  “I hope we demonstrate how you add value in lots of ways,” Chuck adds.  “Some people have passionate interest in Greeks and Romans, some even for disturbing reasons, but lack access to the languages and the sources.  The grand narrative out there is often oversimplified.  White nationalists, for instance, construct it for their own purposes.  But there is no single drummer to march to.  Classicists come at it from the inside out.”

The many Grand Valley students who have been surprised by Democracy in Ancient Athens, along with the high school students of East Kentwood’s We the People team, are very glad they do.

[i] A TED Talk by Brett Hennig makes a case for sortition in modern democracies.  David provides some additional context: “the Athenian process called dokimasia (pl. dokimasiai) - these were investigations held into whether a man was qualified to hold office (or be a citizen), generally held in advance of assuming office (or citizenship). That investigation is what I was characterizing as greater transparency "at the front end," in a system where offices were appointed by lot.  (Tangent: some ancient philosophy types have made the argument, with reference to Socrates' acceptance of the verdict against him in Crito, that processes such as dokimasiai constituted such heightened levels of scrutiny/transparency that grounds for a citizen's implicit ‘contract’ with the state are much stronger in ancient Athens than modern America.)”

FROM THE DEAN’S DESK

Maybe it is the title of the Shakespeare Festival’s mainstage production of A Midsummer Night’s Dream or the weather ten degrees warmer than our September averages, but it may take more than omnipresent pumpkin spice to convince ourselves that we have entered fall and must brace for the very full program that is always our October.

Just a partial list of compelling events in the first couple weeks of the month:

We are still in the critical first six weeks of our newest student’s GVSU career, so pointing out the rich offerings and letting them know about some you will be attending can go a long way toward helping them connect to the exciting extracurricular and co-curricular aspects of university life that will help them find their individual place here.

I met with our alumni board last weekend.  They are inspiring and committed to our future.  They articulate what their time at Grand Valley did for them so very well (one of the reasons I also love our Distinguished Alumni-in-Residence events, too), but even for our superstar alumni, in can take a while to come to these realizations.  For our students, a little help from the faculty in the various disciplines to talk about what specific skills and talents are being nurtured will go a long way when they face family and friends who may or may not understand the value of a liberal education or meet interviewers who may not appreciate what the Harvard Business Review calls, “a false dichotomy between a liberal arts education and preparation for work and life.”  That is why I value your work to help students become aware of their own growth and become excellent ambassadors for their own educations.  We shouldn’t wait until the capstone course, because, as one of my office colleagues puts it, there will be some cynical Uncle Bobs at the Thanksgiving tables of our first-year students, too.  May the Uncle Bobs be pleasantly surprised this year.

Thank you for all you are doing to make waves, bring us a vibrant array of art offerings and science events, and fuel our democracy, all while meeting the many October deadlines and introducing your disciplines to new students.  This month promises a rich harvest.


Page last modified July 1, 2022
Report a problem with this page