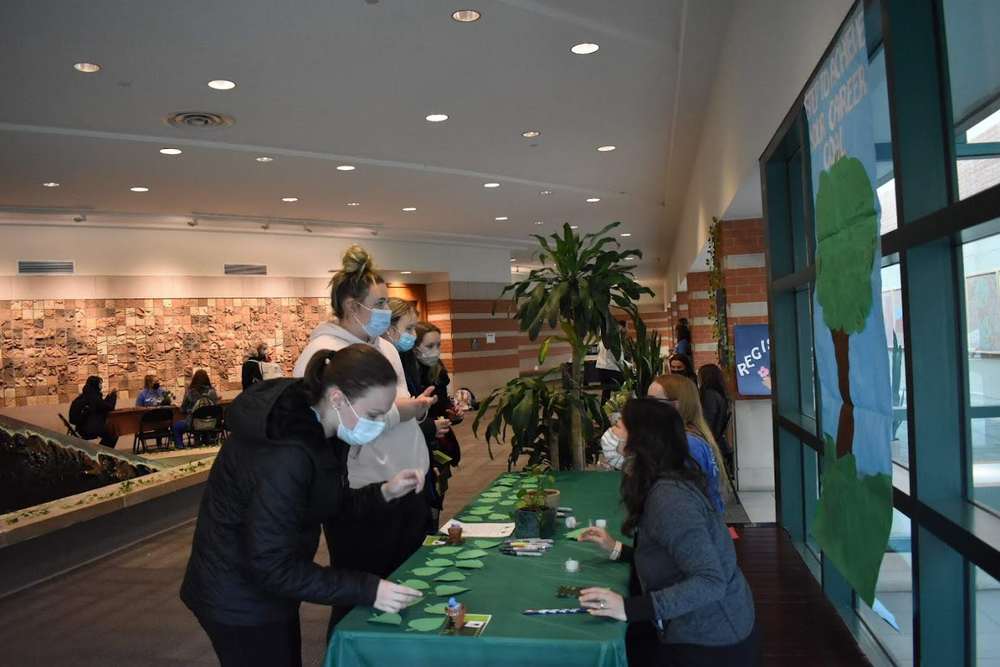 For more than a decade, the Grand Valley State University Career Center has worked alongside the Hospitality & Tourism Management (HTM) program to give students real-world experience with event planning and coordination. Once per year, students from the HTM 240 class plan the Career Center’s annual Open House event. The Open House serves as both a way for HTM students to learn the event planning process and for the Career Center to spread the word about their services.

The partnership between the Career Center and the HTM department began over ten years ago when HTM students planned events like the “Dress for Success” fashion show. While those events were popular and overall successful learning experiences for students, Career Center staff wondered how they could further connect with the student body and get HTM students involved in that process.

“We had heard so many seniors say they wish they’d known about the Career Center,” said Associate Director Lisa Knapp. “So we're doing all this marketing stuff, we're hanging signs, we're at events, we're so visible and they still don't know about us. And so we started thinking, what makes somebody know about us? It's having a good experience.”

Although many students speak highly of their experiences after visiting the Career Center, it is common for students who haven’t visited to imagine it as a totally serious, super professional office. To push back against that perception, the new event needed to be focused on fun instead of typical business and career-oriented topics.

“We've always been in the mindset that if we could just get students around us, they probably would want to come back because we're not scary,” Knapp said. “We’re really helpful people that could connect them to some of the opportunities that they need.”

So far, examples of Open House themes have included many crazy elements, all of which are thought up by students. The first event was centered around road trips, complete with trademark gas station commodities like hot dog rollers. Other events have featured activities like a giant game of Clue, real-life Angry Birds, tailgating, casinos, and drive-in movies.

“We got connected with the class and the idea was that the class would be so much better at pulling in students,” Knapp said. “We could have a Career Center Open House, but it wouldn’t just be a bunch of people that haven't been students in a while planning an event. That wouldn’t be fun for students, and it just made sense to do it with Gail Zemmol.”

Affiliate Professor Gail Zemmol teaches several classes in the HTM department, including HTM 240. To ensure Zemmol can feel confident that the students are ready to hold the event without additional assistance from her, her classes spend a substantial amount of time learning how to be as prepared as possible.

“The Open House is so good because I want the students to put theory into practice, but I want them to do it and I don't want to control it,” said Zemmol. “And the Career Center will allow students to make minor mistakes, and so that's one of the reasons why I think it's a great partnership.”

Being able to make mistakes is the main reason why the Open House is such an important event to the students that plan it. When things go wrong at events (and according to Knapp and Zemmol, they always do), those are the times when planners learn the most. Learning those lessons now instead of after graduation is very valuable.

“I remember one time something didn't go exactly as planned and it was handled a little bit, well, not great,” Knapp said. “Gail gave me space to go back into the classroom and say, you know, if I’d been paying them I would have been really disappointed in the way that that was handled, but not that it happened. Things are gonna happen. You're with people and you have things moving, but it could have been handled differently and I think that that's a safe place to learn.”

Working with the Career Center for the Open House event also has advantages students might not notice. During the event planning process, students have to research the client they are working with. When that client happens to be the Career Center, students end up learning all about the services, advisors, and useful programs offered to them.


Page last modified February 9, 2022
Report a problem with this page