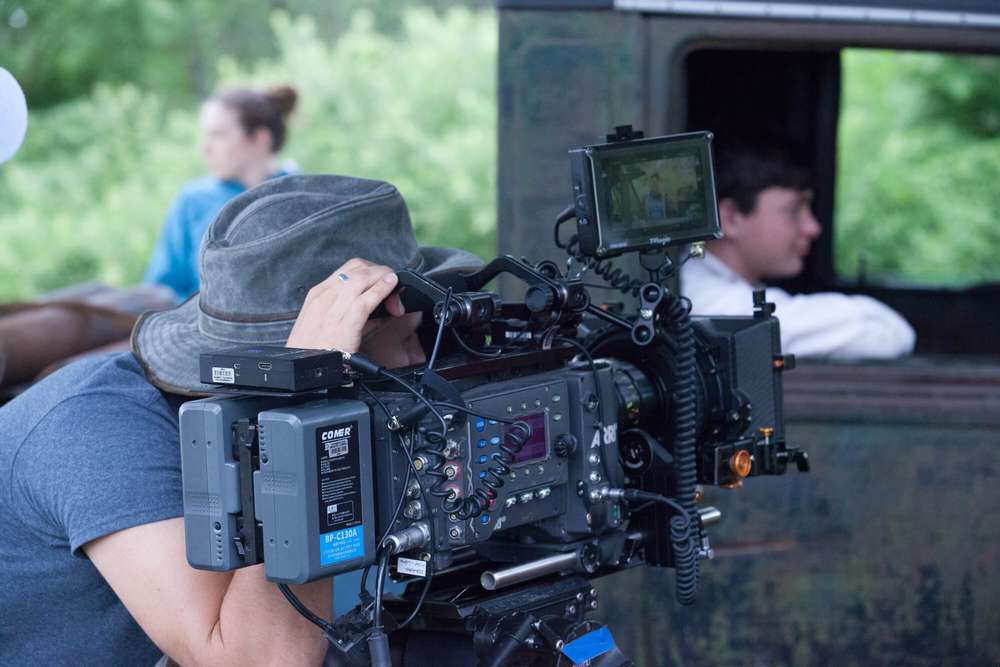 Wes is a shy, sensitive 12-year-old boy growing up poor during the Great Depression. Plagued by bullies, Wes’ response to violence has always been to run away. But, when his family’s well-being is at stake, Wes can’t run anymore.

This is the plot of the 24th annual Summer Film Project, “Down by the River,” which wrapped production on July 22 after filming at various locations around West Michigan.

Since 1994, the Summer Film Project has provided students with the opportunity to work alongside industry professionals while producing films of varying lengths, from shorts to full-length features and even a web series.

This year’s crew consisted of a combination of Grand Valley students, faculty members and professionals, along with nine actors from Los Angeles, Detroit, Lansing, Chicago and West Michigan.

“Down by the River” was written by Aaron Schuelke, visiting professor of film and video production, who served as the director for this year’s film project.

This was the first Summer Film Project experience for Chad Hilliard, a senior majoring in film and video production, who served as both line producer and unit production manager on the set, but he said he wishes he had been a part of the project in years past.

“This was a beneficial experience for me because due to the size, budget and logistics of our film, we needed a lot more documentation and formal agreements for all aspects of the production,” said Hilliard. “This gave me a much better idea of how films are produced in the professional industry. I truly recommend the Summer Film Project to any students who would like to experience a much larger, professional set.”

Alexander Berdy, a senior majoring in film and video production, served as this year’s production designer. He said the stresses his job helped him thrive on set.

“Everything that is seen on screen is part of my job, so keeping track of every prop and detail is hard to do, but luckily I had an amazing team supporting me,” said Berdy. “Even though being on set is high stress, to me that stress was good and functional and the feeling of rising to the challenge is what I enjoyed most. Plus, seeing the director’s face when everything came together was a great payoff.”

“An audience will forgive small ‘mistakes’ in the picture, like a lens flare or an ill-placed shadow, but if the sound is distorted or too quiet or out of sync for a tenth of a second, the audience will lose its suspension of disbelief,” said McCargar. “That’s why so much time and expertise is devoted to recording sound realistically and often beyond realism.”

McCargar emphasized that he believes students working on the film each year walk away with an understanding of three critical traits any film industry professional needs to have: discipline, collaboration and perseverance.

“The creative process is fraught with mostly legitimate and necessarily competing agendas. The only way that all of this can be synthesized is ‘pure’ organization,” McCargar explained. “I’ve come away from eight of these experiences over the years with a real understanding of the fact that, when given the chance and the inspiration, the typical Summer Film student walks away having grown in their understanding and maturity far beyond the time spent doing the work.”

“I love their energy and hunger to learn. They are the most hard-working group I have ever worked with,” she said. “Grand Valley is doing something amazing with the Summer Film that no one else is doing. I am glad to have been part of its history and I cannot wait to be a part of it in the future.”

Students will now use the fall semester to edit the film, with a premiere planned for spring 2019.

The contents of this piece were created by the GVSU University Communications team. https://www.gvsu.edu/gvnext/article-index.htm?articleId=3330938F-08FC-462D-B7271A65E8C34FF4


Page last modified July 30, 2018
Report a problem with this page