Big news rocked the trading world recently with the announcement of the monthly goods and services trading deficit dropping a staggering 19.1% for the United States.

Though April was a great month, in the big picture the United States is still feeling the effects of the Covid-19 pandemic. Between April 2021 and April 2022, the goods and services deficit increased by 41.1% totaling $107.9 billion.  This is essentially due to exports increasing by 18.8%, coming in at $151.3 billion, and imports simultaneously increasing by 24.3%, totaling $259.2 billion within this timeframe.

On a more positive note, the U.S. three-month trade deficit average is starting to look a lot more promising. Between February 2022 and April 2022, the average goods and services deficit fell by $0.3 billion, down to a total of $94.3 billion. During this time period, U.S. exports increased by $8.3 billion for a total of $242.2 billion, and imports increased by a marginal $8.0 billion totaling $337.4 billion.

In April 2022, the U.S. export of goods increased by a substantial $6.1 billion to a total of $176.1 billion. The largest portions of this increase came from industrial supplies as well as food and animal feed, accounting for about $4.5 billion combined. Another large portion of the increase was due to the export of capital goods– namely civilian aircraft.

During the same month, the U.S. export of goods also increased by roughly $2.4 billion, totaling at $76.5 billion. The main categories that caused this increase were travel and transport which increased by $1.5 and $0.3 billion respectively.

Some of the largest contributors to this decrease were consumer goods, industrial supplies, and capital goods which all decreased by $6.3, $5.4, and $2.6 billion respectively. However, U.S. imports of automotive vehicles rose by roughly $1.4 billion.

Alternatively, the import of services during the same month increased by $0.9 billion compared to the month prior, capping out at $55.9 billion. The largest contributors to this increase were travel, with a $0.6 billion dollar increase, and other business services at $0.2 billion.

For the full report, you can find the U.S. Census post here.

Natalie Bremmer is a Student Assistant at   GVSU’s Van Andel Global Trade Center . She is a Junior currently pursuing undergraduate degrees in Finance and Human Resource Management at Grand Valley State University. She enjoys lifting weights, getting lost in a good video game, spending time with friends, and going on long hikes.


Permanent link for What is the Harmonized System and Why is it Important? on April 8, 2022

What is the Harmonized System (HS) and the HS Classification?

The Harmonized System (HS) is something every importing and export company will need to understand so proper HS classifications can be assigned to their products. Companies need to take great care in assigning HS classification and understand the compliance risks associated with their HS classification decisions.  Exporters and importers alike have a legal responsibility to properly claim and classify goods/products.

The Harmonized System (HS) is a very structured classification system made up of sections, chapters, notes, headings, and subheadings.

The Harmonized System (HS) is broken down into 22 sections which act as groupings of similar chapters.

There are 97 chapters of products that are organized from least manufactured to more manufactured and logically group classifications by make or by use. The first two digits of each HS classification are the chapter number. Within each chapter, the Harmonized System (HS) provides a four-digit heading with the primary legal definition of what is to be included in that heading.  Those headings are further broken down into six-digit subheadings. The heading and subheading legal definitions are universal and all countries agree to use the same legal definitions.

Why is HS Classification Important for your Business?

First of all, for importers, the HTS classification determines the duty rates and the duties paid at the time of import so it has immediate revenue implications. Non-compliance can result in fines, penalties, and the back payment of additional duties owed.

Paying duties is a non-negotiable, so proper classification can reduce your compliance risk in the short and long run. The result will never be good when using the wrong classification. If your misclassification caused you to overpay in duties, you won’t receive a refund. If you are underpaid in duties, you are required to pay the difference, and customs will decide if you will need to pay interest, and whether or not fines and penalties will be imposed.

For exporting, HS classification is used in:

For importing, HS classification is used in:

All in all, use the HS classification to your advantage. Generate proper classifications and importing and exporting will be smooth sailing.

Jenna Hoover is working as a student assistant for GVSU’s Van Andel Global Trade Center. She is a junior at GVSU currently studying Finance and Supply Chain Management within the Seidman College of Business. You can find her visiting local coffee shops as she studies for classes or checks in on her Roth IRA. In her free time, she enjoys walking her dog, Gertrude, and hanging out with friends along the beautiful beaches of West Michigan. 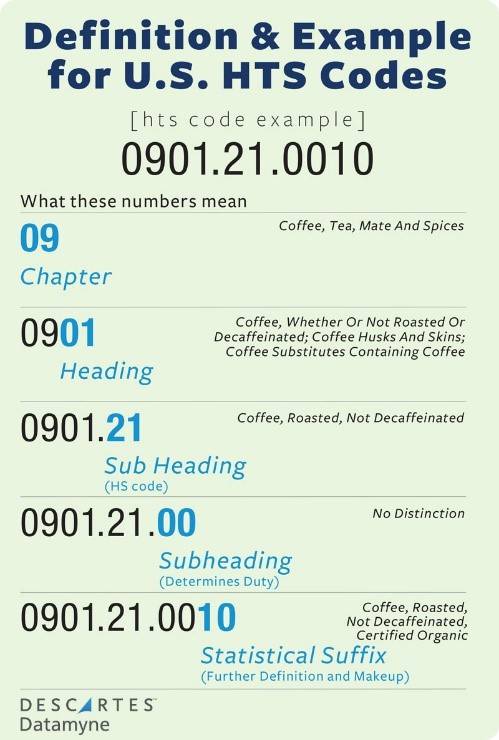 Categories: Export Harmonized Tariff Classification Import
Posted on Permanent link for What is the Harmonized System and Why is it Important? on April 8, 2022.


Permanent link for Harmonized System Updates Your Company Needs to Know on October 27, 2021

The 7th edition of the Harmonized System (HS) nomenclature will enter into force on January 1, 2022.

Why is this important to your business?

The Harmonized System (HS) nomenclature allows for goods to uniformly be imported and exported to/from countries around the globe, 211 economies participate in this system. The Harmonized System allows for customs tariffs international trade statistics to be tracked and reported as goods flow throughout the global supply chain.

The 7th edition of the HS will include 351 amendments to the current system according to the World Customs Organization.

Some of the major changes include classifications that deal with advancing technology, health & safety equipment, and society protections.

Technological advances are occurring daily. Thus, current heading classifications and provisions are not able to properly track new technology that is being created and traded around the world. Updated 2022 HS provisions and classifications will include e-waste, tobacco products, drones, smartphones, and other multifunctional devices.

Recent years have highlighted the need for a quicker and more streamlined way to deploy tools that help diagnose and treat infectious diseases. Classification for these tools has been simplified and provisions have been put into place in the 7th edition for supporting medical research occurring on a global scale.

The World Customs Organization has increased its efforts to combat world terrorism. Subheadings within the HS have been created for dual-use goods that could potentially be converted to an unauthorized use product such as an explosive device.

A number of goods controlled by global Conventions such as chemicals controlled under the Chemical Weapons Convention and the Rotterdam Convention to name a few, have also been updated and reflect clarifications of verbiage to ease the process in classifying products correctly.

Van Andel Global Trade Center recommends companies review the United States HS for 2022 and be ready for any changes that may be implemented on January 1, 2022, that could impact the products your business buys and sells globally. Communicate 2022 changes to suppliers, export customers, dealers/distributors, customs brokers, and international freight forwarders. In some cases, it may be beneficial to obtain binding rulings from Customs to ensure there are no issues/delays moving goods around the world.

The official announcement from the World Customs Organization of amendments effective January 1, 2022, can be found here.


Page last modified June 15, 2022
Report a problem with this page