Permanent link for The Michigander's Guide to the Lunar New Year 2022 on February 1, 2022

Whether you are still in holiday mode or you are just bored with the dull winter sky, cheer up! We have some good news – the Lunar New Year, also known as the Chinese New Year (CNY) is here! This month-long fiesta will give you a legitimate reason to get back into holiday celebration mode and will help light up dreary the February days. Like many ancient festivals around the globe, Lunar New Year, also known as Spring Festival, follows a different timetable: the Lunar Calendar. That being said, Spring Festival begins January 31st, with New Year’s Day falling on February 1st and the festivities continuing until the 15th day of the first Lunar month (aka February 15th ).

We know it’s a busy time, but we didn’t want you to miss out on this exciting holiday that millions of people around the world will be observing, Chinese New Year! So here are some important details to help you celebrate Chinese New Year like a pro.

It is the Year of…

The very first thing to know is that we are celebrating the Year of the Tiger. Each lunar year is assigned one of the twelve Chinese zodiac signs – rat, ox, tiger, rabbit, dragon, snake, horse, goat, monkey, rooster, dog, and pig – which rotate in a twelve-year recurring cycle. (Sorry cat-lovers, there is no Year of the Cat.)

Unfortunately, it is believed that people will have bad luck during their zodiac year, so for all the people who are turning 12, 24, 36 etc. in the year beginning on February 1st, you may want to wear something red all year round. Red is a color largely perceived as a sign of blessing and justice in Chinese culture, so adding something red to your wardrobe, such as a bracelet, shirt, etc., might help to ward off bad luck.

China is enamored with the color red. It symbolizes vitality, blessings, justice, and festivity. During CNY, you will see people using red almost everywhere you look. Houses, office buildings, and streets are covered with red lanterns and lights, and many people wear red clothes for good luck. The color is indispensable to the Spring Festival holiday.

After throwing out all your bad luck by thoroughly cleaning up your house, the first step to demonstrate that you are ready to welcome a fresh new year is to decorate your door with an upside-down Chinese character “Fu” (). “Fu” means fortune, luck, prosperity, and any other favorable words you can think of. Why put the Chinese character upside-down? Well, here is a classic example of a Chinese pun. The word for “upside-down” (dào, ) is a homophone for the word for “to arrive” (dào, 0). By hanging the character upside-down, you are suggesting your fortune is on its way.

Perhaps one of the most gratifying ingredients of the CNY festivities is the distribution of the red envelopes with “lucky money” wrapped in them. The origin of the tradition can be traced back to BC days when people believed children were weak and a monster named Sui would eat children at the end of the year. Parents would wrap coins in red paper to scare (some say bribe) the monster in hopes of a safe and peaceful year for their children. That is why the real name of “lucky money” is “ya sui qian” which literally means “the money that suppresses Sui”. The amount of lucky money given widely varies and depends on the region, but several hundred Yuan is generally expected.

Just as we might instinctively put “It’s the most wonderful time of the year…” on the radio after the first snowfall in Michigan, the Chinese New Year unofficially begins when malls start to loop the classic holiday songs that everyone claims to be tired of, yet still sing along with. Jamming some CNY classics equivalent to Rudolph the Red-Nosed Reindeer at your party would definitely bring the festivity up a notch. Some of the most well-known songs are: Gong Xi Fa Chai (directly translates to Wish You Get Wealth), New Year Celebration and Congrats, Congrats. Additionally, there are several collections of CNY jingles online, even if you do not know the lyrics, it is the celebratory spirit that counts.

In 1983, China Central Television launched the first Spring Festival Gala, a show that airs every Chinese New Year’s Eve featuring musical, dance, and drama performances. Since then, it has become a modern CNY tradition to watch the Gala with family while eating a reunion dinner and, more than likely, playing the game Mahjong.

Mahjong is to the Chinese what Euchre is to many Michiganders. I would argue though, the Chinese love for the game runs deeper. The fun part of this tile-based game is that there is no pressure to win it. In fact, Chinese people can barely ace it themselves as each province or even each town has its own rules. So if your Chinese friends spend half an hour debating on the rules before starting the game, don’t worry about it.

Of course, it would not be much of a New Year’s festival without firecrackers and fireworks. Although in very recent years, local governments of major cities have limited the usage of fireworks for safety, pollution, and noise reasons, many people will still stay up until midnight to watch the fireworks displays.

Needless to say, we now live in a very different time to the original Chinese New Year festivals. As many older folks might lament the changing of bygone conventions, the younger Chinese generation has offered their own interpretations of the holiday and many of these are now new traditions.

Customarily, the elders of a family give the red envelopes of lucky money to the children. Today however, there is no limit to whom you can give red envelopes to including friends, coworkers, or anyone you care about. The rise of Jack Ma’s Alibaba Group has saved a lot of work for this gift-giving process, as apps such as WeChat and AliPay allow people to send “red envelopes” instantly (and in a more environmentally responsible way). An individual can digitally send several Yuan to another person as a gesture to spread good cheer, or he/she could put a red envelope in a group chat for people to share. This ritual has become more and more popular for business occasions as well.

Reuniting with family members back home used to be the most important way to spend the New Year, but today a stronger economy and rising living standards have extended the option of where this celebration takes place. Instead of undergoing the busiest travel rush of the year, many opt to travel overseas to Japan, Korea, Southern Asia, and even Europe during the New Year period. In fact, the Spring Festival has become the most popular time for the Chinese to take family vacations.

The 15th day of the first Lunar month (February 15) marks the official end of the holiday; you will probably be a CNY expert by then! As the old saying goes, ‘well begun is half done'. So go ahead and dress in red, hang your “Fu” on the door, spread the lucky money cheer, and have a great New Year!

Ruixuan Ran graduated from Grand Valley State University in 2018. She was a Student Assistant at Van Andel Global Trade Center. She grew up in China, and during her time at GVSU she double-majored in accounting and international business with a minor in French.

Posted on Permanent link for The Michigander's Guide to the Lunar New Year 2022 on February 1, 2022 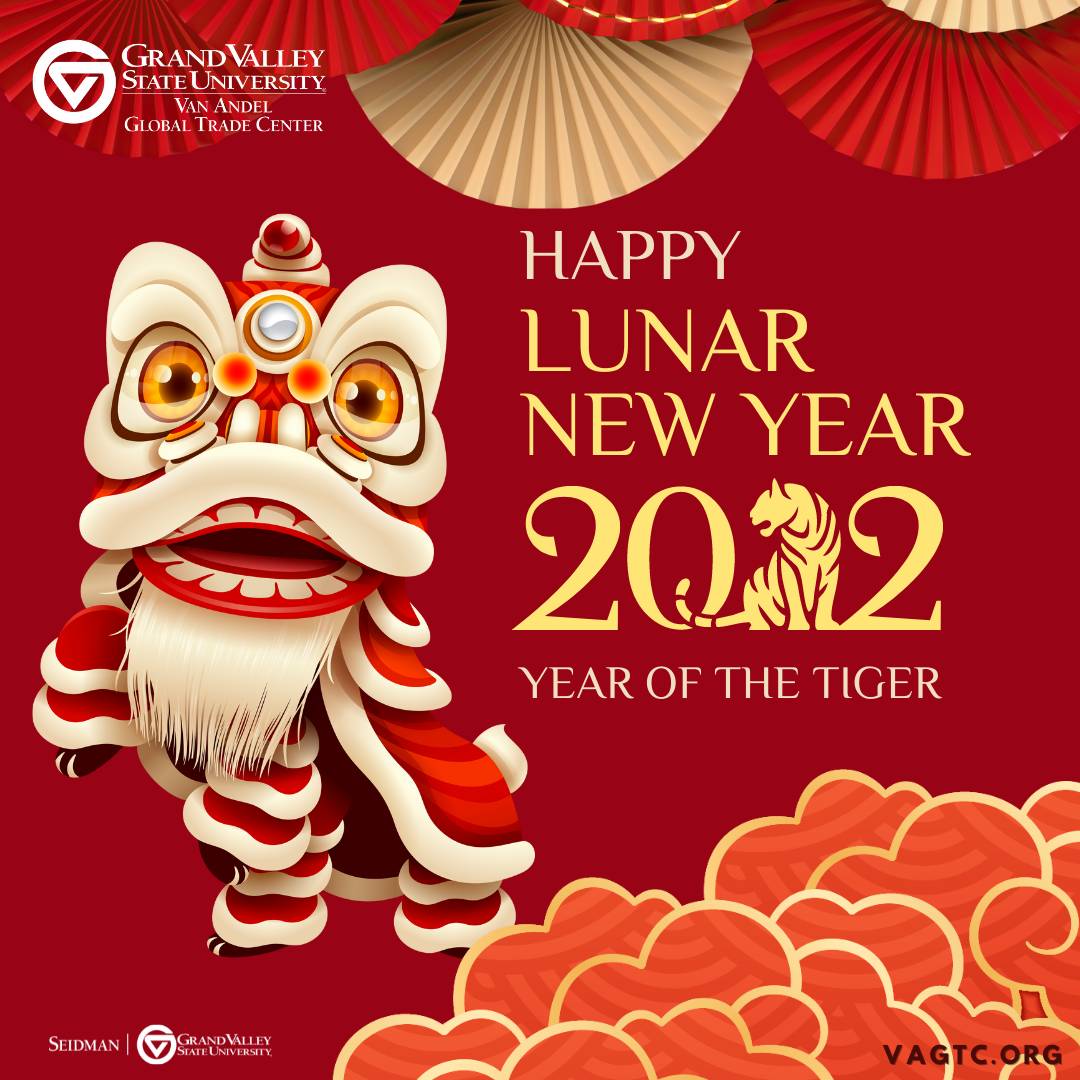 Posted on Permanent link for The Michigander's Guide to the Lunar New Year 2022 on February 1, 2022


Page last modified February 1, 2022
Report a problem with this page