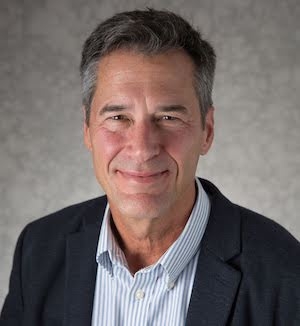 Professor Ford is an award-winning producer and director who has spent 33 years in the video production and broadcasting industries. Ford has been active in broadcast television, film production, corporate and industrial video, educational video and multiple camera live production. Since 2001 he has split his time between freelance video production and teaching.

Professor Ford has worked extensively in broadcast productions for PBS. He spent 9 years working on the Michigan Out-of-Doors Television show as shooter, editor, writer and on-camera talent. In 1998, he became the executive producer of the program. Shortly after, the show became the highest-rated locally-produced PBS program in Michigan with over a half-million viewers per week. Ford is also the creator and producer of West Side Stories Television program on PBS. West Side Stories TV is an award-winning, student-produced, weekly news magazine show that airs on WGVU.

Professor Ford has been teaching at Grand Valley State University since 2014. His research interests include exploring the evolution/intersection of technology in journalism, broadcasting, and education. His latest work involves designing a communications lab as a state-of-the-art collaborative space for students, faculty, and staff in the GVSU’s School of Communications.

Ford has 2 children (who are both Lakers) and a wife who, he says, should be sainted for putting up with him. When his head is not in the “cloud”, you will find him in the woods or on the water.

Page last modified May 11, 2020
Report a problem with this page