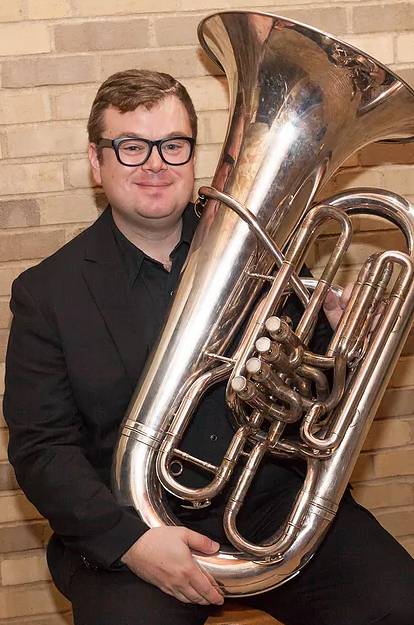 Since beginning his study of the tuba at the age of 11, Paul Carlson has gone on to thrill audiences around the globe. Hailing from Macomb, IL, he started playing tuba in sixth grade band. While in high school, he discovered the joy of performing in tuba quartet, brass quintet, bands, orchestras, and a Dixieland band. He continued his study at the University of Illinois (B.M.), the University of New Mexico (M.M.), and is currently a Doctoral candidate in Tuba Performance at the Indiana University Jacobs School of Music.

Also an enthusiastic educator, Paul has taught at the University of New Mexico, Blue Lake Fine Arts Camp, and the Masterworks Festival, in addition to numerous middle and high schools as brass technician, chamber music coach, and private teacher.

Paul also enjoys playing upright and electric basses with jazz bands and combos. He has had regular gigs at the Chatterbox Jazz Club in Indianapolis, and has performed with the Albuquerque Jazz Orchestra, the Stardusters Jazz Band, and the Indianapolis Jazz Orchestra.

Paul is currently touring the country performing clinics and concerts with the nationally acclaimed Dallas Brass in addition to serving as Affiliate Professor of Tuba and Euphonium at Grand Valley State University.