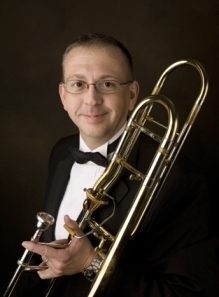 Mark R. Williams, nationally known artist performer and pedagogue of trombone joined the faculty of Grand Valley State University in Fall 2008. Prior to accepting this position, Dr. Williams served for over 22 years in the United States Air Force Band Program and achieved the rank of Chief Master Sergeant. As Principal Trombonist with the USAF Concert Band in Washington, D.C. for 14 years, he performed in all 50 states and throughout Europe and Asia. He was a featured soloist on numerous concert and national tours and was a guest soloist with the U.S. Army Band at the Eastern Trombone Workshop. Dr. Williams can be heard on over 30 compact discs recorded during his tenure with the United States Air Force Concert Band. In addition to his musical duties with the Air Force, Dr. Williams also served for two years as Director of Operations for The United States Air Force Band, coordinating over 4,000 performances. In 2004 Dr. Williams was selected for the position of Band Career Field Manager at the Pentagon where he served with distinction for three years.

In addition to his performance career, Dr. Williams was trombone instructor at Shenandoah University in Virginia. He has presented clinics and master classes throughout the United States.

Dr. Williams received the Bachelor of Music degree from Michigan State University under the tutelage of Curtis Olson and Maury Okun. He received the Master of Music and Doctor of Musical Arts from The University of Texas at Austin, where he studied with Donald Knaub.