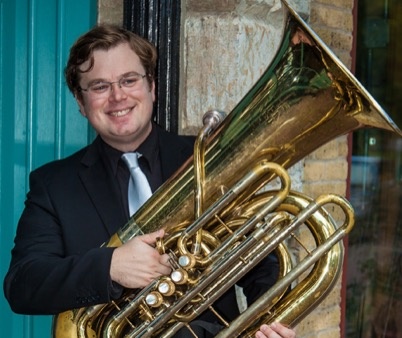 Since beginning his study of the tuba at the age of 11, Dr. Paul Carlson has thrilled audiences around the globe as a soloist and as a member of the internationally renowned Dallas Brass. He has completed studies at the University of Illinois (B.M.), the University of New Mexico (M.M.), and the Indiana University Jacobs School of Music (D.M.). He has studied with Dan Perantoni, Richard White, Mark Moore, and Joseph Goble.

As an active performer, Paul is comfortable in many musical situations. Paul’s performance experience includes the New Mexico Brass Quintet, Santa Fe Symphony Brass Quintet, The King’s Brass, the Walt Disney Collegiate All-Star Band, Harvey Phillips Tuba Company, as well as the Grand Rapids, Southwest Michigan, West Michigan, New Mexico, Louisville, South Bend, and Bloomington Camerata Symphonies. He can be heard on recordings on the Summit and Naxos labels as well as Alfred Music Publishing. An advocate of new music, Paul has premiered numerous pieces for solo tuba, most notably the works of Brian Ciach. Paul was a soloist at the 2014 and 2016 International Tuba Euphonium Conferences, the 2017 Great Plains Regional Tuba Euphonium conference, and the 2015 and 2013 Midwest Regional Tuba Euphonium conference.

Paul is currently touring the country performing clinics and concerts with the Dallas Brass in addition to serving as Associate Professor of Tuba and Euphonium at Grand Valley State University. He is also a Buffet Crampon USA Artist performing on B&S, Meinl Weston, and Besson tubas.