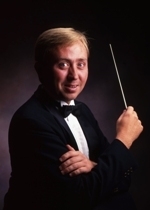 Barry Martin received his M.S. from the University of Illinois, and his B.M. degree in music education from the University of Akron. He observes pre-service teachers. Before joining the music faculty at GVSU in 1994, he taught as a graduate assistant and conducting intern at the University of Illinois. Martin also served as Assistant Director of Bands and Director of the Marching Band at Akron. He has numerous arranging credits and writes music performed by the GVSU ensembles. He is a member of the National Band Association and College Band Directors National Association. He also holds honorary memberships in the Michigan School Band and Orchestra Association, Kappa Kappa Psi Honorary Band Fraternity, Tau Beta Sigma Honorary Band Fraternity, and Mu Phi Epsilon.