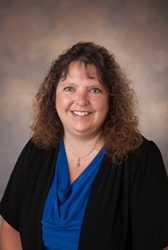 Kristi Fosdick is the Office Coordinator for the Music and Dance Department. Kristi has worked at Grand Valley State University for over 28 years. Prior to her move to the Music Department, 23 years were spent working as Payroll Assistant in the Business and Finance Office. She has a passion for music and is excited to be able to perform her duties in an atmosphere with many talented students, faculty, and staff in the performing arts.

Kristi loves to participate in various community bands. She plays the Alto, Soprano, and Tenor saxophones. She also owns a flute, clarinet, snare drum, and a guitar that she hopes to play in the future. Kristi is a full time member in two community bands. She has performed with the Allendale Community Band, now known as the Allendale Community Jazz Band for approximately 15 years. In 2008 Kristi joined the newly formed Prevailing Winds Community Band based in Grand Haven. Kristi has also participated with the Coopersville Community Jazz Band over several summers. In addition she has performed with the Holland American Legion Band on Tuesday evenings at Kollen Park in Holland during the summer. She performed a couple of times with the Zeeland Community Band as well.

Kristi and her husband Dan have been married for over 25 years and have two children, Jason and Melissa. She enjoys spending time with her family. She also loves about any kind of animal and enjoys her fish, birds, and especially her dogs. Other hobbies include writing poetry, amateur photography, and crocheting.