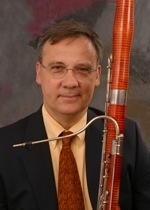 Professor of Music, Danny Phipps is a 1976 graduate of the Curtis Institute of Music in Philadelphia where he was a student of the great bassoonist and pedagogue Sol Schoenbach and chamber music student of John DeLancie and Mason Jones. He earned the Master of Arts degree in music history and the Doctor of Musical Arts degree in bassoon performance from The Catholic University of America in Washington D.C. where he specialized in research and performance practices of the legendary bassoonists of the French Woodwind School of nineteenth-century Paris and the Paris Conservatory.

From 1971 - 1982 Dr. Phipps was a chamber music student of the legendary Marcel Moyse, first as a bassoon participant in his chamber music seminars in Brattleboro, VT, and then later under his baton for performances in Brattleboro and Marlboro and also through private study.  A Tanglewood Festival bassoon fellowship performer in 1977, Dr. Phipps also participated in chamber music performances with famed pianist Lili Krauss throughout Western North Carolina and as a faculty member of the Music in the Mountains Chamber Music Festival from 1970 - 1974. After graduating from the Curtis Institute, he spent several years performing with the Arioso Woodwind Quintet in NYC, and with ballet and opera orchestras in Philadelphia. In 1979, Dr. Phipps joined the faculty of Baylor University in Waco, Texas, where he taught bassoon and music theory and toured the South-Western United States as a member of the Baylor Faculty Woodwind Quintet.

Dr. Phipps was principal bassoonist with The United States Air Force Band in Washington DC for twenty years, retiring in 2002. He held the rank of Chief Master Sergeant and served for many years as the Director of Personnel for the entire Band Squadron, and later, the Manager and Chief Personnel Officer of the USAF Concert Band. As a member of that prestigious organization, he performed in every state in the US, and extensively in Canada, Europe, Japan and China.  After retiring from the USAF Band, Dr. Phipps remained active as a performer and teacher, with both international and national solo appearances and spent numerous years as principal bassoonist with the National Gallery Orchestra and Chamber Players in Washington D.C.

Dr. Phipps has presented clinics and lecture recitals for the International Double Reed Society, the Mid-West Band and Orchestra Clinic in Chicago, and many state music educators' conventions. From 2002 - 2006 he served as Associate Dean of the Music School, Director of Graduate Studies in Music and Professor of Bassoon and Music History at Shenandoah University in Winchester, Virginia.  From 2006 – 2022, Dr. Phipps was Chair of the Department of Music, Theatre and Dance, at Grand Valley State University in Allendale, MI.  In Fall 2022, Dr. Phipps returned full time to teaching.