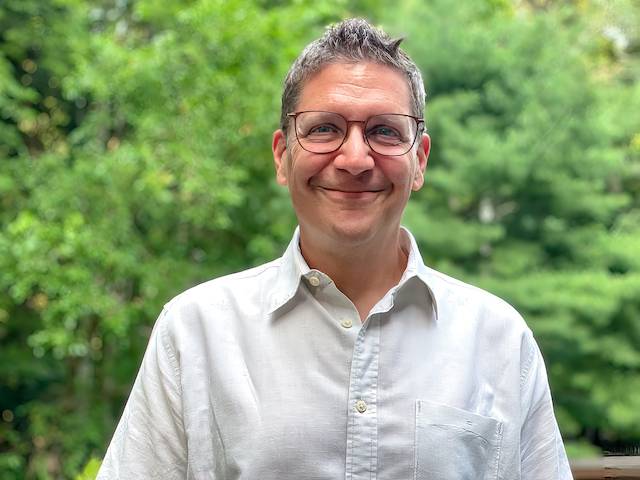 For the past twenty-five years Bill Ryan has been a tireless advocate of contemporary music. Through his work as a composer, conductor, producer and educator, he has engaged audiences throughout the country with the music of our time. He has won the American Composers Forum Champion of New Music Award, the Michigan Governor’s Award in Arts Education, the Distinguished Contribution to a Discipline Award at Grand Valley State University, and was a finalist for the Michigan Distinguished Professor of the Year award.

Bill’s compositions have roots in minimalism, jazz and popular music. His music is energetic, evocative and deeply personal, and has been described as “…constantly threatening to burst at the seams, were those seams not so artfully structured...rarely has music this earthy been so elegant." [Gramophone Magazine]. His music has been performed in major cities and venues across the country, and internationally in Europe, Asia, South America, and Australia. His music has received awards from Meet the Composer, ASCAP, and New Music USA.

In addition to the concert stage, Bill’s music is used regularly by choreographers and dance companies throughout the country. Most recently he composed the music for DEEP: Seaspace, an evening-length collaboration with acclaimed Houston choreographer Karen Stokes. This followed their first evening-length collaboration, The Secondary Colors, and several smaller-scale projects.

With new music ensembles he founded at Suffolk Community College (New York) and then Grand Valley State University (Michigan), Bill has commissioned and premiered over ninety compositions by such notable composers as Sarah Kirkland Snider, Marc Mellits, David Lang, Anna Clyne, Zoe Keating, Rachel Grimes, Nico Muhly, and Mason Bates. Founded in 2006, the GVSU New Music Ensemble has been profiled in numerous publications including Newsweek, the New York Times, and Billboard Magazine, and featured on NPR's Weekend Edition, All Things Considered, WNYC's Radiolab, and Performance Today. With multiple awards from New Music USA and the National Endowment of the Arts, they have performed concerts at major cities and venues throughout the country including twenty national parks, the Bang On a Can Marathon, the New Music Gathering, as members of the all-star ensemble assembled by the Kronos Quartet to perform on the In C 45th Anniversary concert at Carnegie Hall, at the Make Music New York summer festival, and as part of the large ensemble that premiered Sila, by John Luther Adams, at the Lincoln Center Out of Doors Festival.

Bill has produced five critically acclaimed recordings by the GVSU NME, with accolades including top year-end lists by the New York Times, Washington Post, LA Weekly, Time Out Chicago, and many others. Music from their second CD, In C Remixed, was heard on MTV's hit series Teen Wolf, as well as in the film As I AM: The Life and Times of DJ AM, which played in theaters across the United States as well as on the Showtime network. Their first CD, Steve Reich's Music for 18 Musicians, was named one of the top five classical recordings of the decade by WNYC’s John Schaefer and has been heard at over 75 film festivals worldwide as the soundtrack to Michael Langan’s award winning film Choros.