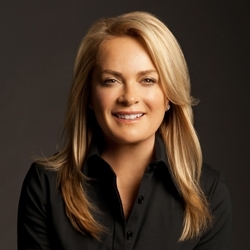 Pamella DeVos is a graduate of Michigan State University with a degree in business. She is president and designer of Pamella Roland, a women's high-end clothing design business, which she founded in 2002. Pamella and her husband, Dan, founded DP Fox Ventures, LLC. Together, they work hard to give back to the West Michigan community through the Daniel and Pamella DeVos Foundation. Their Foundation works closely with many different charity organizations such as the Grand Rapids Art Museum, Grand Rapids Symphony Orchestra, Grand Rapids Griffins Youth Foundation, and the Whitney Museum of American Art in New York City. In recognition of her business accomplishments and community leadership roles, Pamella received the Top Women-Owned Businesses award in Michigan in 2007, along with Northwood University's Distinguished Women award. She was named one of the Most Influential Women in West Michigan in 2008, and was inducted into the Council of Fashion Designers of America (CFDA) in 2010. Pamella and her husband, Dan, are also vice chairs of the Grand Valley University Foundation.