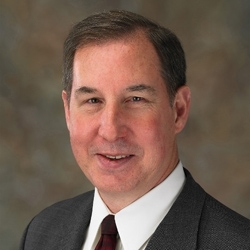 Mark Murray became the third president of Grand Valley State University on July 1, 2001. He left Grand Valley in 2006 to become president of Meijer, Inc. He is now vice-chairman of Meijer, having transitioned out of day-to-day business leadership at the company. Mark serves on the board of DTE Inc. in Detroit, and is an independent trustee for Fixed Income and Asset Allocation with Fidelity in Boston.  Before arriving at Grand Valley, he served as state treasurer and education policy advisor to Governor John Engler from 1999 to 2001. Prior to his appointment to that office, the lifelong Michigan resident spent more than 20 years in various state government leadership positions, including state budget director, and posts in the departments of social services and commerce.