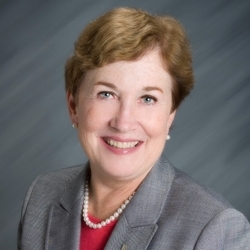 Laurie Beard, President & CEO of Founders Bank & Trust, was born and raised in Virginia, IL. She graduated from Millikin University, Decatur, IL with her Bachelor of Science in economics and finance, and then earned her Master of Business Administration from Grand Valley State University. She worked as a Bank Examiner in Chicago and later in the investment world with Paine Webber and A.G. Edwards before joining the senior management team in helping to organize Founders Bank & Trust in 1991. Laurie was appointed President & CEO of Founders Bank & Trust in 2001. Laurie serves on the Grand Valley State University Women's Center Advisory Board and the Seidman Dean's Advisory Council, and is a director of the Grand Valley University Foundation. She also serves as a trustee of the Grand Rapids Community Foundation Board, and is currently serving on the Senior Meals Capital Campaign Committee and the Ehlers Transit Partnership. Nationally, she serves on the American Bankers Association Community Bankers Council.