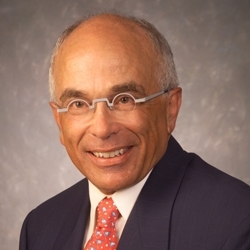 Jeffrey (Jeff) Padnos joined his family's business in 1979, becoming president in 1988. He helped the business grow from two locations to 18 locations with over 400 employees, providing scrap processing and recycling services in paper, plastics, metals, and more. Prior to that, he earned his B.A. at Harvard and then spent two years with the New York City Environmental Protection Administration, where he helped to start NYC's recycling program. After some time off for travel, Padnos returned to Harvard for his MBA. He then worked with the international consulting firm, McKinsey & Company, for four years, first in Chicago, then in New York. Padnos is actively involved in the civic community of West Michigan. He has served on the boards of numerous organizations, including Grand Rapids Symphony, the World Affairs Council, the Alliance for Health, and the Holland Chamber of Commerce.