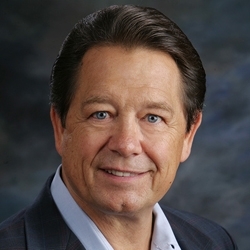 Jim Brooks graduated from Culver Military Academy and earned his BA and MBA in Food Marketing Management at MSU. He spent the next 30 years working in all areas of the family’s soft drink business, including service as CEO international franchisor Squirt & Co., Brooks Beverage Management and Beverage America. Like his father before him, Jim was inducted into the Beverage World Hall of Fame. Following the sale of the business in 1998, Jim redirected his experience in strategic planning and innovation as co-founder and chair of the West Michigan Strategic Alliance and the Holland-Zeeland Model Community Initiatives. In addition, he has served on a number of corporate and nonprofit boards. In 2005 the Brooks family entered a partnership with Investment Property Associates, headquartered in Grand Haven, which develops and manages multifamily and senior living communities in West Michigan and Arizona. Jim holds an honorary degree from GVSU and he and his wife, Donna, were awarded the Grand Valley Enrichment award in 2003. They both received the Slykhouse Lifetime Achievement Award from the Grand Rapids Economic Club in 2015.