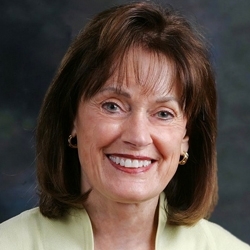 Donna Brooks was a trustee on the Board of Grand Valley State University from 1993-2009, serving as chair twice during her tenure, and is currently an honorary life member. She and her husband, Jim, serve as co-chairs of the Grand Valley University Foundation. Donna has served as a board member of various nonprofit and educational organizations in Holland and Grand Rapids. She has assumed leadership roles in several Grand Valley campaigns, including the current Laker Effect Campaign. In 1991, Donna received the Grand Valley University Foundation Leadership Award, and in 2009, she received an honorary degree from GVSU. Donna has been honored with the AFP’s 2004 Distinguished Philanthropist Award for West Michigan, and in 2011 she and Jim received the Russell G. Mawby Award for Philanthropy. They have also received the Grand Valley Enrichment Award and the Slykhouse Lifetime Achievement Award from the Grand Rapids Economics Club in 2015. Donna holds a BS in Dietetics and MS in Nutrition from Michigan State University.