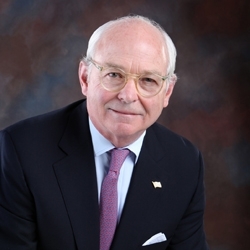 David Frey is chairman of the Frey Foundation. Previously he was chairman of Union Bancorp, Inc. (JPMorgan Chase). He is also the co-chair of the Grand Action Committee which led the design and fundraising effort for the Van Andel Arena, DeVos Place Convention Center, Meijer Majestic Civic Theatre, and the Downtown Market. He received an honorary Doctorate of Business Administration from the Grand Valley State University Seidman School of Business in 1998. He was honored as the 2003 Executive Leader by the Association of Fundraising Professionals West Michigan Chapter for outstanding leadership that has marshaled business and civic support for philanthropy. In 2003, he received the Business Person of the Year Award from the Economic Club of Grand Rapids. He chaired the Grand Design 2000 Committee which raised the funds for the development of GVSU’s DeVos Center. Most recently he served as the co-chair of the Shares in a Common Future, the campaign for the new Seidman Center housing the F.E. Seidman College of Business.