We strive to provide Grand Valley alumni with a sense of community and pride, as well as lifelong learning opportunities. We do this by engaging alumni with student support activities, social and professional development events, communications, ways to give, and academic resources.

Email GVSU Club Sports, [email protected], with any questions you have about club sport alumni relations.

The GVSU Alumni Relations office strives to provide Grand Valley alumni with a sense of community and pride, as well as lifelong learning opportunities. We do this by engaging alumni with student support activities, social and professional development events, communications, ways to give, and academic resources.

100 percent of donations to club sport teams go directly to those students involved. Whether it be equipment to supporting national championship runs, all the donations go directly to students involved with that particular sport. Donors like you are making it possible for students to prepare for what's next in a changing world, and for Grand Valley to continue to provide the talent our region and our state need for the future.

"The most satisfying gifts come from a thoughtful conversation between the donor and the university. To start your conversation, contact the individuals below or the University Development Office at (616) 331-6000 or [email protected]. We look forward to speaking with you."

Be an Alumni Champion

Grand Valley State University’s Alumni Champions increase alumni engagement with the university. This is critical to our future success as an institution. Our Alumni Champions are committed to supporting the university themselves and to sharing the excitement and momentum of Grand Valley with their fellow alumni, encouraging them to play a more active role in the support of our students.

Thank you to all of our Alumni Champions who are helping to increase alumni participation and ownership of Grand Valley State University. We are so grateful to you for your dedication to Grand Valley.

The GVSU Alumni Relations office strives to provide Grand Valley alumni with a sense of community and pride, as well as lifelong learning opportunities. We do this by engaging alumni with student support activities, social and professional development events, communications, ways to give, and academic resources.

Alumni Networks are groups of alumni who unite through periodic events to socialize, network, learn, and participate in community service in order to stay connected with each other and the university. Networks are broken down by region, based on location, and affinity, based on affiliation to a certain college/major, program, student organization, or other special interest.

There are no upcoming Events at this time

If you are interested in offering a discount to Grand Valley State University alumni, please visit our terms and conditions page.

This directory is intended to highlight the extraordinary accomplishments of our alumni business owners, and provide our alumni and other members of the GVSU community with the opportunity to consider doing business with a fellow Laker for a Lifetime.

More information can be found on the Alumni Relations Alumni Map webpage.

It is GVSU policy not to release private personal information without consent.

If you have information regarding the death of a Grand Valley graduate, please complete the following information. Entries will be displayed in the Alumni section of  GV Magazine. 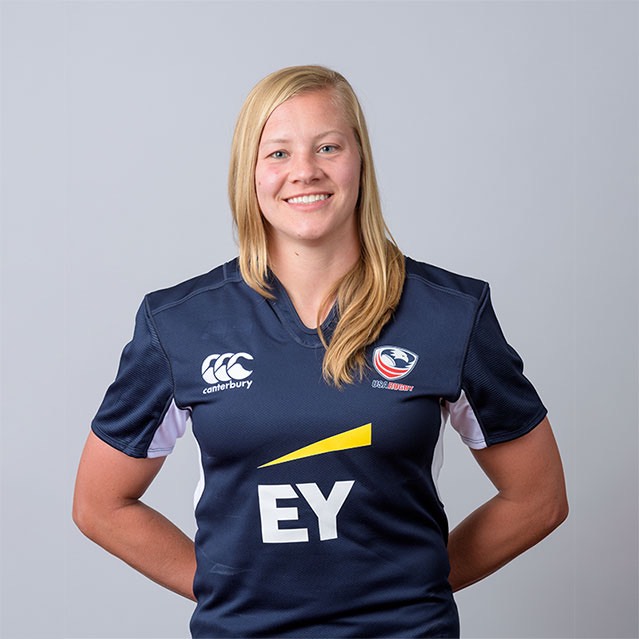 When she was in high school, Kitlinski was a member of the track and cross country teams. She joined Grand Valley’s rugby team, in part, to play a contact sport. “I liked the team aspect of it, and that you didn’t need to have previous experience,” she said.

Rugby coach Bob Richthammer recalled Kitlinski’s first practice. “She ran so fast when she got the ball, I think she ran over three people,” he said.

Easily adapting to rugby in college, Kitlinski became a Collegiate All-American in 15s from 2010-11 before moving on to compete in the Women's Premier League where she won a national championship in 2014 and 2015 and was named an MVP in 2015.

“She began a wave of recruiting for our program as other players knew of Joanna and wanted an opportunity to play with her,” Richthammer said. “She’s a good ambassador for Grand Valley now, telling players about our program.”

Following her second national championship, Kitlinski earned her first cap with the U.S. Women's National Team 15s in July of 2015 against Canada where she scored her first try.

Kitlinski is also fluent in Polish and has a Bachelor's Degree in Psychology. 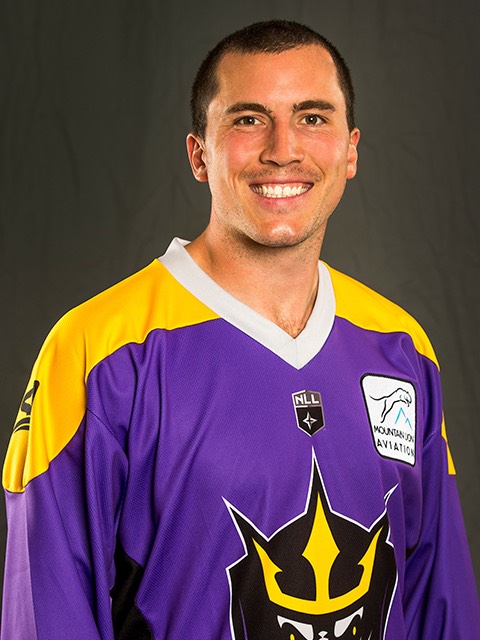 "We had come so close, and so much has been put into growing that program," Holding said. "It was a great feeling to watch the team take the next step and bring home the championship."

Holding, a two-time All-American attackman while at Grand Valley State University, followed suit at the FIL Lacrosse World Championships this summer. The native Canadian tallied a goal and an assist in Canada's gold medal-clinching win over the United States.

"Just making the team, and being able to put on the Canadian jersey, was unbelievable," Holding said. "To be able to win on that field against a team that everyone was saying was unbeatable…was the greatest feeling in my life."

Named an assistant captain for the club, Holding has appeared in every game in team history. He led the Seals in loose balls the previous two seasons and added nine goals. He is also a major part of the team’s grassroots and community relations efforts in the San Diego community. The defenseman was selected by San Diego in the 2018 NLL Expansion Draft.

He made a name for himself in 2015, leading all NLL defensemen in assists and short-handed assists while finishing second in points. Holding was named the 49th best player in the NLL by ILIndoor in October 2015, marking the first time in his career that Holding made the publication’s list of the Top 50 players in the league.

During Ferguson’s 2006-07 season, current head coach Bolhuis entered his first season on the Lakers’ coaching staff as an assistant. The two worked out together in the gym, giving Bolhuis firsthand encounters with the future UFC titleholder.

“I came on staff for Tony’s second year, and I was about the same exact size as him,” Bolhuis said. “I had a chance to work out with him on a regular basis. He’s incredibly gifted and works very hard-nosed.”

Although wrestling was something Ferguson clearly excelled at, the idea of competing in a combat sport was one that had lingered through his mind since he was a little kid. At the peak of his physical condition, Ferguson decided to leave GVSU before graduation and pursue his MMA training in California.

As someone who saw Ferguson’s potential up close, Bolhuis couldn’t be angry with the Muskegon native’s decision.

“(Ferguson) eventually sat us down and flat out said, ‘I’m gonna go to the UFC, and I’m going to win a belt,’” Bolhuis said. “We all supported him because we knew how talented he was. And he saw it through to at least have the opportunity.”

In 2011, Ferguson signed with the UFC, marking the first step toward achieving his goal of collecting a title.

Just a couple of years after Ferguson’s GVSU departure, in came another promising freshman to the Laker wrestling club, Kevin Lee, who joined the program in 2010. But unlike his successful predecessor, Lee came into the program with little experience on the wrestling mat. Lee’s only wrestling experience came from his junior and senior years at Southfield High School.

“As far as wrestling goes, Kevin was in a totally different spot than Tony,” Bolhuis said. “He was incredibly raw and didn’t know much yet.”

Although Lee lacked experience, the coaching staff noticed that his physical capabilities were unlike any other that they had in the program. With his uncanny agility and strength, the coaching staff began matching him up with the strongest teammates in practices and matches early in his wrestling career. Even though Lee entered with little experience, Bolhuis couldn’t believe how fast he absorbed the physicality and strategy of the sport.

“Kevin is just an incredibly intelligent guy, and it showed how he picked up this sport so quickly,” Bolhuis said. “Not only wrestling, but he had book-smart intelligence and then all these other business and street smarts to make up who he really was.”

Lee wrestled with GVSU from 2010 through 2012. During his time with the team, Lee took on the “thickest competition” in program history. Although he never earned the title as an All-American, Lee competed against the top 16 wrestlers in the country and qualified for a national tournament.

During the 2011-12 season, the Detroit native began his fighting career in amateur mixed martial arts. While also practicing with the Lakers on his groundwork, Lee began training in boxing and in Brazilian Jiu-Jitsu, a martial art that focuses on grappling and ground fighting.

All of these various training regimens led up to Lee’s ultimate goal to compete in the UFC.

Although he was a semester away from finishing with a degree in biomedical sciences, Lee decided to leave school early in order to commit his full concentration in preparation for his combat career. On the heels of an undefeated amateur career, Lee turned professional in 2012 and signed with the UFC in 2013. 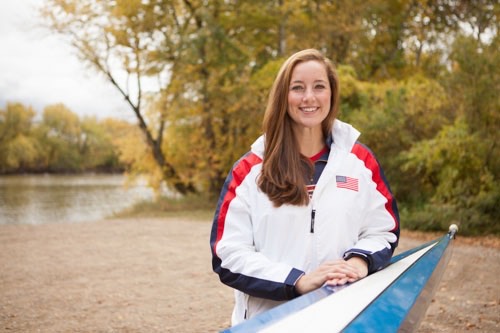 Life has been speeding up for Sarah Zelenka, ’09 since graduation. In 2009, she represented the U.S. in the World Rowing Championships and has been setting and achieving goals one after another ever since. To achieve her goal as an Olympic rower, she first had to propel herself through some rough waters.

Zelenka joined the Grand Valley Rowing Team in her freshman year with no prior experience. One of the first setbacks that she encountered was the expense of rowing. Since crew is not one of Grand Valley's varsity sports that offer some sort of financial support for a limited number of university athletes, Zelenka was not eligible for scholarships. Like many other Laker athletes, Zelenka had to pay for tuition, school supplies, and living costs out of her own pocket. Despite this challenge, she immersed herself in sports and participated not only in the rowing club but also in intramural basketball and intramural badminton. Getting accustomed to a demanding schedule is what she says prepared her for a hectic life as an Olympic athlete.

I am very confident in the education I received at GVSU,” she said. “The great experiences I was exposed to while studying at GVSU have made a great impact on me and will stay with me forever.

As a member of U.S. Rowing, Zelenka earned a gold medal in women’s four at the 2011 rowing championships. She and Hendershot won first place at the 2012 Olympic trials. Zelenka placed 4th in the women's pair in the 2012 London Olympics.

One of the photos of Zelenka taken last summer in London showed her with other U.S. teammates, all wearing their collegiate uniforms. She was the only person who came from a club team, not a varsity team.

Like many of Grand Valley’s club sports, rowing competes against other varsity teams and regularly participates in elite races such as the Dad Vail Regatta in Philadelphia.

Are we missing someone?

If you are or know of a notable alumni, please reach out to Club Sports via e-mail. 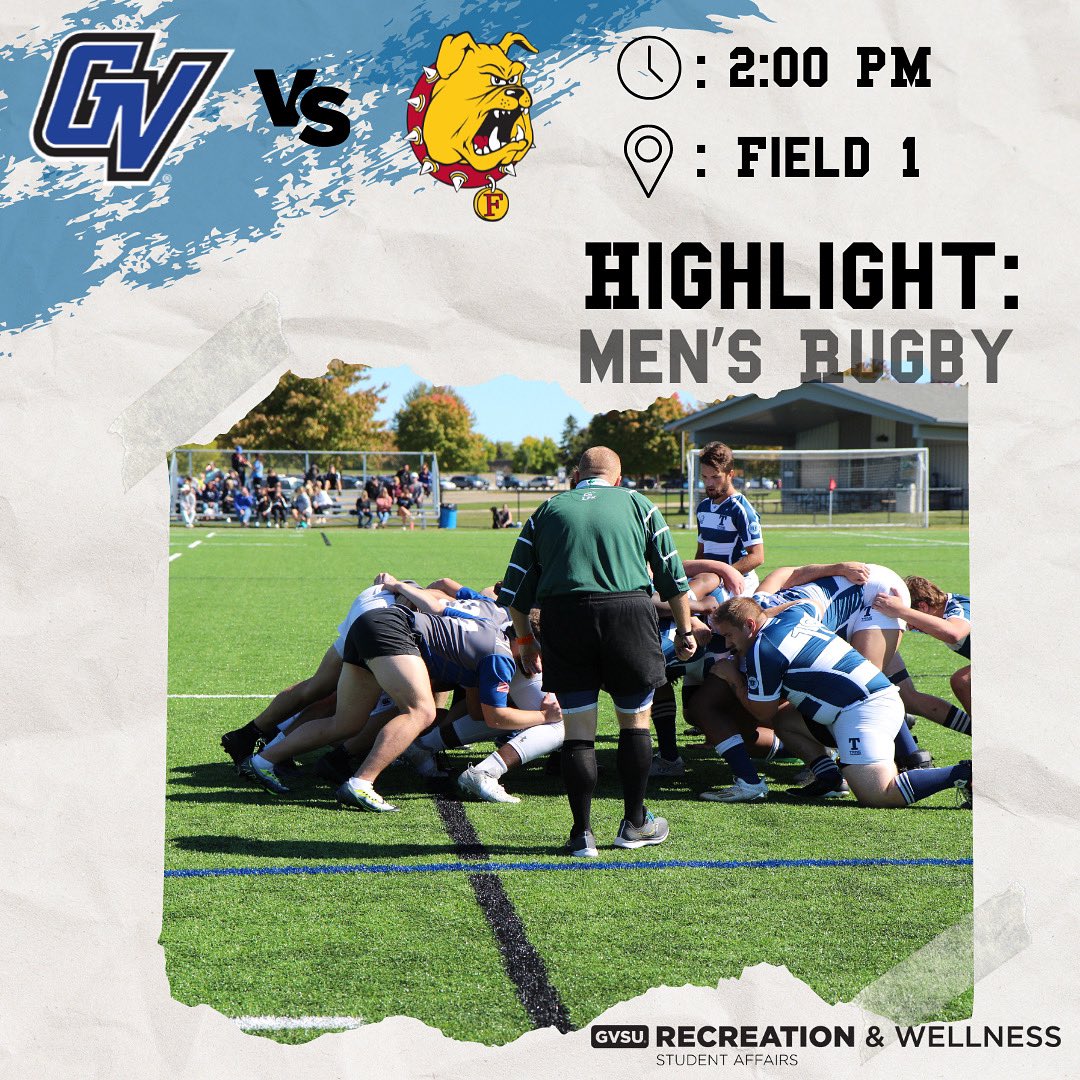 GVSU Club Sports
@GVSUClubSports
Come on out at 2PM Saturday!! We’d love to see you there! 🏉 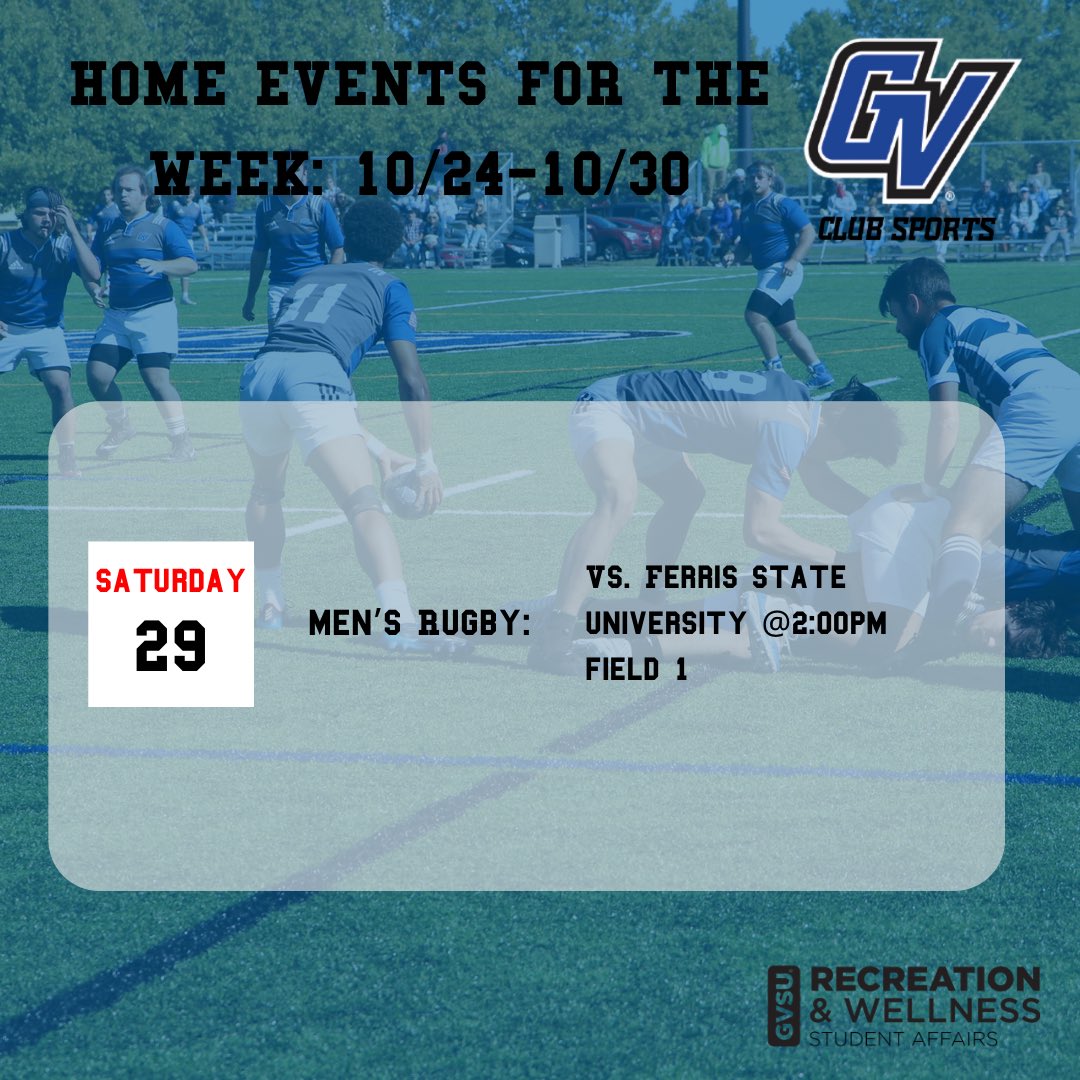 GVSU Club Sports
@GVSUClubSports
⏰ Tomorrow, 7PM Field 1!! Be there or be 🟦 Wear blue and bring your student ID for free hot chocolate and coffee between games at 8:30pm while supplies last!!☕️ 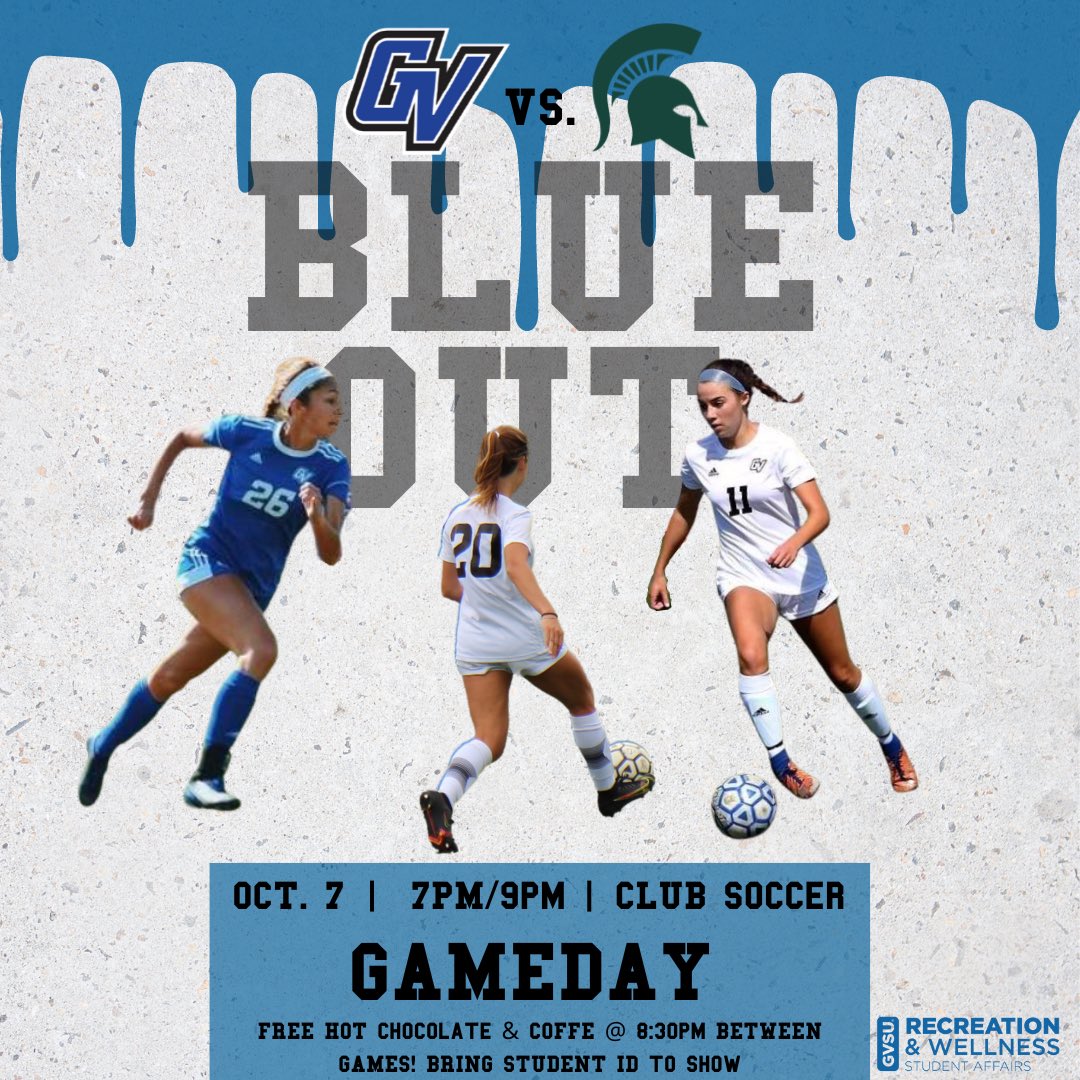 GVSU Club Sports
@GVSUClubSports
Tomorrow!!! Wear your blue!!🥶 Free hot chocolate and coffee will be provided at 8:30PM for all students with their ID!! 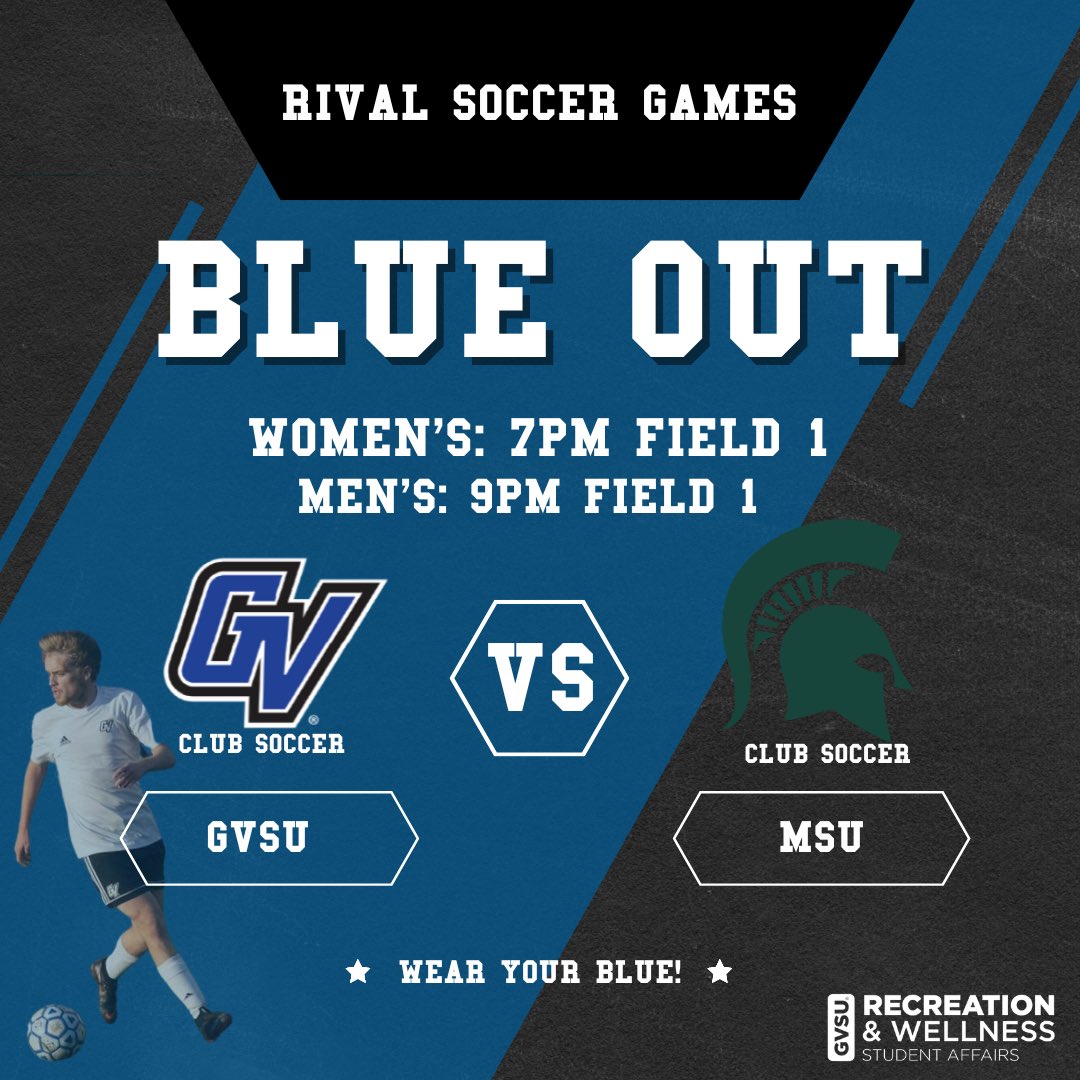 GVSU Club Sports
@GVSUClubSports
Blue Out!! 💙🦋🧢🌀Make sure to wear your GV blue October 7th at the Men’s and Women’s soccer game vs. MSU! This will be the largest club sport event of the year and we want as many students in the stands cheering as possible!📣 ⏰: Women’s: 7PM - Men’s: 9PM 📍: Turf Field 1 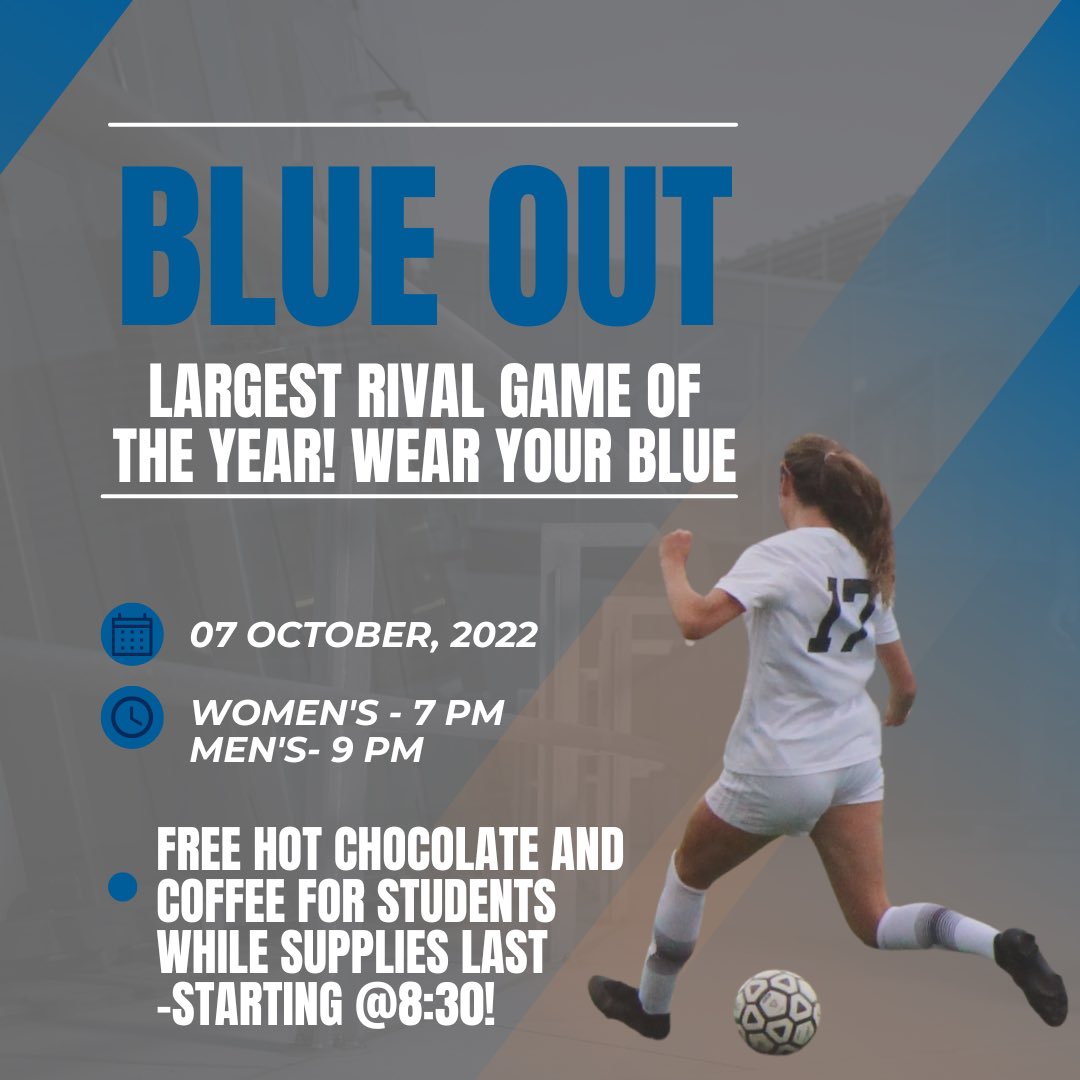 
Page last modified July 21, 2021
Report a problem with this page