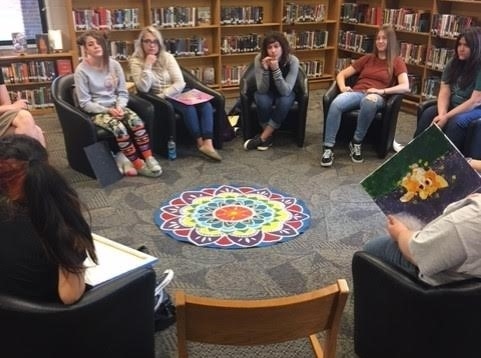 The concept of the “school to prison pipeline” is often mentioned in discussions of race, criminal justice, and cultural competency. It suggests that traditional school discipline suspensions and expulsions may not correct the issue at all, but instead may cause the punished student to continue on a downward spiral leading in some cases to juvenile detention or even prison.

A purely punishment-based response to rule violations does not address root issues, nor does it work to repair the harm done to other members of the school community. Restorative circles, introduced in local area schools by the Dispute Resolution Center of West Michigan, seek to fill that need through a new approach. Those affected by an action are brought together to repair the harm in a restorative circle.  During the process participants answer questions, including:

What happened?
Who was affected and how?
How can the harm be repaired?
What can we do so the same thing doesn’t happen again?

The participants work together to hold individuals accountable for their actions and to repair any harm causes. The facilitator records and prints the agreement.  All participants sign the agreement and are given a copy. Many types of harms have been addressed through the restorative circle process including:  threats, fights, social media controversies, vandalism, theft, bullying and teacher student disputes.  The basic prerequisites are that there was a harm and those who are affected are willing to participate in the resolution.

Criminal Justice professors Patrick Gerkin and John Walsh and graduate assistant Robert Joseph evaluated this program during the 2016-2017 school year and co-authored a report on their findings. During this period, over 900 circles were facilitated, and:

As with any approach, the program is not a perfect solution. Chances of success depend upon implementation. If administrators don’t completely buy into the concept, or if schools only use it as an “add on” to their current methods, success will be more limited. The program will continue to be developed to address this and other issues. The first report is an important and beneficial resource. Joseph’s participation and the contributions of the graduate student community were key factors in its influence.


Page last modified August 18, 2021
Report a problem with this page