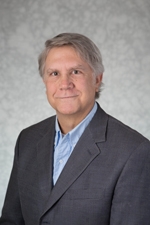 Dr. Gregory Wolffe is a Professor in the School of Computing and Information Systems at Grand Valley State University. He has been a member of the GVSU faculty since 1998.

Dr. Wolffe received his B.S. in Biology from Michigan State University. Following his undergraduate work at Michigan State, Dr. Wolffe worked in pharmacology and toxicology labs, spending the duration of that time at the Medical College of Wisconsin. While there, Dr. Wolffe watched with interest as computers invaded all aspects of the lab, and began taking computing courses, culminating in a Ph.D. in Computer Engineering from the University of Wisconsin-Milwaukee.

During his time at GVSU, Dr. Wolffe has continued his love of science, specializing in the use of computers to analyze, mathematically model, simulate, and solve problems in various scientific disciplines. Currently, Dr. Wolffe maintains the Distributed Execution Network (DEN), a high-performance computing lab, focused on the big data and large problems that science provides. It is here that Dr. Wolffe most directly pursues his true passion: mentoring students on to graduate school and rewarding careers. He has involved students successfully in the entire research process, from grant-writing and acquisition to publication and dissemination.

Students appreciate the significant time and effort Dr. Wolffe puts into their education and his commitment to providing students with hands-on experience. Many students have noted him as being a very influential person throughout their undergraduate career and beyond and admire Dr. Wolffe’s ability to promote hard work and creativity in his students.

Dr. Wolffe was selected by the GVSU Student Senate to speak at the Last Lecture Series and received the Outstanding Faculty Mentor award from the GVSU Graduate Student Association. Dr. Wolffe is also a past recipient of the Pew Teaching Excellence award and the Glenn A. Niemeyer award, given to individuals who possess a superior student-centered approach to teaching with continued development of excellence in the classroom that instills in their students a love of learning.

Dr. Wolffe lives in West Michigan with his wife, two daughters, and a rotating cast of furry companions. Dr. Wolffe is also an avid hockey fan and is still secretly awaiting his call-up from the Detroit Red Wings.


Page last modified March 25, 2016
Report a problem with this page