An endowed fund has been created to support the professional development of Advertising and Public Relations students at Grand Valley State University. The Frank Fund was created in honor of Professor Frank Blossom, a 40-year ad industry veteran, who retired from GVSU after 10 years of teaching. Frank passed away in April 2022, but his memory and his mission live on. The fund supports professional development opportunities for Advertising and Public Relations majors, ranging from airfare to conference registrations to experiential learning outside the walls of GVSU.

The Frank Fund is very much in line with Frank Blossom’s legacy of giving and mentoring. He was known for his care for students and for going above and beyond to help them succeed. “Frank was passionate about students gaining experience beyond the classroom, whether that was hands-on projects or networking with industry professionals,” said Adrienne Wallace, Associate Professor, GVSU Advertising & Public Relations.

The level of Frank Blossom’s care for students can only be matched by his extensive experience and expertise. Frank is a popular, tried and true brand. A household name - not unlike the brands he helped to launch, rebrand, reposition or expand in “real life” in his decades of practice. That place students are told about, the one found in the case studies of textbooks, the same world revisited in “Mad Men,” is the world in which Frank lived.

As successful as Frank was in the “lab” of the professional world, he was even better in the classroom. Frank’s storied career as Creative Director at Leo Burnett, D’Arcy, Noble & Associates and Felder Communications Group propelled top brands like Heinz Ketchup, Maytag and Lay’s Potato Chips into mainstays of American culture.

Outside the classroom, Frank was no less impressive. Instead of stagnating, he renewed his own practice in a number of ways. In 2001, Frank founded The Polishing Center, a post-graduate creative school in Grand Rapids, where he served as Head Coach helping young creatives build their portfolios and interviewing skills to land jobs of their dreams. He also managed his consulting practice, Frank Communications, and served as head referee for the Creative Smackdown - a creative competition showcase bringing together students from all over Michigan with advertising and design professionals for critical interpretation and feedback jumpstarting young creative careers. He also started Yardsticks, a biennial creative pitching contest that proposes real answers to tough problems for community brands and companies in the greater Grand Rapids area.  In 2008 he created Happen, an “edgy” consulting and co-opting team focused on building young creative talent in Grand Rapids and bridging the creative abyss between Boomers and Gens X/Y/Z. 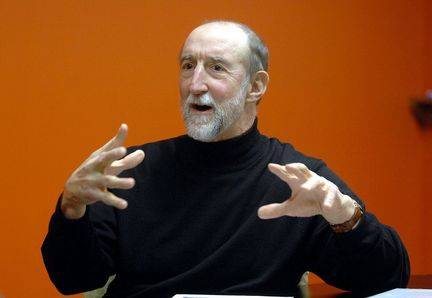 In 2010, Frank was awarded The Silver Medal, the American Advertising Federation’s highest honor to professionals who have made outstanding contributions to the advertising and marketing industry and who have been active in furthering creative excellence and responsibility in areas of social concern. For the past 20 years, The American Advertising Federation, the National Student Advertising Competition, and other ad associations have tapped Frank’s experience to judge local, regional, national and international advertising competitions.

Finally, in the last few years of his career at GVSU, Frank created “The Bloom Group” – an integrated practice model mirroring that of large firms that sought to solve many complicated real-world problems for companies: from initial client meetings, to pitch, to implementation and finally evaluation. The Frank Fund was launched with money contributed by area companies with whom Blossom and students worked on special projects as part of the Bloom Group.

To be a part of Frank Blossom’s legacy and to contribute to the success of GVSU’s AdPR students, please consider giving here.