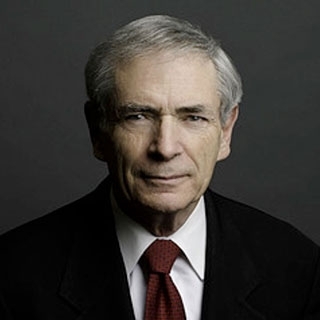 The breadth and scope of J. Tinsley Oden’s illustrious career and distinguished public service defy, for me or anyone for that matter, to provide an adequate description herein. He is the Associate Vice President for Research at The University of Texas at Austin and the founding Director of the Institute for Computational Engineering and Sciences (ICES), which was created in January of 2003 as an expansion of the Texas Institute for Computational and Applied Mathematics, also directed by Oden for over a decade. The Institute supports broad interdisciplinary research and academic programs in computational engineering and sciences, involving five colleges and 18 academic departments within UT Austin.

An author of over 600 scientific publications, Dr. Oden is an editor of the series, Finite Elements in Flow Problems and of Computational Methods in Nonlinear Mechanics. Among the 50 books he has authored or edited are Contact Problems in Elasticity, a six-volume series: Finite Elements, An Introduction to the Mathematical Theory of Finite Elements, and several textbooks, including Applied Functional Analysis and Mechanics of Elastic Structures, A Posteriori Error Estimation in Finite Element Analysis (with M. Ainsworth), and, more recently, An introduction to Mathematical Modeling: A course in Mechanics. In research publications, again to just mention a few, he contributed key fundamental papers in finite elements for fluid dynamics, contact problems, space--time finite elements, inelasticity, plate and shell analysis, and adaptive modeling.

Since the publication of his treatise, Finite Elements of Nonlinear Continua, published in 1972, which was subsequently translated into Russian, Chinese, and Japanese, Dr. Oden is widely credited for the early development of the field of Computational Mechanics; a new intellectually rich discipline that integrates mathematics, computer science, physics, and mechanics to solve problems in science and engineering. Computational Mechanics has since become a fundamentally important discipline throughout the world, taught in every major university, and the subject of continued research and intellectual activity impacting science, medicine and engineering with applications including manufacturing, disaster prevention, drug design, surgery, and climate and weather prediction.

Dr. Oden is a member of the U.S. National Academy of Engineering, a Fellow of the American Academy of Arts and Sciences, and an Honorary Member of the American Society of Mechanical Engineers. He is a Fellow of seven international scientific/technical societies: IACM, AAM, ASME, ASCE, SES, SIAM, and BMIA. He is a Fellow, founding member, and first President of the U.S. Association for Computational Mechanics and a Fellow, founding member, and past President of the International Association for Computational Mechanics, which is an international federation of over 30 other scientific organizations dedicated to computational mechanics such as the Japan Society for Computational Engineering and Sciences (JSCES). He is a Fellow and past President of both the American Academy of Mechanics and the Society of Engineering Science. In recognition of his outstanding contributions and eminent achievements in the field of computational mechanics, Dr. Oden has received numerous prestigious awards including the A. C. Eringen Medal, the Worcester Reed Warner Medal, the Lohmann Medal, the Theodore von Karman Medal, the John von Neumann medal, the Newton/Gauss Congress Medal, and the Stephan P. Timoshenko Medal. He was also knighted as "Chevalier des Palmes Academiques" by the French government and he holds five honorary doctorates, Honoris Causa, from universities in Portugal (Technical University of Lisbon), Belgium (Faculte Polytechnique), Poland (Cracow University of Technology), the United States (Presidential Citation, The University of Texas at Austin), and France (École Normale Supérieure Cachan ENSC).

In 2004, Dr. Oden was among the seven UT-Austin engineering faculty listed as the most highly cited researchers in the world from 1981-1999 in refereed, peer-reviewed journals, according to the International Scientific Index.  In 2009, Oden was elected as a Fellow of the Society for Industrial and Applied Mathematics (SIAM) and received both the SIAM Distinguished Service Award and the University Cooperative Society's Career Research Excellence Award. In 2011, Oden received the prestigious SIAM/ACM Prize in Computational Science and Engineering (CS&E Prize) for his outstanding research contributions to the development and use of mathematical and computational tools and methods for the solution of science and engineering problems. In 2012, the U.S. Association for Computational Mechanics established the J. Tinsley Oden Medal to recognize “outstanding and sustained contribution to computational science, engineering, and mathematics.” Most recently, Oden was honored in Japan as the 2013 Laureate for The Honda Foundation Prize for his role in establishing the field of computational mechanics.

Dr. Oden served as Co-Chairman of the Accelerated Strategic Computing Initiative (ASCI) Panel for Sandia National Laboratories.  He currently serves as a member of the Predictive Engineering Science Panel (PESP) for Sandia National Laboratories and as a Member of the IUTAM Working Party 5 on Computational Mechanics. He serves on numerous organizational, scientific and advisory committees for international conferences and symposiums. He is an Editor of Computer Methods in Applied Mechanics and Engineering and serves on the editorial board of 27 scientific journals.

Dr. Oden's current research focuses on the subject of multi-scale modeling and on new theories and methods his group (at ICES) has developed for what they refer to as "adaptive modeling."  These methods help bridge the influence of events at many scales, from that of atoms and electrons to full-scale systems, such as machines, aircrafts and automobiles. In effect, they are noted for developing mathematical estimates of errors in computer simulations, and ways to systematically reduce and control such error.  He is also a leader in "predictive science," in which uncertainty in observational data and model parameters is estimated using mathematical (Bayesian) statistics and used to validate multiscale models of atomistic and molecular systems and to determine the accuracy of the computational predictions.  Today, these subjects form the foundation of computational engineering and science, with applications including laser treatment of cancer (particularly prostate cancer), new material for semiconductors manufacturing at the nanoscale level, disaster prevention, drug design, surgery, and climate and weather prediction.

Dr. Oden refers to computational science as the "third pillar" of scientific inquiry, standing beside theoretical and experimental science. it is fair to say that J. Tinsley Oden is to computational science what John von Neumann was to modern computing; he is a game changer (if not a founding father) of the subject of Computational Science which serves as a new paradigm for acquiring knowledge and informing decisions important to humankind.