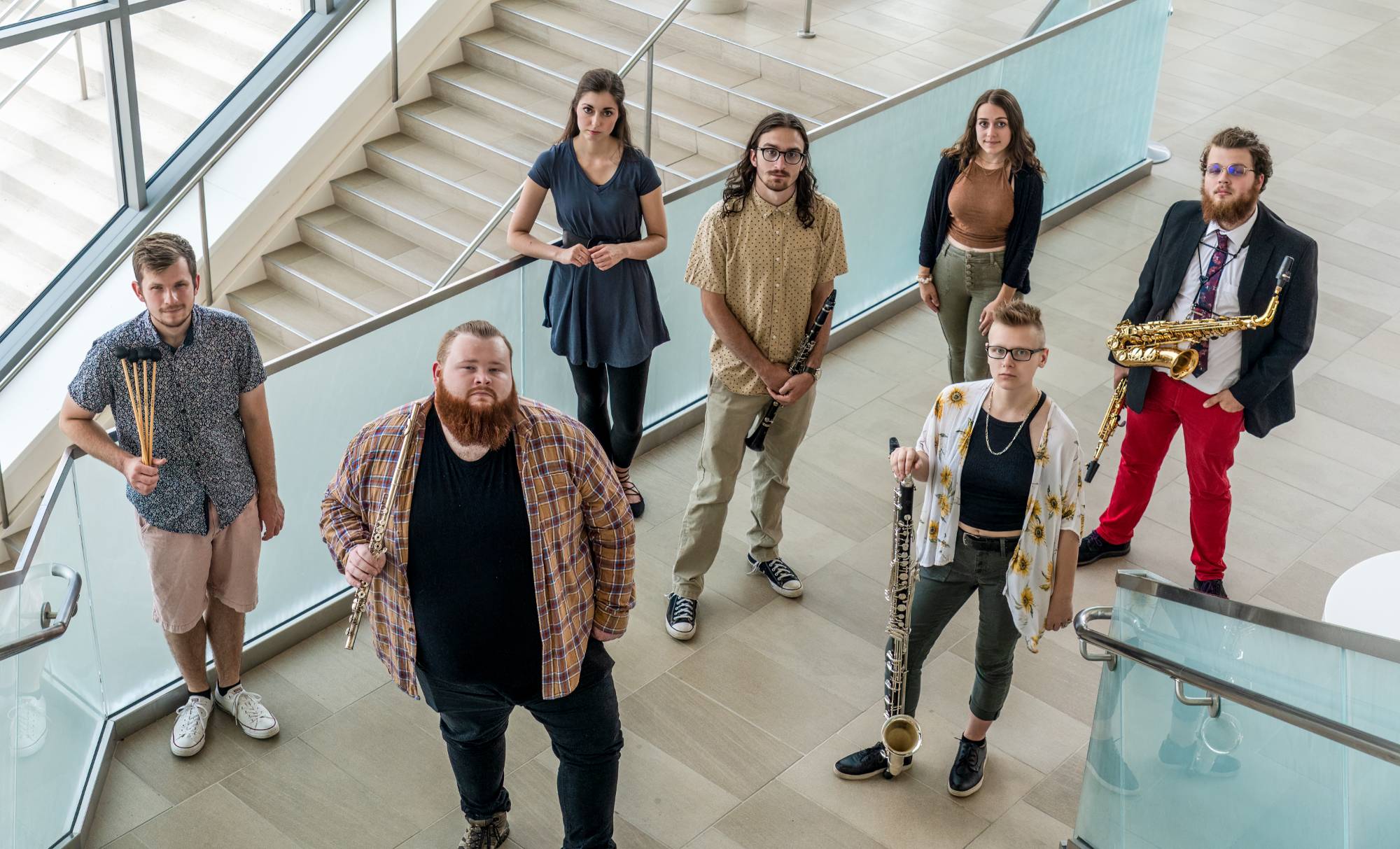 Based in Allendale, Michigan, The New Music Ensemble at Grand Valley State University is an undergraduate ensemble that promotes the music of our time through commissions, tours, recordings, collaborations, outreach events, and workshops. Founded in 2006 by its director Bill Ryan, the ensemble not only prepares students for careers that include contemporary music, but helps them to become exceptional educators, advocates, and leaders in the field.

The group has been profiled in numerous publications including Newsweek and the New York Times, and featured on NPR’s Weekend Edition, All Things Considered, WNYC's Radiolab, and Performance Today.Their albums have been named to year-end best release lists by the New York Times, NPR, WashingtonPost, LA Weekly, Time Out Chicago, and many others. Their recordings have appeared in film and television shows on MTV, Showtime, at over 75 film festivals around the world, and in movie theaters throughout the United States as part of the soundtrack to the 2015 film As I AM: The Life and Times of DJAM. Their album of Steve Reich’s Music for 18 Musicians spent eleven weeks on the Billboard charts and was named one of the top five classical recordings of the decade by WNYC.

The ensemble has completed six tours and performed at major cities and venues throughout the country including New York six times, Atlanta, Baltimore, Chicago, Cleveland, Colorado Springs, Detroit,Indianapolis, Milwaukee, Philadelphia, Washington DC, and at twenty national parks. With multiple awards from New Music U.S.A. and the National Endowment for the Arts, the ensemble has commissioned 80 compositions from such notable composers as Sarah Kirkland Snider, Rachel Grimes, Nico Muhly, Anna Clyne, and David Lang. Their 96 performance and music videos on YouTube are approaching two million views, all without the aid of a cat or Lady Gaga tune.

The Grand Valley State University New Music Ensemble is at the forefront of contemporary repertory groups, alongside other established groups including Kronos Quartet, Alarm Will Sound, So Percussion, Bang on a Can and Germany's Ensemble Modern.
--ALL ABOUT JAZZ

The Grand Valley State University New Music Ensemble - the band of Michigan undergraduates whose CD of Steve Reich's "Music for 18 Musicians" was the surprise new-music hit of 2007 - has struck again.
--SAN FRANCISCO CHRONICLE

The players of the Grand Valley ensemble play with giddy exuberance and energy, rhythmic drive and an exceptional tonal blend.
--DETROIT FREE PRESS

The members of Grand Valley State's ensemble play with a confident swing...To put it another way, these kids are a trip.
--NEWSWEEK

A hyper-propulsive and yet silkily beautiful, entrancing and utterly alive interpretation that more than holds its own.
--BILLBOARD

The Michigan musicians play with glistening precision, yet they also bring out the variously jubilant and wistful emotions beneath the surface of Reich's score. The result is a vibrant recording that deserves to leap from the new-music ghetto onto the mainstream charts.
--NEW YORKER

The New Music Ensemble is open to all instrumentalists and vocalists. For further information please visit the ensemble website at www.newmusicensemble.org


Page last modified September 27, 2022
Report a problem with this page