The goal of this Wind Clinic is to provide instruction to middle school/high school music students both individually and in a chamber music setting. Our focus will be on the instruments that comprise the standard wind quintet: flute-etc. We encourage participation by ensembles with any mix of these instruments or consort ensembles; Flute trios, horn quartets, etc.

The Clinic will allow preformed chamber groups a chance to perform, as well as participate in a masterclass with the GVSU Woodwind Quintet Faculty.  If a student does not have a preformed chamber group, the student will be assigned to one and will be provided music for the group to prepare for the masterclass. Students can also perform solo repertoire during the individual instrument masterclasses with applied faculty.

Learn more about the Woodwind Quintet. 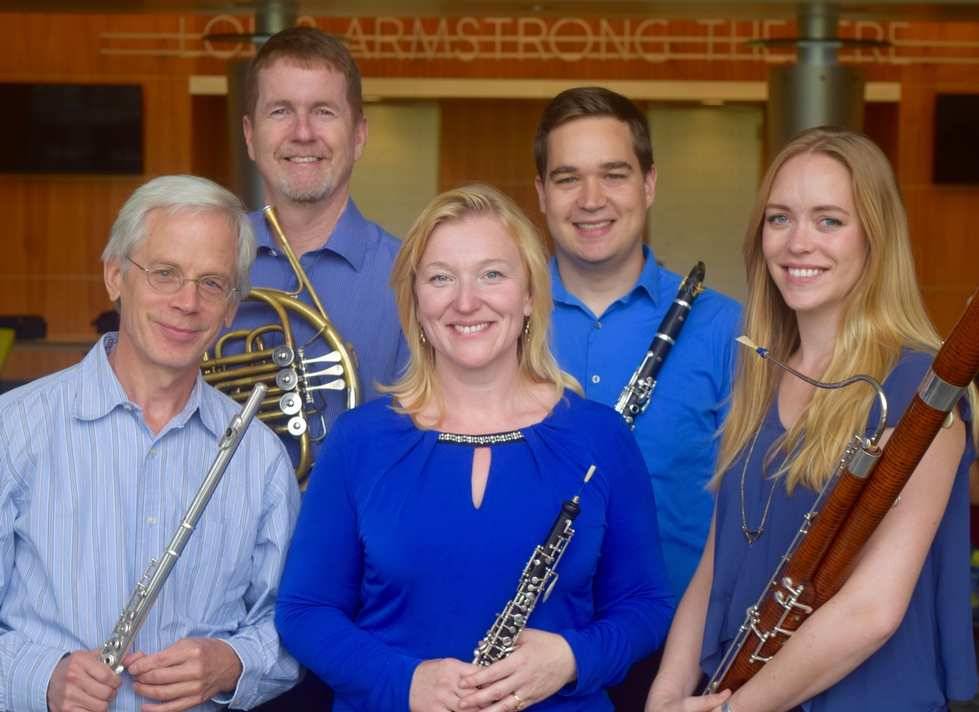 Christopher Kantner received his musical training at the Peabody Conservatory, the University of Michigan and S.U.N.Y. Stonybrook where his teachers were Bonnie Lake, Keith Bryan, Clement Borone, Samuel Baron and Albert Tipton. He studied most recently with Jacques Zoon of the Boston Symphony, working with him on reintroducing the wooden flute as a solo and orchestral medium. Since joining the Grand Rapids Symphony as Principal Flutist in 1976, Mr. Kantner has made numerous solo appearances with the orchestra, playing works of Bach, Mozart, Lucas Foss, Nielsen, Martin and Schoenfeld. His work as a soloist and chamber player is well known to Michigan audiences through his association with the Fontana Ensemble and as a charter member of Baroque and Beyond, the Mackinac Trio, and the Hartwick Duo. A Naumburg finalist, Mr. Kantner has been a fellow of the Aspen and Bach Aria Festivals. He has appeared with the Bach Aria Group in a cycle of the complete Brandenburg Concertos and as Principal Flutist and soloist with the Colorado Music Festival. Mr. Kantner's other solo appearances within Michigan include the Ann Arbor Symphony and Lansing's Renault Chamber Orchestra. He has held appointments on the faculties of Interlochen, Grand Valley State University and Michigan State University.

With a doctorate from the University of Illinois, Marlen Vavrikova has performed in Sarasota, Hot Springs, Banff, and Ostrava New Music festivals, the Society for Electro-Acoustic Music and International Double Reed Society conferences, and has been a soloist with the University of Illinois New Music Ensemble, the Baroque Artists of Champaign-Urbana, and the Janacek Chamber Orchestra. Besides receiving a stipend from the Czech Musical Fund and travel grants from the Ostrava City Council and the Civic Foundation, Marlen won the Presser Musical Award and the Kate Neal Kinley Musical Fellowship, and was awarded the Fellowship for the Creative and Performing Arts at the University of Illinois. A member of the Sarasota Opera Orchestra 2005, she has taught chamber music and oboe at the AMEROPA international festival in Prague and the Illinois Summer Youth Music Festival. Her primary teachers include Nancy Ambrose King, Richard Killmer, Daniel Stolper, and Josef Zidek. For a more detailed bio, you may visit her website at www.marlenvavrikova.com

Dr. Gary June is a clarinetist and educator based in Grand Rapids, Michigan. He holds teaching positions at both Saginaw Valley State University, where he is the Adjunct Professor of Clarinet, and Grand Valley State University, where he teaches clarinet and general music courses. As an orchestral musician, he has held the position of 2nd/Eb clarinet with the Sioux City Symphony Orchestra and was an Associate Member of the Civic Orchestra of Chicago. He has likewise regularly played with Sinfonia da Camera, the Champaign-Urbana Symphony Orchestra, and the Millikin-Decatur Symphony Orchestra. As a committed educator of primary and secondary-aged students, he spends summers teaching and playing at Blue Lake Fine Arts Camp and the Illinois Summer Youth Music Pre-College Clarinet Camp.

Victoria Olson was recently appointed Assistant Principal of the Grand Rapids Symphony by Maestro Marcelo Lehninger but is currently Acting Principal. Prior to joining the Grand Rapids Symphony, Ms. Olson has held positions with the Missouri Symphony, Symphony in C, and Colorado MahlerFest. In addition, she is frequently asked to substitute with the Baltimore Symphony Orchestra, Kansas City Symphony, Philadelphia Ballet, Harrisburg Symphony and more. Ms. Olson has attended numerous festivals such as Castleton Music Festival under the direction of Lorin Maazel, National Music Festival, Interlochen Arts Academy, where she was awarded the prestigious Emerson Scholarship, and the Aspen Music Festival as a New Horizons Fellow. An active soloist, Ms. Olson has appeared with the Concord Chamber Symphony where she performed the Gordon Jacob Concerto for Bassoon, and the Longmont Symphony Orchestra where she performed the Mozart Bassoon Concerto. Her Primary teachers include Daniel Matsukawa, Nancy Goeres, and Eric Stomberg.