History of the Center

A People's History of the LGBTQ Community in Grand Rapids

After many years of advocacy and campus organizing by students, faculty, and staff, the LGBT Resource Center opened its doors in the Kirkhof Center in 2008 under the direction of Dr. Milton E. Ford. The Center was created as a unit in the Division of Student Services. The opening was celebrated with a campus-wide event, “Three Centers: One Vision,” acknowledging the partnerships with the Women’s Center (now Center for Women and Gender Equity) and the Office of Multicultural Affairs. At the beginning of 2010, Dr. Ford returned to his full-time faculty status and then assistant director, Colette Seguin-Beighley, was promoted to director.

While the LGBT Resource Center is fairly new to campus, there is a lot of history behind how we got here!

If you have any additional information about the history of LGBT advocacy at Grand Valley, please contact us: [email protected]. 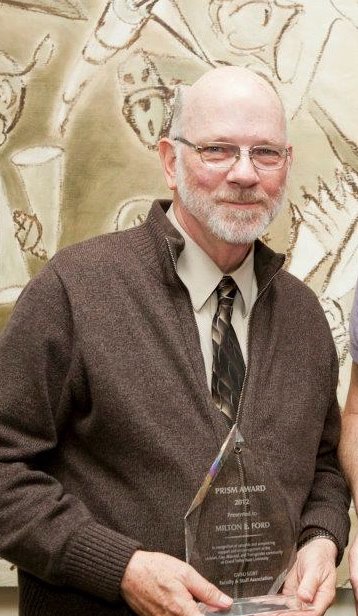 Beloved professor Milt Ford served as Founding Director of the LGBT Resource Center. His vision and dedication was instrumental in the formation of the Center. In April 2010, Milt returned to his full-time faculty position in Liberal Studies where he has served for nearly forty years. 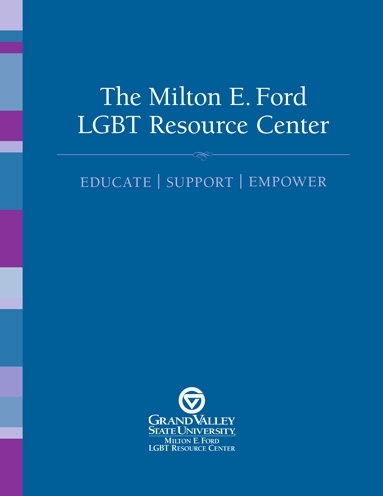 Click to view the Naming Ceremony booklet to learn more about the history of the center.

What follows is the history of Allies & Advocates at Grand Valley State University. While the authors have attempted to be as inclusive as possible, we are very open to addressing omissions, edits, or corrections. Those can be sent to the Milton E. Ford LGBT Resource Center at [email protected]

The 70’s were a time of intense social and political change. The Civil Rights Movement was in full swing, as was the Women’s Movement and the Sexual Revolution. The Vietnam War was coming to a climax, and a President was being impeached. GVS very much reflected all of these trends. Lesbian faculty were out and active, especially in the alternative colleges, whereas the presence of out gay men was almost non-existent. There is a record of a student GLBT organization at GVS in 1971 called the Gay Alliance, which held a public bull session featuring “a real life homosexual.” (Lanthorn, 5/26/71, p. 4). This person spoke from behind a screen so as to protect his or her anonymity. Such was the climate here in the early 70’s.

The end of the 70’s saw the closure of William James, Thomas Jefferson, and College IV. A particularly hard and long economic recession took hold in the early 80’s, and the very viability of GVS was at stake. In 1982 GVS reorganized the various divisions into one college, and in 1987, GVS became GVSU, and by 1990, we had 10,000 students enrolled.

1991-92: Allies & Advocates was founded under the leadership of Gloria Tate, an African-American graduate student. Initially, the organization was conceived to establish a sense of presence and visibility so that GLB (as we were then known) students would feel safer and more supported. The membership was not public. A group of concerned staff and faculty from various departments at GVSU, including Allies & Advocates, travelled to Alma College to attend a conference on providing service and support to GLBT students. The conference provided GVSU staff with a wealth of ideas and training materials, out of which Allies & Advocates developed their signature training for staff and faculty, as well as the now ubiquitous Allies & Advocates door placard. Concurrently, Susan Mendoza conceived of a program called “Safe Harbor,” a training and sensitivity program for all students to address what was a hostile climate for GLB students living in the living centers. This program was carried out by Housing staff, beginning in November of 2001.

2001: Led by Gary Van Harn, members of Allies & Advocates established the GVSU LGBT Scholarship fund, as a positive response to the negative decision regarding Domestic Partner Benefits. Many staff and faculty had suspended their regular annual giving to the University as a result of this decision, and when the Scholarship was finally signed and approved, donations poured in to the fund, making it the single fastest growing scholarship at GVSU without a major donor or corporate sponsor. This scholarship also represented the first time the acronym “LGBT” ever showed up in print in an official University publication. The Household Program, as it is now known, which extended insurance benefits to the same-sex partners of GVSU faculty and staff, went into effect in September of 2008.

2006/2007: Chief Equity Officer Patricia Oldt made an outside consulting firm available to Allies & Advocates, which is reorganized and revitalized. The membership of Allies & Advocates becomes public information and is published on the web. The iconic Allies & Advocates door placard is redesigned, and a new mission statement is published: “Allies & Advocates works to foster a campus climate that is safe, supportive, respectful, affirming and empowering for the LGBT community by maintaining a visible network of trained and informed faculty and staff.” Allies & Advocates is still an all-volunteer organization with no budget. Core training group members often baked their own cookies and brownies to take to a training for the participants. Student Life, Housing, and the Bookstores were frequent supporters of Allies & Advocates, supplying food and drink and printed materials. Basic operating funds were provided to the organization by the Office of Inclusion and Equity for the last two years of its tenure.

2006: Allies & Advocates training is certified for COT (clerical/office/technical) development credit. A&A offers three training sessions per year, and the membership doubles in size to over 200.

2010: At the request of some fraternities and sororities, a specific Allies & Advocates training was created. Greek A&A was rolled out for the first time in January of 2010, and 419 students were trained in the following years. The program has now been tailored for all students, and training is ongoing.

2011: Sponsored by The College of Liberal Arts and Sciences and Allies & Advocates, Professor Laurel Westbrook led a Queer Theory seminar which was attended by almost two dozen faculty and staff. This gave rise to a study of Michael Foucault’s book, “The History of Sexuality.”

2013: Discussions are held about transferring the training function of Allies & Advocates to the Office of Inclusion & Equity. Training was assigned to the Milton E. Ford LGBT Resource Center, beginning in the fall of 2015.

2015: The three resource centers were reorganized under the umbrella of Inclusion & Equity. The Milton E. Ford LGBT Resource Center took over all training functions.

A People's History of the LGBTQ Community in Grand Rapids

Visit the Grand Rapids LGBTQ People's History Project website to view the feature-length documentary as well as archival material collected for this project.

View the GVSU specific portion of the film here.


Page last modified July 1, 2022
Report a problem with this page