Why Employees Love Working at GVSU

What is it like to work at Grand Valley State University? What brings people to the campus, and what encourages them to stay? Hear what our employees have to say. 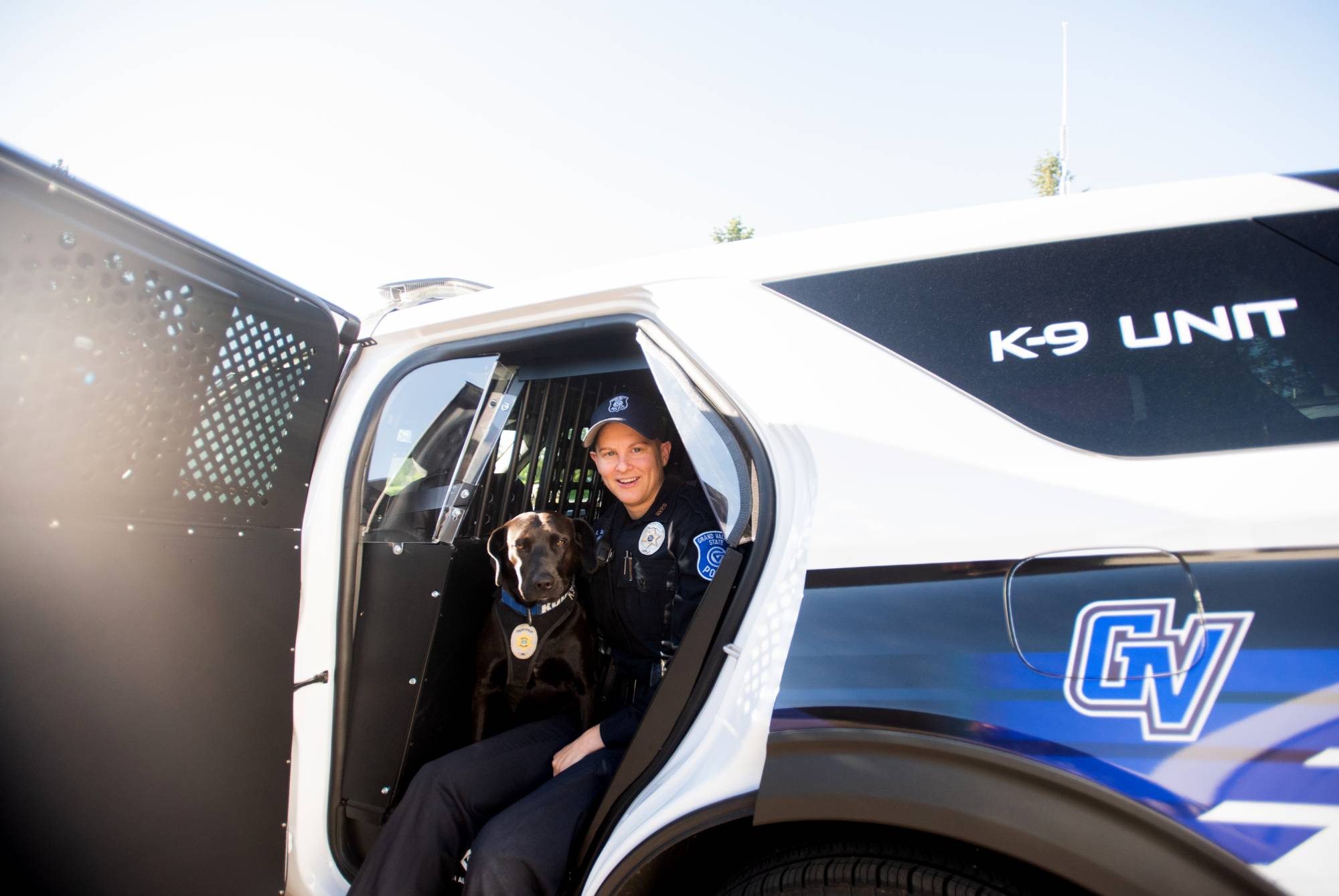 Officer Kelsey Sietsema had to wait through a lengthy proposal and training process before welcoming Koda, GVSU's K9 explosive detection dog, to the Laker family.

Sietsema started with the Department of Public Safety (DPS) as a cadet while she was an undergraduate student, and enjoyed making interpersonal connections with GVSU staff, as well as getting real-world experience. Sietsema went on to join the police academy in 2014 and became a full-time officer at GVSU shortly after. Several years later, Sietsema and her partner at the time, Andrew Hintz, created a proposal to bring a K9 to campus.

The idea originally sparked when Sietsema attended a training put on by Homeland Security where they posed the question, where are the vulnerabilities at GVSU? This is when the realization hit that neither GVSU nor the surrounding area had access to a K9 explosive detection dog. "If someone wanted to cause harm, GVSU is a potential target with the size and diversity of our community," Sietsema says.

Sietsema recalls receiving ample support from DPS leaders, specifically Captain Jeff Stoll and Chief Brandon DeHaan, when presenting this idea. She was able to conduct the research, which involved traveling to Michigan State University to learn more about their K9 program on campus. Once the proposal was approved, there was a position posted to be the canine handler. Sietsema was chosen for the position and for the past year and half, her and Koda have been inseparable.

Beyond the support from DeHaan and Stoll, Sietsema reflected on the support she feels from President Philomena V. Mantella and other university leaders. "President Mantella has sent us notes of appreciation, as well as wellness resources when there have been critical situations," she says. With this support, Sietsema says, "It [GVPD] feels like a family within the university. Why would I want to work anywhere else?" 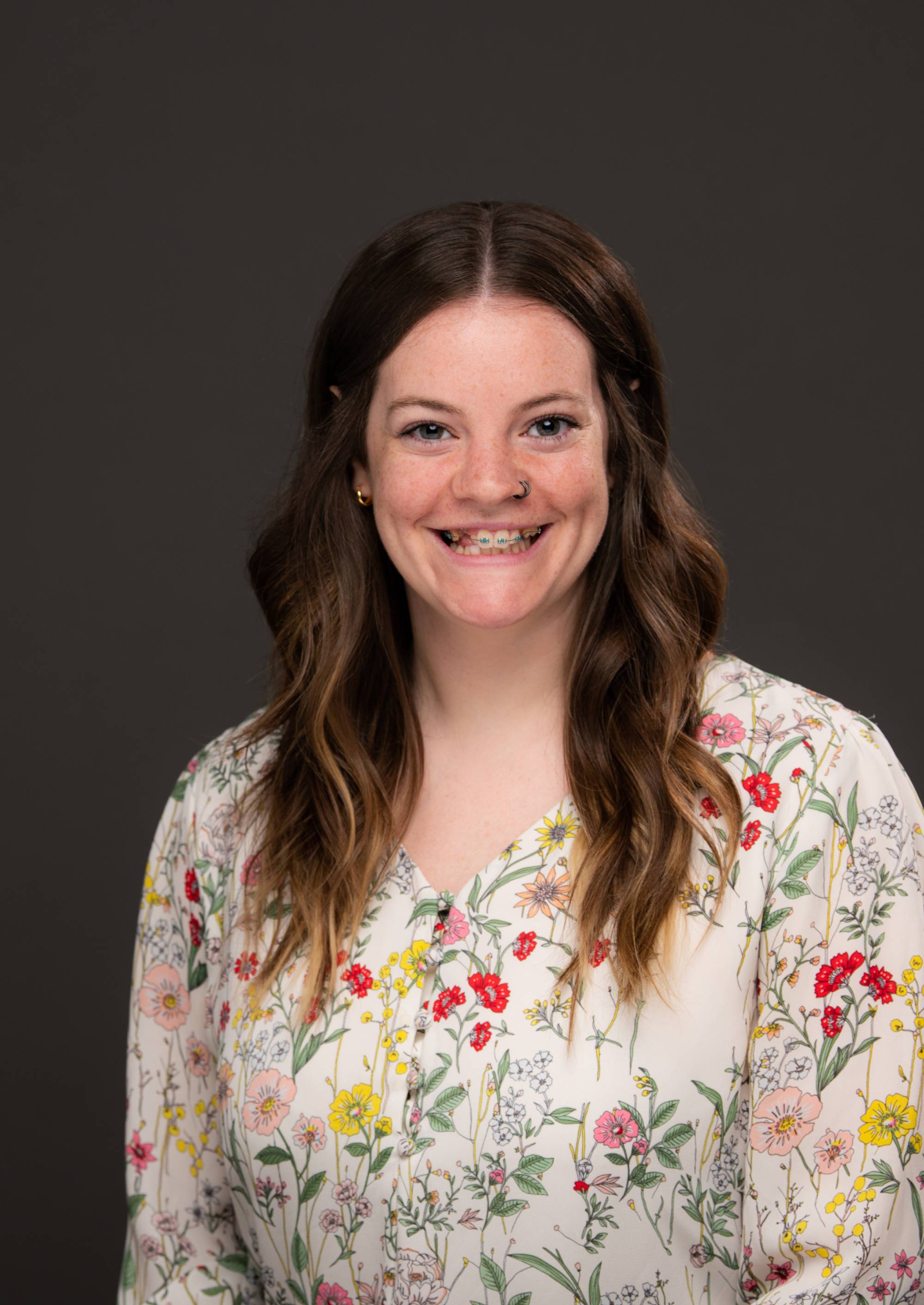 After earning a bachelor's degree in Integrative Studies from GVSU in 2015, MJ Creutz did not anticipate returning to Grand Valley. However, when she learned of an opening in GVSU Housing and Residence Life after completing her graduate work in Chicago, she was reminded of the time she spent at the institution and the relationships she had formed. “I know it’s cliché, but my undergrad experience changed my life. It transformed me and still inspires who I want to be,” Creutz recalled. “Grand Valley has a way of bringing alumni back to campus, and I’m happy to be a part of that.”

As an undergraduate student, Creutz took a course called Civil Discourse, the first section of that class at GVSU, and made a great bond with the professor, Lisa Perhamus, who is now the director for the Padnos/Sarosik Center for Civil Discourse (PSCCD). They remained in contact and when she decided to return to GVSU as a staff member, she reconnected with Perhamus. Now, Creutz serves on the advisory board for the PSCCD where she helps to plan the annual Civil Discourse Symposium, select endowed professors for the Civil Discourse class and more. Additionally, Creutz and Perhamus have partnered to facilitate a program called Anti-Racism, White Consciousness through the Inclusion and Equity Institute.

Creutz values and attributes much of her success to the connections she has made at GVSU. With her most recent role as the assistant director for Title IX, Creutz is thankful to have built meaningful relationships with students, faculty and staff across campus over the years. “Investing in these relationships means so much in my current role; Title IX is an intimidating office to be involved with from many angles,” she reflects. “Nothing can replace the value of relationships you’ve built.” 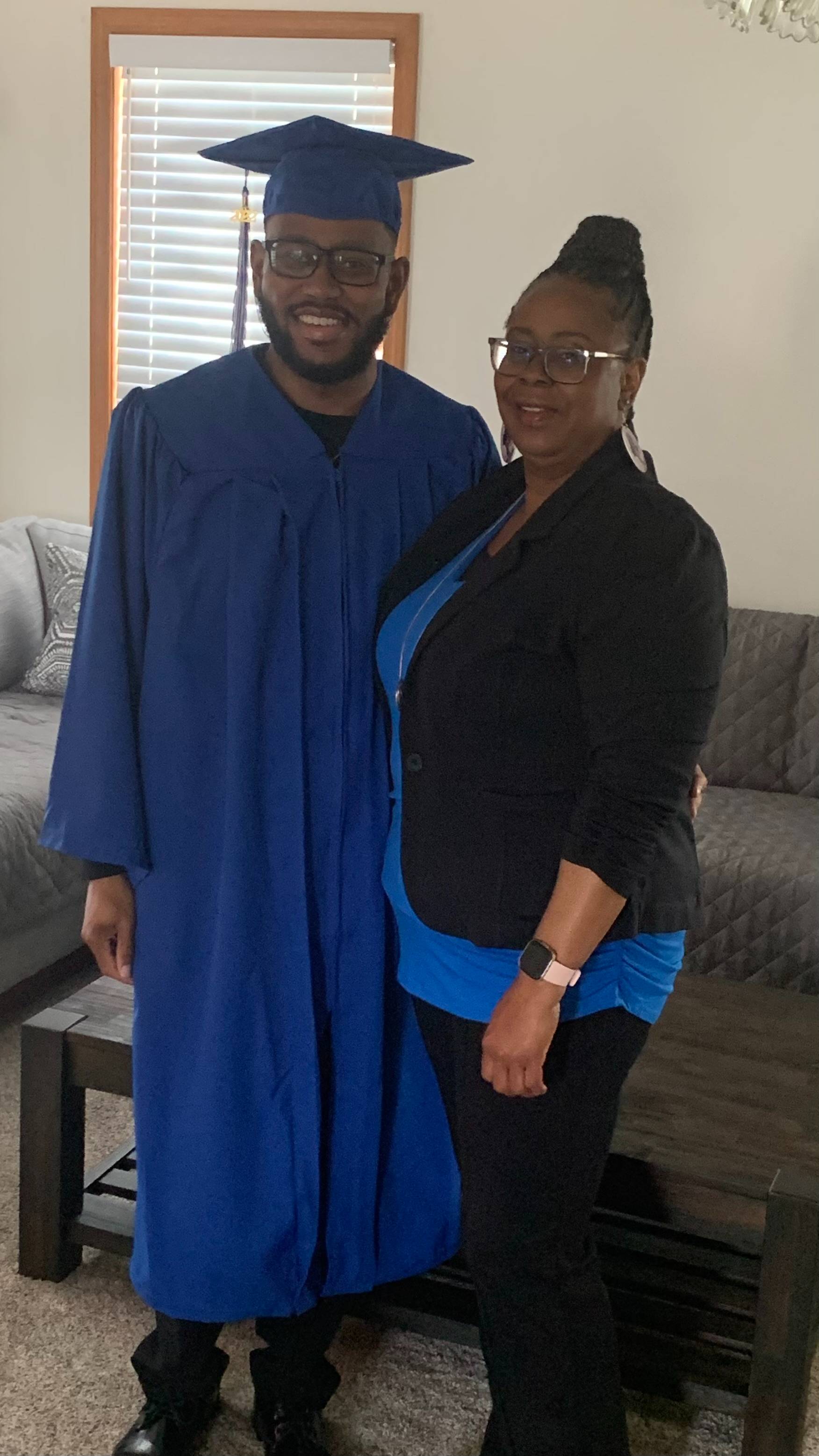 After being out of the classroom for over 20 years, returning to school in 2009 was unnerving for Tina Lee. As a single mother caring for a 9-year-old, she knew she wanted to finish her education, but certainly questioned her chances of success. Thirteen years ago, adult learning was not often an area of focus in higher education, making it an intimidating journey.

However, Lee was immediately met with support and encouragement from GVSU faculty. In one of her first courses back in the classroom, Lee recalls Professor David Bair telling her how much he appreciated having her in class to provide an adult perspective. Hearing this gave her a sense of belonging and encouragement. In addition to Professor Bair, Lee remembers many faculty members going out of their way to support her in her studies: Professor Gerald Shoultz in statistics, Professor Charles Hogg in philosophy, and Professor Emeritus Judy Whipps, to name a few. Lee was able to obtain her bachelor’s degree in liberal studies in 2015 with a 3.5 GPA.

While the faculty members along her journey kept Lee motivated, one of the main reasons for her return to school was her son, Daniel. “I wanted him to know that whatever his goals are, they can be achieved no matter when and how long they take,” Lee says. As Daniel graduated from GVSU in April 2022 with a bachelor’s degree in sport management, he reminisced on watching his mom work through her studies as he grew up and knew that if she could do it, he could too. 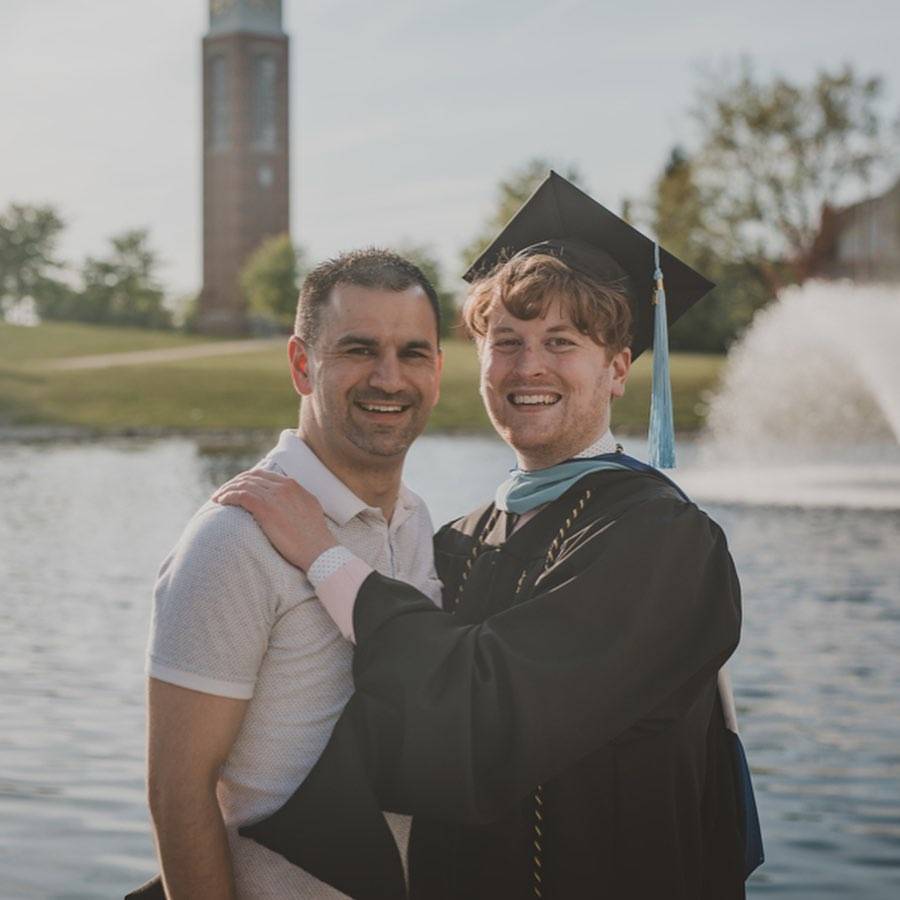 When Luke Madden started with GVSU Records and Registration in 2018, he faced not only the challenge of navigating a new job, but also debilitating anxiety and depression. And while a global pandemic may have further tested Madden’s mental health, he has continuously been learning ways to manage his struggles, with much credit to his first supervisor who offered him the flexibility to do so.

Through the peaks of COVID, Madden said that the practice of mindfulness and learning what to control within oneself was crucial. He actively participated in a "Mindfulness in Higher Education" group led by Karen Gipson, a faculty member in the Physics Department. Gipson taught fellow faculty and staff members how to incorporate mindfulness at work and in the classroom through reading the book The Mindful Twenty-Something: Life Skills to Handle Stress...And Everything Else by Holly Rogers. Much before COVID, Madden had been learning about resilience, mindfulness and effective communication through presentations given by Elisa Salazar, now the employee ombuds and previously the work life consultant in Human Resources.

Madden also recently obtained his master’s degree in education and focused his studies on mental health and mindfulness practices in higher education. Through personal experiences and continuous learning, Madden has been able to better support students. “Students are more receptive when you are able to relate, empathize, and can help them deescalate any overwhelming feelings,” he said.

During his time at Grand Valley, Madden has been working to give back to the university community through co-creating the GVSU Mental Health and Well-Being Index, spreading mental health awareness, and advocating for students and employees alike. Madden recognizes the progress being made at GVSU and is appreciative of those in the Laker community who have begun to create a nurturing and safe space to talk about mental health. 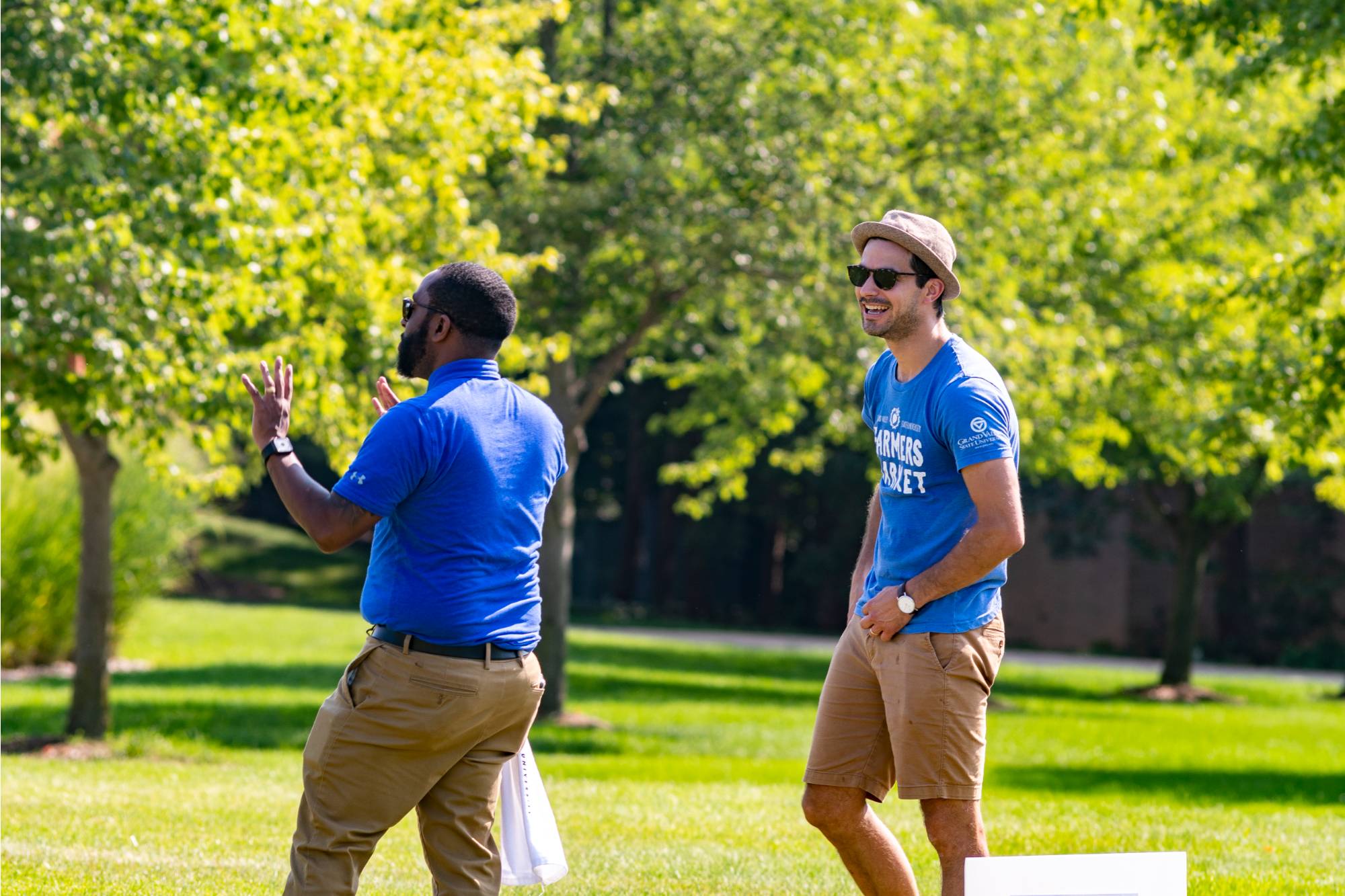 After so many in-person events were canceled due to the pandemic, Alex Priebe came up with the idea to coordinate a cornhole tournament on campus. “I missed those opportunities to connect with colleagues from across campus over fun, shared activities, especially outside in the summer,” he said. “At the same time, I was working in Brooks College and we had just created our own custom cornhole boards. My teammate, Aubrey Dull, and I had the idea to start the GVSU Cornhole Tournament as a fun, safe way to bring folks together to build community and connection across campus.”

Once the tournament was in motion, Priebe received support from all over the university. “The Web Team gave us a URL and space to create a webpage. The Human Resources office helped us with organization, communications, and their student designer created graphics. Event Services helped with the location and supplies. Athletics lent us their cornhole boards, as did many colleagues from across campus,” Priebe said. “It was a campus-wide team effort and so fun to see it come together to make something new happen. The best part was hanging out with colleagues from across campus, meeting new faculty and staff members, laughing, sweating (it was nearly 90 degrees that day!) and playing a backyard game together.”

The way the tournament came together nicely illustrates Priebe’s experience at GVSU, which he says is all about the wonderful people and supportive community we have here. In both roles he has worked at on campus, Priebe said, “I’ve felt so supported, encouraged, and cared for. And beyond my team, whenever I reach out to another department for help, someone is always there to show me the way and share their knowledge and resources. If that weren’t true, there’s no way we could have pulled off the Cornhole Tournament. The longer I’m here, the more people I get to know, the more grateful I am to be a Laker. GVSU is such a special place, and I feel lucky to get work here each day.”

Learn more about the second GVSU Cornhole Tournament, taking place on May 19. The first 16 teams are already filled up. Join the waitlist so we can expand the tournament! 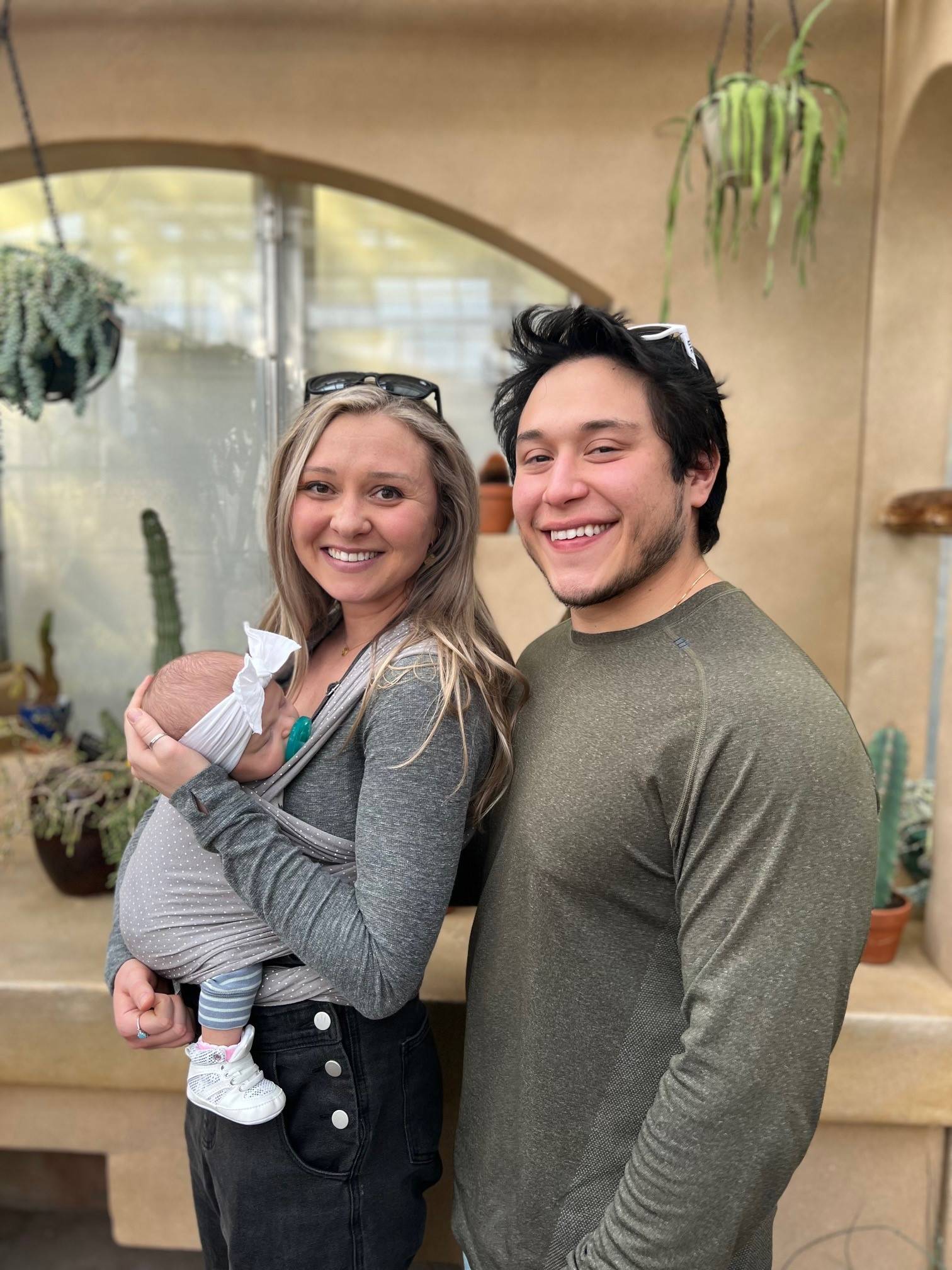 Doug Ayers, simulation coordinator at the GVSU Simulation Center, and his wife Danielle were blessed with their first child, Aria, this past winter. Thanks to GVSU's updated parental leave policy, Doug was able to spend ample amount of time with Aria and Danielle. "When I discovered GVSU updated the parental leave, I was overjoyed," he said. "There is a growing body of research surrounding the father-infant dyad and the long-term benefits over the child's life. The extended leave allowed me to establish an incredible bond with my newborn daughter. I will never forget the memories of being fully present for the first two months of her life."

Additionally, Doug shared, "Being at home throughout the day allowed me to better support my wife with sleep, meal prep, and self-care. I was able to attend doctor and lactation consultation visits with my wife to work through feeding difficulties with our newborn. I feel empowered as a new father because of the time I spent with my family. I can confidently say that I used the paternal leave to the fullest, making the transition into parenthood less stressful than anticipated. Thank you again for implementing this change!" 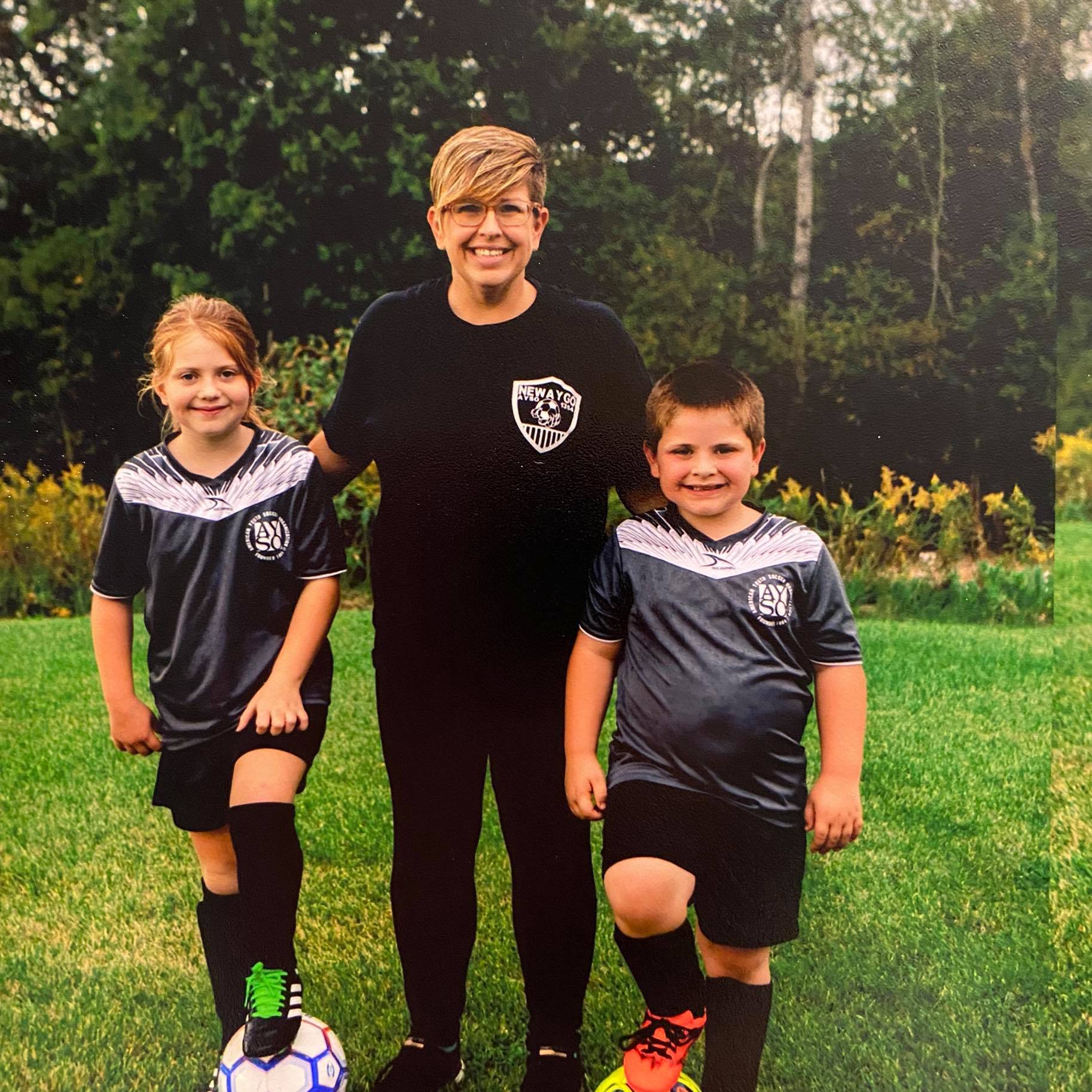 "I'm the mother of two amazing children. They are 9 and 7. Being a working mother has its challenges. The challenges of a work/life balance, of coaching sports to being home to help with homework, to missing first steps but being there for the first crush. Balancing that is so difficult. One of my children is medically complex. He requires medical treatments weekly. He requires at-home care related to his diseases or appointments with doctors in other states, extra phone calls during the day to doctors or school nurses, and 504 meetings with school. These extras are things most employers don't anticipate when hiring someone.

Be that employer, that boss, that leader who understands this possibility. Be the leader that puts family first and allows the extra phone call or the need to drop everything to race to their child. Being the employer or boss that recognizes this will ensure your employee will give you and your organization even more.

A workplace that respects my needs as a mother will get even more from me; I will be loyal and give my all every chance I have. I'm blessed to have this now and I certainly don't take it for granted. Last Friday, I took him to Chicago, and didn't once have to worry about work."


Page last modified November 10, 2022
Report a problem with this page