Permanent link for Busy Weekend for the Laker Navy on April 19, 2021

This past weekend saw the GVSU Rowing Team accumulate a total of 68,000m on the water in two days! On Saturday, the second installment of the intersquad races was held at the proving grounds, a reservoir of still water located downstream of our boathouse. Still water allows for the truest measurement of rowing speed, and our team capitalized on that by showing off some great racing! Even after an intense day, many of our athletes still wanted to be on the water - so they took it upon themselves to make the trek following the river all the way to Grand Haven on Sunday morning!

Saturday's racing saw some very close finishes and exciting results. After a brief fog delay in the morning, the sun broke through; with the springtime weather warming up the water, the coach has given the all-clear for athletes to row some smaller boats once again. A great variety of events were raced this weekend, including double and single sculls! Once launched, these crews rowed to the start buoy and lined up bow-to-bow for a 1500m sprint. At the sound of the coach's "Attention - Row!" athletes sprang into action, fighting tooth and nail to get their boat across the finish line first.

The first race of the day was taken by Team Haley's Varsity 4- with a time of 5:38.1, followed by team Eddie in second place. Team Haley's Novice 4+ also took first in the next race, with team Melissa coming in next about 15 seconds later. Team Melissa's crews went on to win the next few events: the men's 2x, women's 2x, and the women's 4+. Up next came the men's 4+, the closest race and highlight of the day! Team Melissa's crew made it to the finish line first, trailed by the others within 10 seconds. Team Jaydon, Eddie, and Haley were the 2nd, 3rd, and 4th place crews respectively, all finishing within 3 seconds of each other and staying in contact with the other boats throughout the entire race. The mixed 8+ event came next, another very exciting race! Team Haley finished 2.5 seconds ahead of Team Melissa's crew who were closely followed by Team Jaydon's. Athletes from the 8+s said that the race was a tough but rewarding one - everyone gave their absolute best effort, and the top 3 crews were bowball to bowball during the majority of the race.

After the 1500m races came the real fun - 500m dashes! A shorter distance means the intensity gets increased that much more, really allowing the athletes to show off the speed they have worked so hard to build. Jasper Lee, a talented freshman from team Melissa, took first place in the men's 1x, closely followed by his competitors from the other teams. Team Melissa also took 1st place in the Varsity 2x, with the powerhouse upperclassmen duo of e-board members McKenzie Sandel and Jacob Stone. Sophomore Isabel Albaitis of team Melissa took the women's 1x by less than a second, with the rest of her opponents finishing within 5 seconds! The mixed 8+ dash was the last event of the afternoon, a close race between all 4 crews that went to team Jaydon. Total points from the day put Team Melissa with 55.5, Team Haley with 50, Team Jaydon with 45.5, and Team Eddie with 43. The running total for the spring season now stands at Team Melissa with 98.5, Team Haley with 82, Team Eddie with 77, and Team Jaydon with 76.5.

With some tough first places under their belt, Team Haley had a good weekend. Captain Haley speaks about her team, saying "I am really proud of how we did at this weekend's intersquad race! The prior regatta was a little rough because we only had 85% of our team there. But this past weekend, despite having some equipment issues with our boats, we were able to pull through on a couple of races and win some first places. It just goes to show that determination and perseverance really play into this sport. I am feeling pretty confident in this group, and we are planning for another great regatta this next weekend!"

On Sunday morning, 27 of our athletes rowed to Grand Haven. Launching from the boathouse, the three 8+'s rowed downstream, traveling past the proving grounds where we had raced the day prior, to Spring Lake, through the Grand Haven channel, and finally to the Lake Michigan pier. The journey took about 4.5 hours and totaled in at nearly 30 miles - over a marathon. Athletes spent the time enjoying the new scenery the river had to offer, listening to music as their coxswain DJ-ed, and even playing Family Feud! Afterward, the team went to get ice cream to refuel and celebrate their accomplishment. Proud of the athletes, Coach Dan states that there are not many people in the sport who can say they've done these types of things. After a long weekend full of rowing, the athletes went home to rest and recharge for our next day of racing on 4/17!

Posted on Permanent link for Busy Weekend for the Laker Navy on April 19, 2021 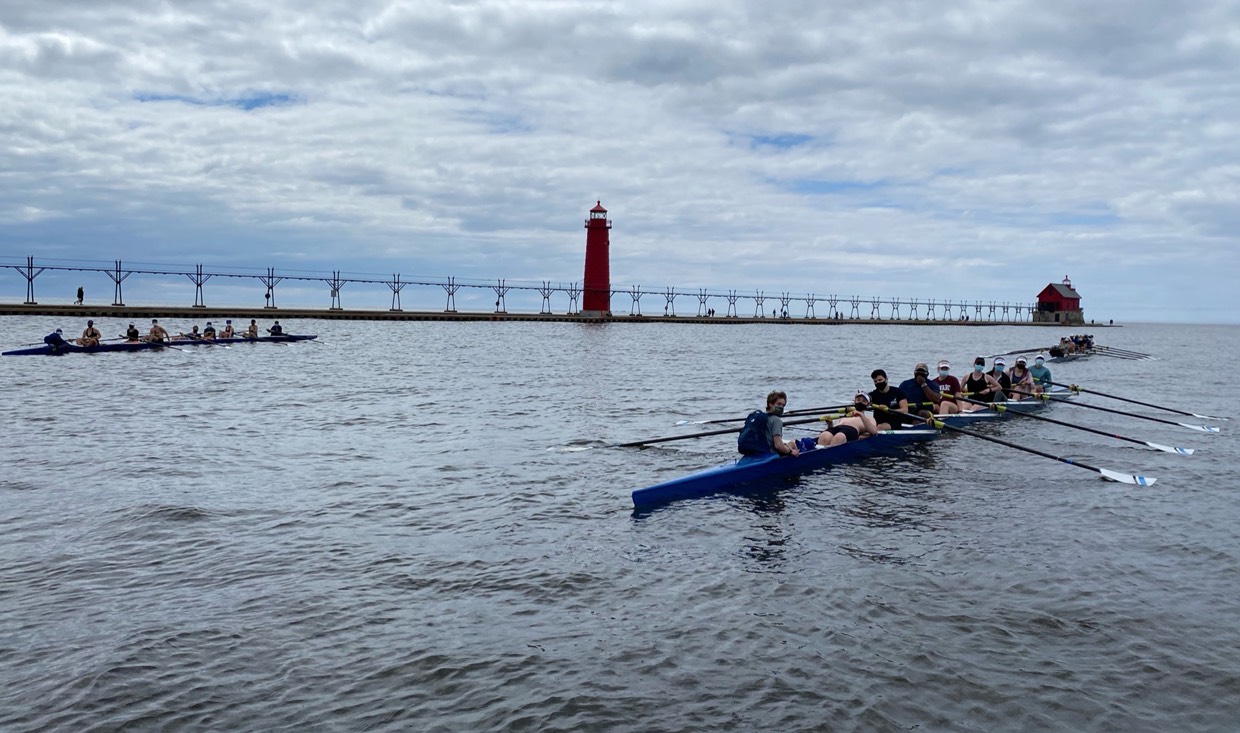 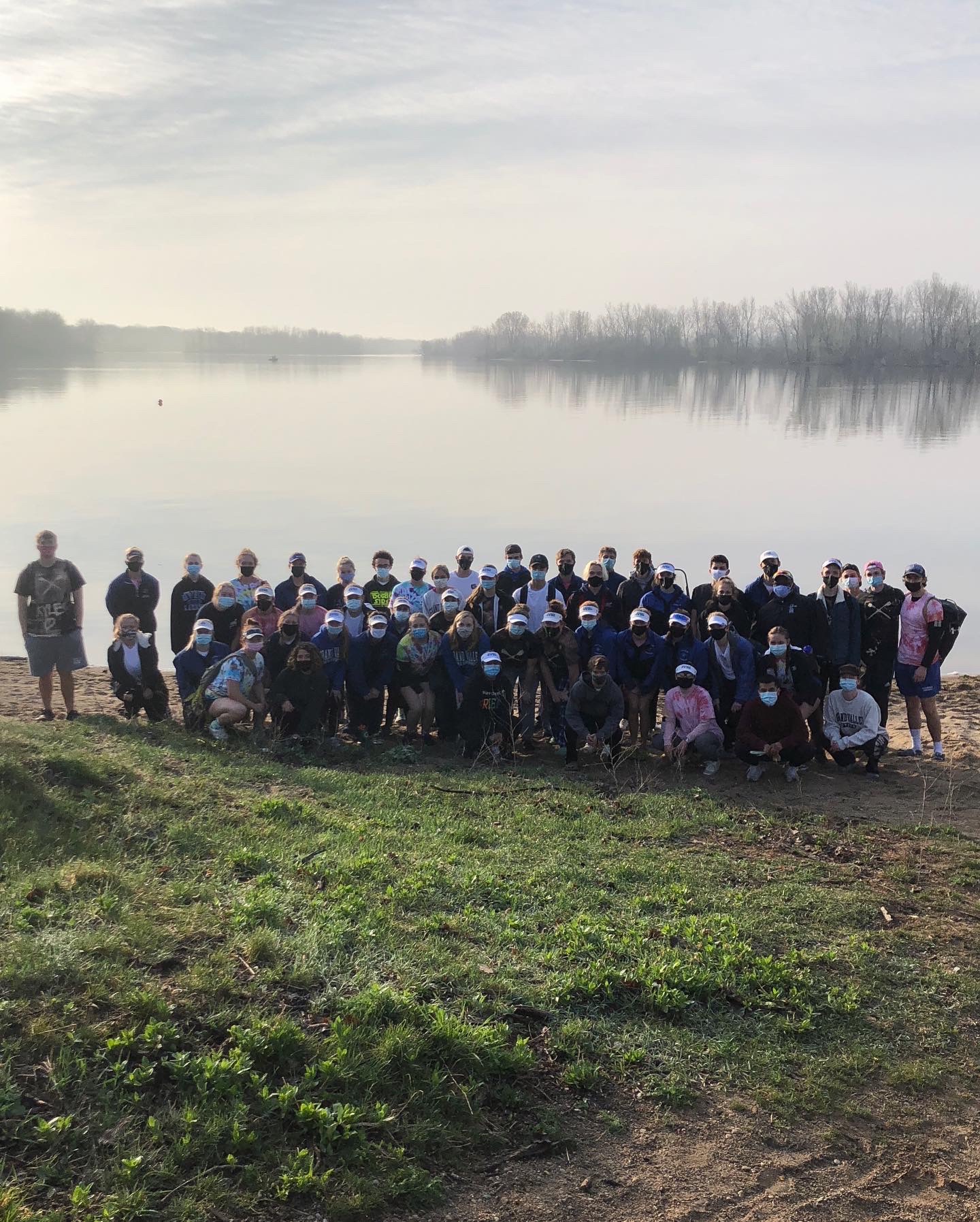 Posted on Permanent link for Busy Weekend for the Laker Navy on April 19, 2021

Page last modified April 19, 2021
Report a problem with this page