Today marks our last full day in Clemson! We started off the morning as normal with a quick brekkie in the hotel, and then we headed out to the water. For this morning’s practice, my boat did a couple stationary drills and then some cat 6 work by 6s and 8s. You could tell that we were all a little tired from a full week of training, but we worked together and were able to take some good strokes nevertheless.

After practice, some of my teammates and I went to this local restaurant called Sully’s Steamers. They served warm bagel sandwiches and they were delicious! Once we rested at the hotel for a little while, some teammates and I made an excursion to the local goodwill. We were on the hunt for some graphic t-shirts to cut into muscle tees and were very successful!

Later, we had our last evening practice for the trip and worked on our start sequence and took our iconic annual team picture! Then, we headed to the dining hall and had our last dinner of the trip. I changed it up a bit and sat with the novice men and ended up having some quality conversations with them! Once we arrived back at the hotel, I hung out with some friends, called my family to check in, and got my stuff all packed up. Soon, I’ll go to bed and be all rested up for a fun little scrimmage in the morning. All in all, it was a fun last full day in South Carolina! :)

You may hear many different preferences, but, personally, any day on the water is automatically better than if we weren’t. Today started off quite sluggish in the novice 8. I was in 6 seat for all of the morning practice which was one long steady state row. We started with a long and slow stroke rate of 18 spm for close to 10,000 meters before we decided to turn around. At our turn around, there was a small waterfall tucked away in a little cove. We sat there for about 10 minutes talking about technical stuff. After our talk, we picked it back up on our way back to the dock. Rowing by all 8, we rowed for about 4000 meters before switching in a new bow pair. After the switch, Coach Kyle had us try out some starts to prepare for Saturday’s race against Clemson. Then we returned to a light steady state to get us back to the dock to end the morning practice.

After the morning practice, many of the vans went into the campus area for lunch and some shopping. I, however, was quite tired and in need of rest, so I got in the van that would return back to the hotel. Once I got back to my room, I took a short nap to catch up on some sleep. After my nap, I went back down to the hotel lobby where I met up with Carlos and Simon. We decided to take a short walk down the road to a common fast food restaurant in the area called Bojangles which, like most restaurants around here, sells lots of chicken. After ordering, we all decided that we needed to try some of their legendary iced tea which turned out to be pretty good, but like most sweet tea was a little bit of tea and a lot of sugar. After we finished eating, we returned to the hotel where we started a game of Uno and played until it was time to leave for the afternoon practice.

The afternoon practice today consisted of a much better vibe and some race prep for tomorrow. Line ups were the same as the lineup from the morning practice, post-switch. We started with some swing picks by boat halves into full strokes which was followed by full boat rowing. After a little bit, we stopped and had our talk about technique and the different things each rower needed to work on. After a short talk, it was time to dial it in and work on our starting sequence. We proceeded to work on our starts and the following few strokes. After a few of those, we did a start followed by 2ish minutes of race pace rowing. After that we spun around to start our return to the docks. We did another one of the starts with 2 minutes at race pace followed by some steady state and some rev ups scattered here and there. Once we were nearing the docks, it was time to take our team spring break photo. We struggled a bit to get each separate boat close enough to get us all in one picture, but once together, we all stood in our seats to strike a pose for the picture. Once that was finished, we pushed apart and headed for the docks. Once on land, we strapped down our boats and had our team talk. We hit a break down and departed for dinner, minds set foremost on food with the race day vibes building as we come closer and closer to our first races of the spring season.

Today marks our last full day in Clemson. I started my morning out awaking to the sound of Buckwild playing as me and my roommates’ 6:30 am alarm. Having a fun alarm got me up and moving faster than normal, and I found myself at breakfast a little earlier than normal which was nice. At breakfast, I had scrambled eggs and a muffin with orange juice. This was just enough to get me through practice. I wanted to be nice and hungry for later because my van had plans for lunch.

The novice women and I started our 8 am practice like any other one with a quick warm up to stretch out our bodies before hopping on the water. The weather was decent enough this morning once we got out and moving. It was kind of chilly, but at least it wasn’t raining which I was happy about. It wasn’t bad, especially because we were rowing most of practice and were able to keep warm. The drills we worked included cut the cake drills and pausing at 1/2 slide, ¾ slide, and at bodies over. Pausing at each of these parts of slide was very helpful, and I feel like it helped us novice women to better understand when in our slide to start to feather our blades and raise our hands into the finish as we got to full compression. Doing these drills while rowing also helped me to better apply these skills to continuous rowing, so I really liked drilling this way.

After practice was over, my van loaded up and headed out to lunch in downtown Clemson. I got the yummiest bagel at Sully’s and also got an açai bowl at Cocobowlz. Sitting around outside with everyone eating and talking was fun, and it was a nice little moment in my day. Some vans also bought more Clemson apparel, and it was fun to see what cute shirts they’d bought. Once we all finished eating and talking, my van loaded up and went back to the hotel to rest up before our evening practice.

Our last official practice of the trip started at 3:30pm. The main focus of the practice was to get some reps in for starts because we have a scrimmage against Clemson tomorrow morning. To practice the starts, we rowed only moving our knees and elbows for the first four strokes doing half slide, half slide, 3/4 slide, and then full slide. Once completing those strokes, we did various amounts of full power strokes. After that, we had a little bit of time to try a drill coach Adam had mentioned a few times in the fall. It was a standing drill where we buried our blades at the catch and then pressed our bodies up to stand. The purpose of it was to feel suspension, and I definitely felt it. One by one we went down the boat to try to stand, and I was actually pretty alright at it! Finally, at the end of practice, we made our way over to take a team photo. It was lots of fun and really cool to see all of our boats link up and create a mega-boat of sorts. It was the most fun practice of the week in my opinion, and it was great having a practice where we got so much done but also had lots of fun doing it.

When the pictures were done with, we all packed up our stuff and were off to dinner. For dinner I had chicken, rice and french fries. I also had a small bowl of chocolate ice cream. Dinner went pretty fast, and before I knew it, we were getting in the vans to go back to the hotel. Once we get to the hotel, we’ll be doing a game of Kahoot about team trivia which I’m looking forward to. Afterwards, my roommates and I also plan to make a music video with video star. I’m sure it’ll turn out very dorky, but it’ll be so much fun and I’m excited for it! 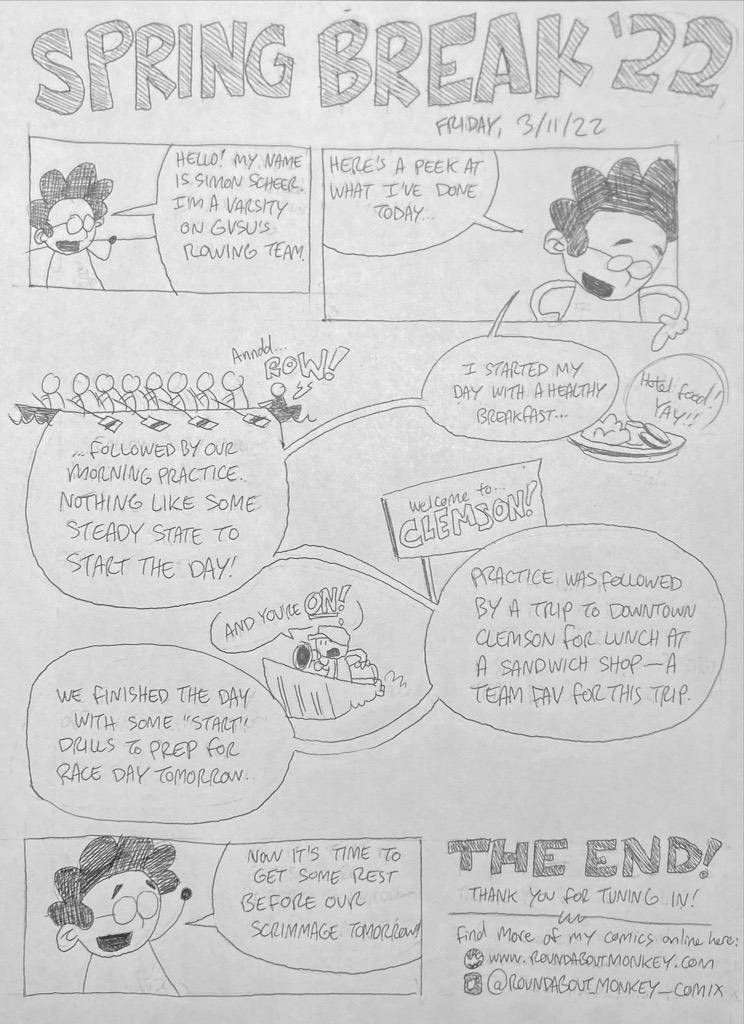 Page last modified March 14, 2022
Report a problem with this page