Permanent link for GVSU Club Softball takes the series against FSU 3-0 on November 10, 2021

The GVSU club softball team competed in their last fall season games against Ferris State University this past Sunday (11/7). GVSU went 3-0 in the tripleheader against the bulldogs. The scores were as follows: Game 1 (13-3), Game 2 (11-0), and Game 3 (15-0). Our player of the week was sophomore Emily Fontaine. Fontaine was 6/8 (.750) at the plate with five singles, a triple, and a walk. She played shortstop, third base, and even threw an inning on the mound, including one strikeout. She threw a combined no-hitter with our pitcher of the week freshman Bella Chinavare. Chinavare threw five strikeouts and allowed one walk in only three innings of pitching. GVSU finished their fall season going 11-1 in conference play and 15-3 overall. Currently, GVSU shares the Great Lakes East Conference title with Central Michigan University. GVSU’s first game back is March 27, 2021, with a home tripleheader against CMU for the conference title. Anchor Up!

Posted on Permanent link for GVSU Club Softball takes the series against FSU 3-0 on November 10, 2021 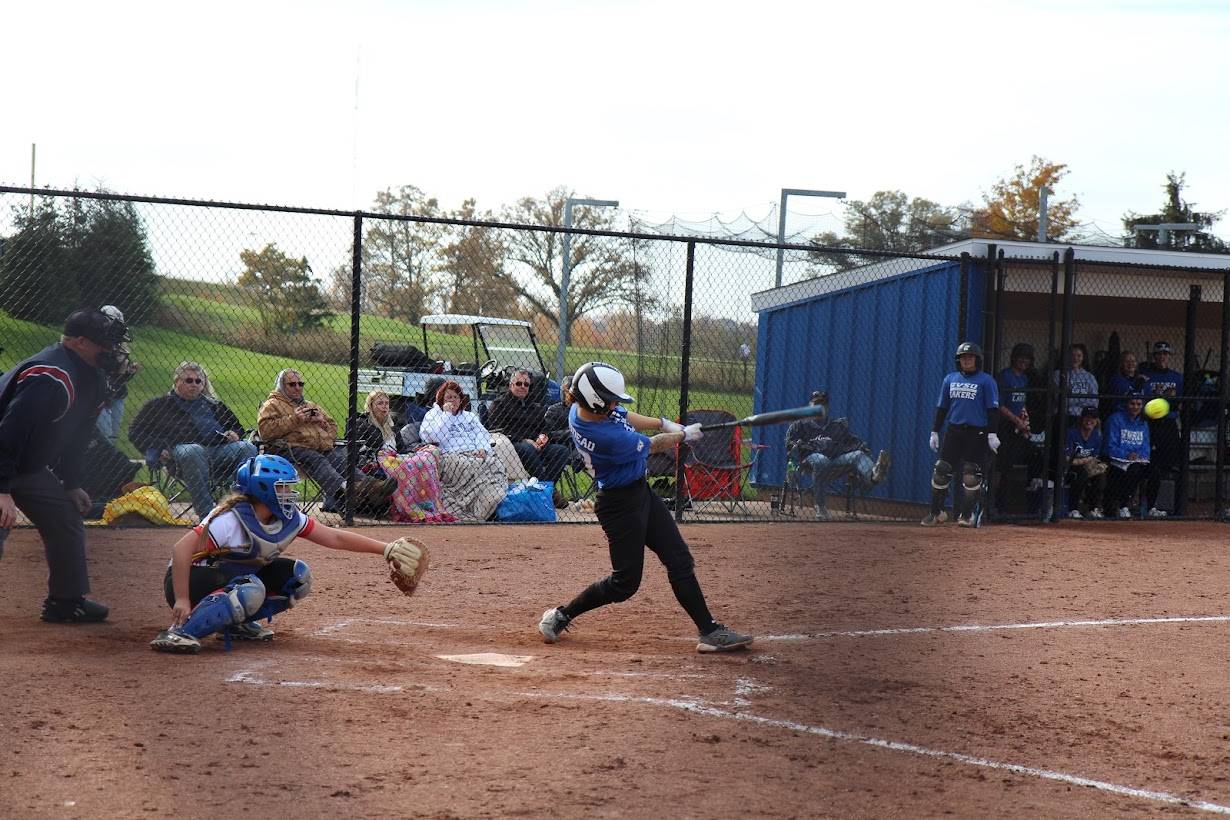 Taylor Trudeau crushes one to the outfield 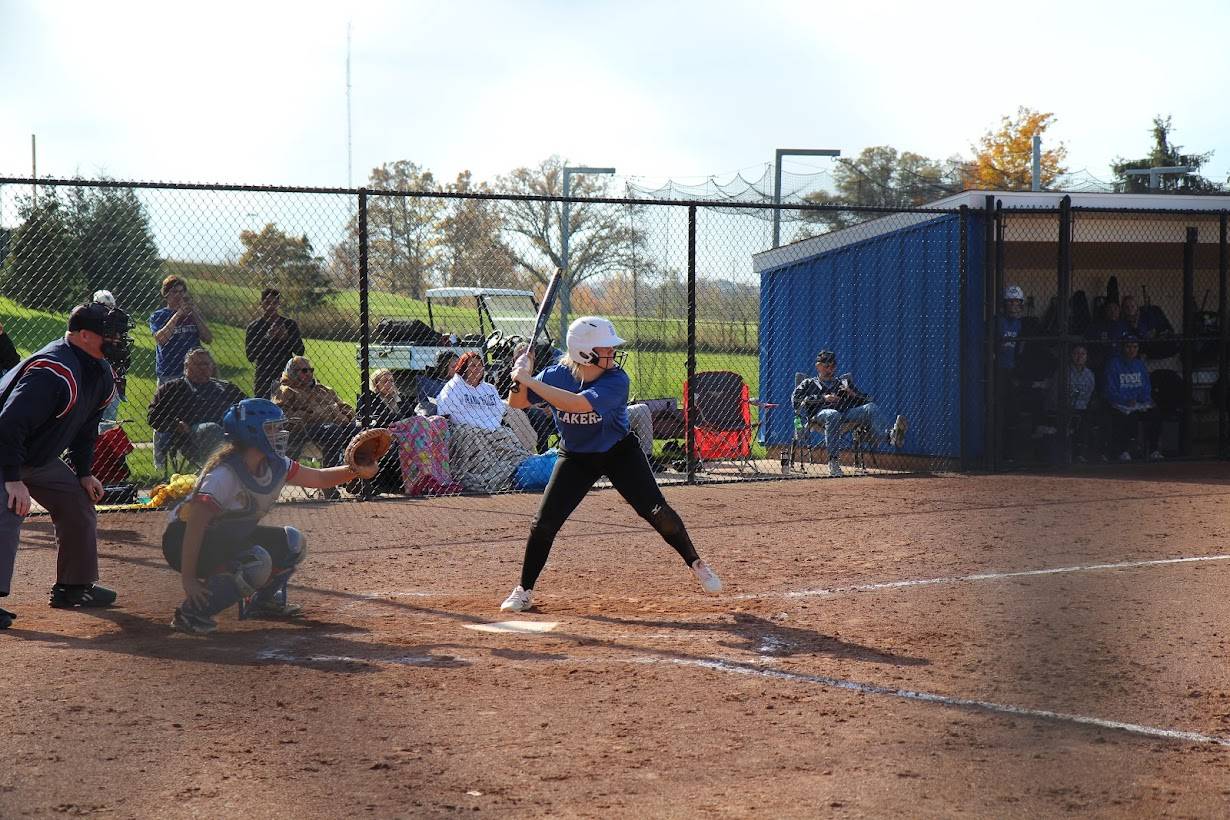 Emily Fontaine up to bat

Posted on Permanent link for GVSU Club Softball takes the series against FSU 3-0 on November 10, 2021

This past Sunday (10/17) the GVSU club softball traveled across the state to compete against Saginaw State University (SVSU). GVSU dominated in the field and at the plate defeating SVSU in a total of 14 innings. The game scores were as follows: Game 1 (W, 12-0) Game 2 (15-0) Game 3 (14-0). The team’s player of the week was junior Taylor Trudeau. Trudeau went 8-9 (0.888) at the plate including two doubles and a triple, caught for the second game, and even saw some time playing at shortstop. She had an excellent hitting day and each time she was in the box, she did her job. Trudeau scored four runs and had 8 RBIs. The team’s pitcher of the week was freshman Grace Odenbach. Odenbach had two complete shutouts in ten innings, striking out nine and allowing a total of four hits. She allowed zero walks and fielded four outs on the mound herself. The GVSU club team will take the field at home in a couple of weeks (11/7/21) against Ferris State for their final fall game of the semester. Anchor Up!

The GVSU club softball team played some big rivalry games on the Sunday (10/10) of the family weekend. The team faced Michigan State for three conference games after falling to them in the championship of the Indy Invitational tournament the weekend prior. GVSU won the overall series winning two of the games and losing one. The scores were as follows: Game 1 (W, 11-8) Game 2 (L, 2-11) Game 3 (W, 5-3). The team’s pitcher of the week was junior Emily Odenbach. Odenbach started both the first and third games against MSU, pitching a total of ten innings striking out two and walking only two batters. The team’s player of the week was senior Riley Wertz. Wertz went 5-7 (0.714) at the plate with four singles, a triple in her first at-bat, and a base reached on error. She also played right field for the first and third games and had a total of five catches for the day. The club softball team is on the road next Sunday (10/17) for three conference games against Saginaw Valley State University. Anchor Up!

This past weekend (Oct. 2&3) the GVSU club softball team competed at the Indy Invitational tournament in Elkhart, IN. The team went 2-1 in pool play facing the University of Michigan (L 0-2), Adrian College (W 6-5), and Western Michigan University (W 5-4). GVSU began bracket play facing Adrian College again, beating them 11-6 to move on to the semifinals against the University of Michigan. Timely hits, solid defense, and positive attitudes led the girls to a clutch win 4-2 over UofM and brought the team to the championship game. The final game was against Michigan State University and after a hard-fought battle, GVSU fell 2-4 against the Spartans, placing second overall in the tournament. Freshman Bella Chinavare was GVSU’s pitcher of the weekend, pitching twenty innings of the tournament with minimal walks and multiple clutch strikeouts. Junior Taylor Trudeau was GVSU’s player of the weekend going 9 for 14 at the plate. With a timely double against UofM in the semifinals, Trudeau drove in two runs to tie the score and keep the Lakers in the game. The club team looks forward to redemption against the MSU Spartans this Sunday (10/10) with three conference games at the GVSU ICA Softball Field.


Page last modified November 10, 2021
Report a problem with this page