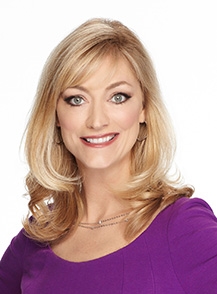 Angie Crouch, ’88, is an Emmy award winning journalist who reports for KNBC TV in Los Angeles. She has been recognized for her coverage of Barack Obama’s Inauguration, the death investigation of Michael Jackson, the earthquake in Haiti, and Hurricane Isaac in New Orleans.

Crouch has also received numerous awards for the weekly series Life Connected. In this series, she profiles people who have overcome adversity and are using their experiences to help others. Her stories have helped generate thousands of dollars in donations for local charities. She takes pride in being of service to the community, which she believes is the core purpose of her role as a broadcast news reporter.

Crouch laid the foundation for her 30-year career in journalism while still attending Grand Valley. Before earning her Bachelor of Science in broadcasting from Grand Valley in 1988, she worked as a news director and morning anchor at WKBZ Radio in her hometown of Muskegon, as well as a reporter for WGVU FM Public Radio for Grand Valley. Shortly after graduation, she then began working as a reporter at WOOD TV in Grand Rapids.

A move to Sacramento, California, then led Crouch to two years working for ABC NewsOne, doing as many as 35 live reports a day for ABC affiliates across the country. Her assignments included the Rodney King civil trial, the Northridge earthquake, and the OJ Simpson trial.

She has also been a reporter and anchor for KCAL TV out of Los Angeles where she reported underwater from a shark cage and jumped off a cliff with a paraglider, and for KNTV out of San Francisco where she covered the nation’s largest protests against the Iraq War and the city’s fight to legalize same sex marriage.

While Crouch enjoys reporting the news, her true love is humanitarian work. She spent a month living in a remote village in South Africa helping AIDS orphans. When their orphanage burned in a fire, she helped bring the children to America on a singing tour to raise funds to rebuild. She also traveled to Haiti after its earthquake and helped raise $250,000 for the victims.

Additionally, Crouch has served on the Board of Directors for LACER Afterschool Programs in Hollywood. With LACER standing for literacy, arts, culture, education, and recreation, the nonprofit connects youth with mentors who help engage them in these areas.

She has also been a writer and director for Greystone Production Company, creating hour-long programs for HGTV, the Travel Channel, and the Fine Living Network.

In 2018, Crouch received the Distinguished Alumni Award. The Grand Valley Alumni Association presents the annual award at April’s commencement. The award goes to an alumnus or alumna who excels in their chosen profession and reflects favorably upon themselves, their community, and the university.


Page last modified March 21, 2018
Report a problem with this page