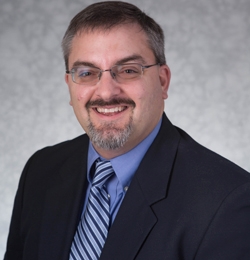 Brad Wallar is an associate professor in the Chemistry Department at Grand Valley State University.  He has been a member of the GVSU faculty since 2003.

Professor Wallar received his B.S. in Biology from the University of Michigan-Flint in 1993.  After six years of graduate school, he obtained his Ph.D. in Biochemistry, Molecular Biology, and Biophysics in 2000 from the University of Minnesota.  He then pursued further training in cancer biochemistry while completing a post-doctoral fellowship in the Cell Structure and Signal Integration Laboratory at the Van Andel Institute.

Students appreciate the significant time and effort that Wallar puts into their education, whether it is in the classroom, advising, or mentoring in their research projects.  Wallar’s interactions with his students go well beyond teaching scientific skills.  Many students have noted him as being a very influential person throughout their undergraduate career, and he continues to serve as an important mentor to some of his former students.

In addition to some internal funding from GVSU, Wallar has received external grants from the National Science Foundation and the National Institute of Health in order to support students through full-time research experiences.  As a result of this successful collaboration with his undergraduate researchers, they have published their work in peer-reviewed journals and have presented oral and poster presentations at numerous national and regional meetings.

Throughout his 12 years at GVSU, Wallar has also received the University Outstanding Teaching Award, Pew Teaching Excellence Award, Distinguished Undergraduate Mentor Award, and Professor of the Year by the GVSU Educational Support Program.

Aside from teaching biochemistry at all undergraduate levels, Wallar has also played a role in University service; most notably involving the promotion of faculty scholarship and undergraduate mentoring.  He served on the University Research and Development Committee for many years and was a member of the advisory board that helped to form the Center for Scholarly and Creative Excellence.  He also has contributed to other University functions, such as supervising an event at the Science Olympiad competition on the GVSU campus every year since 2004.

Dr. Wallar lives in Zeeland with his wife and three children and enjoys coaching softball, basketball, and baseball teams in his spare time.


Page last modified February 20, 2015
Report a problem with this page