A club was actually organized during the construction, planning, and recruiting stage of Grand Valley State College between 1962-1963. The College's 12 employees took part in several social activities: stag poker nights, a picnic, and dinner parties. The first Faculty Club president was H. Weldon Frase, who served vigorously as a mainstay and impelling force for the Club throughout the years since, even following his retirement from the College. 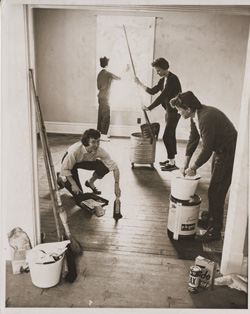 Volunteers clean a neighboring farmhouse that would serve as the first Allendale office for GVSC.

With encouragement from President James H. Zumberge, the GVSC Faculty Club was incorporated in 1963 for the purpose of purchasing a 105 acre parcel of land adjoining the Allendale Campus on the south, with the premise that this would be an ideal location for a future clubhouse. The acreage purchased by the Club included the site of the first permanent settlement in Ottawa County, Blendon Landing. An old farmhouse on the land was considered to use as a clubhouse, but subsequently, its deteriorated condition was assessed unsuitable.

Over the next 30 years, but not before some intense growing pains, Grand Valley State, now a University, continued to flourish, and most of the land was sold for the development of student housing and additional academic and office buildings. The Faculty Club however, continued to experience many trials and tribulations in its quest to develop the remaining land and build a notable clubhouse. A long-awaited breakthrough presented itself in 1990, resulting in a land trade agreement with GVSU in exchange for permanent room space in a proposed golf course clubhouse. The Club was renamed Grand Valley State University Club Inc. to restructure its legal integrity in ratifying this agreement. And in 1994, a prominent dream home became reality with the opening of The Meadows at GVSU clubhouse.

As was the goal of the original organization, the University Club today continues striving to enhance the lives of our members, their families and special friends through social, informational, and enrichment activities.