Located on the southern edge of what is now Grand Valley State University's riverfront property, Blendon Landing was a thriving settlement during the lumber era. Blendon was organized in 1854 and named for the Blendon Lumber Company. A logging train hauled timber eight miles from the pine forest to the landing for shipping. White pine and hardwoods were transported from here and used to manufacture ships, railroad cars and guns. Blendon's sawmill, logging operations and shipyard sustained a community of about 200 people in the early 1860s. The village located on a bluff contained a large boarding house, a general store, a schoolhouse, blacksmith shop, hotel, a saloon and many cabins. The sawmill burned in 1864, and by 1870, the railroad was abandoned. By 1912, Blendon was deserted. 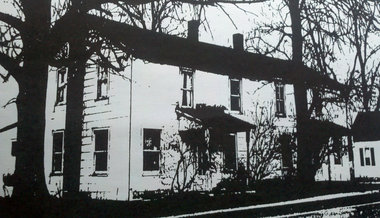 Gone now: Blendon Landing's hotel was relocated to the corner of 48th Avenue and Bauer Road where it stood until the 1970s, when it was destroyed by a fire.

While Grand Valley State College was in the construction, planning and recruiting stage which began in the summer of 1962, its eight employees were considered professional staff (Nancy Bryant, Philip Buchen, William Dempsey, Stephen Ford, Weldon Frase, Donald Lautenbach, George Potter, and James Zumberge). In early 1963, Ella Mae Braun, George Hundley, Kenneth VerBurg, and Helen Wong were added to the staff. Until the summer of 1963, this group took part in several social activities. There were stag poker nights, a picnic and dinner party.

The idea of forming a faculty club occurred when President Zumberge noted that 105 acres of land adjoining campus on the south (Blendon Landing property) was available at the original optioned price. It appeared that the college would not pick up this parcel. Since the option was due to expire shortly, action was necessary very soon. The staff decided this site would be a valuable asset to future faculty, and suggested that the faculty would want and need a faculty club, and the adjoining property would be an ideal location for a clubhouse. The group agreed after discussing merits of the land acquisition to form a corporation and club. The first official meeting of the Faculty Club was held on July 10, 1963 at 4520 Lake Michigan Drive in Allendale, MI. Officers elected for one-year terms were President H. Weldon Frase, Vice President George Potter, and Secretary-Treasurer Kenneth VerBurg. Following the Club's authorization, the officers secured a $28,475 loan from Union Bank, and the land was purchased from Mr. and Mrs. Andrew Reister. Individual members of the Club loaned the corporation sufficient money to manage the property purchase.

In August, a committee was appointed to examine the Reister house to assess its condition and suitability for a clubhouse. Due to deteriorating conditions, financial burden, and inadequacy for accommodating a rapidly growing faculty, Club members agreed to abandon plans for renovating the house. Arrangements were made with the Allendale Fire Department to have the building destroyed by burning. Over the next 30 years, the Faculty Club experienced many trials and tribulations in its quest to develop the land and build a notable clubhouse.

September 1963: Faculty Club hosts a social gathering for the pioneer class of students on the Crocker house lawn (among the buildings purchased with Blendon land [herein after referred to as the land]; also used as the first GVSC physical education facility).

Spring 1964: A 25 acre parcel of land sold to George Banta and Ronald Garlock to develop and build first campus student apartments (Grand Valley Apts). Sale included land contract agreement to use an apartment as a Faculty Club room. Due to poor construction and financial obligations, apartment project discontinued and replaced by a monthly payment from Mr. Garlock. A pathway easement from apartments to south edge of campus approved. Site committee continues exploring other ideas for development of a Club facility. 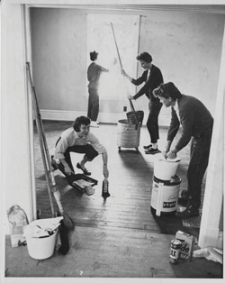 Volunteers clean the neighboring Crocker Farmhouse that served as the first Allendale office for GVSC and was considered for a rental by the Faculty Club in 1968.

The Club found this to be a decade of challenges and uncertainties. It was evident a clubhouse would crystallize the organization. But could we afford it? Would there be sufficient membership to sustain it? Who would manage it? Should dues be increased prior to building or wait until after the facility attracted more members? Questions were endless, but answers came slowly.

Spring 1970 - Winter 1972: Property value increased from $2,400 to $6,700. A communication to all faculty and professional staff solicited recommendations for schedule of events and achieving Club's building goals. Over this period, several notions for a clubhouse were discussed, but no concrete developments ensued.

Spring 1973 - Winter 1974: A proposed restructure of the dues and initiation fee, to be effective until construction completion of a clubhouse, was later found to be in violation of bylaws. Two amendments to bylaws concerning election of officers and removal of board members were approved. Board approved lifetime dues-free membership for retirees having maintained membership in-good standing for their final five years.

As GVSC continued to flourish, the Grand Valley Club found itself in an untimely quandary. But like the dawning of the Age of Aquarius, Club leaders embraced the spirit of its founders and forged onward. The 1978 property taxes were paid with loans from several board members who supplemented the depleted treasury. The COT employee group expressed no interest in previous membership drive, and no additional professional staff were recruited. As a result, the name was reinstated to the Faculty Club. Club's plight hangs in the balance.

January 1979 - March 1980: As no information is available for this period, it's uncertain whether records were just lost or the Club ceased to exist.

April 29, 1980: A message from the first president, Weldon Frase, to all faculty indicates that taxes are two years in arrears, the Club is in jeopardy of losing its property, and beckons Club members since 1976 to attend a call-to-action meeting.

A new day is dawning, and the journey begins! A long-awaited breakthrough for founding a permanent clubhouse is presented.

Fall 1990 - Winter 1992: Board invited to meet with Vice President VanSteeland concerning an idea for a potential clubhouse. It was proposed Club enter into a 70+ acre land-contract trade agreement with GVSU in exchange for space in a proposed golf course clubhouse. 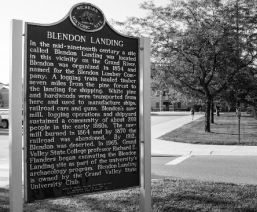 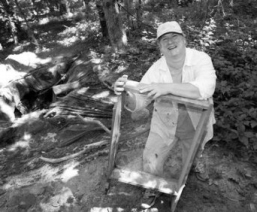 Following a year of meeting discussions, assessing structural and management concepts, and countless hours of developing legal terms and conditions, the proposal resolution was presented to the general membership. By a vote of 23 to 4, the resolution was passed. GVSU agreed that the Blendon Landing historic area would be preserved in perpetuity. The Club was renamed Grand Valley State University Club Inc. to restructure its legal integrity for ratifying this agreement. As the Club would be the holder of the liquor license, bylaws were amended to include an associate member class to accommodate liquor sales to non-member guests. Membership increased to 123 by 1992. Several amendments to the bylaws relative to the membership year and board elections, and Board indemnification and absences were approved.

Spring 1993 - Spring 1994: A series of events and the September 17, 1993 dedication were planned to celebrate the opening of The Meadows at GVSU clubhouse. Memorable events for this period were bad movie nights, murder mystery train, dinner theaters, welcome back reception, holiday celebration parties.

The GVS University Club is now a thriving organization with a membership represented by all employee groups.

Fall 2000 - Summer 2002: Mission statement developed and to be included on all official Club documents. First Club website is developed. Dues increased to $45 per year and to include spouse/partner and immediate family members approved. In honor of his retirement, the Blue Card room at The Meadows clubhouse was renamed the Ronald F. VanSteeland University Club Room. Membership is 426 at the end of this period. 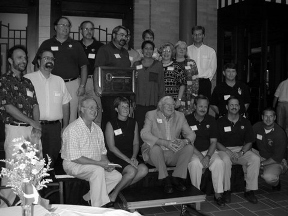 Winter 2007 - Fall 2009: Goals for this period are to increase both membership and attendance at all events. A plan for a membership drive is paramount. An Amendment to the Clubhouse Lease Agreement relieves Club from the balance of Agency Fund debt in exchange for releasing GVSU from clubhouse social space obligation. Membership is 160 at end of this period.

The Club's current goals are to increase membership and events attendance, and to maintain financial stability.

Winter 2010 - Fall 2011: Hospitality and Tourism Management class students cook, manage and host the 2010 annual meeting. Website is updated, and members are encouraged to visit often to stay connected. Board elections are conducted online. Membership is 229 at the end of this period.